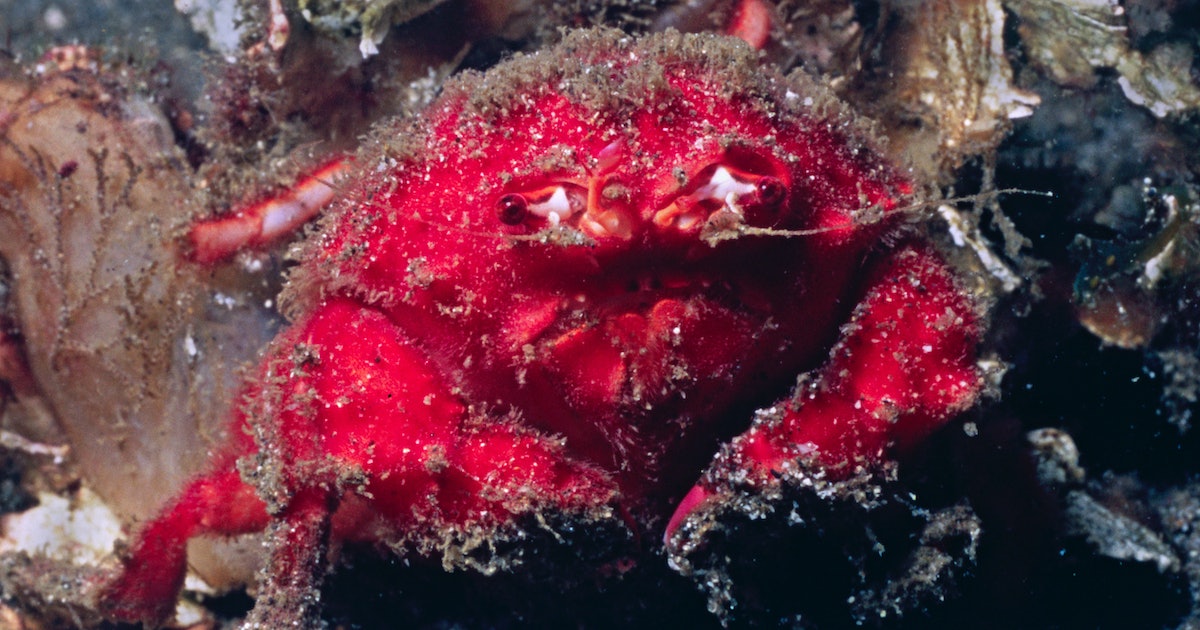 Scientists have long wondered whether there are limits to what evolution can do or if Darwin had the right idea. The truth may lie somewhere between the two.

While there doesn’t seem to be a ceiling on the number of species that might evolve, there may be restraints on how many fundamental forms those species can evolve into. The evolution of crab-like creatures may be one of the best examples of this since they have evolved not just once but at least five times.

Why all the crabs?

Crabs belong to a group of crustaceans called decapods — literally “ten-footed” — since they have five pairs of walking legs. Some decapods, like lobsters and shrimp, have a thick, muscular abdomen, which is the bulk of the animal that we eat. With a quick flick of their abdomen, lobsters can shoot off backward and escape predators.

Crabs, by contrast, have a compressed abdomen tucked away under a flattened but widened thorax and shell. This allows them to scuttle into rock crevices for protection. Evolution repeatedly hit upon this solution because it works well under similar sets of circumstances.

The largest crab group is the Brachyura (true crabs), including the edible crab and Atlantic blue crab. They had an ancestor that was also crab-shaped. Some species have evolved “backward” and straightened out their abdomens again. The other large group is the Anomura (false crabs), with an ancestor that looked more like a lobster.

However, at least four groups of Anomura — sponge crabs, porcelain crabs, king crabs, and the Australian hairy stone crab — have independently evolved into a crab-like form in much the same way as the true crabs. Like true crabs, their compact bodies are more defensive and can move sideways faster.

This means “crabs” aren’t a real biological group. They are a collection of branches in the decapod tree that evolved to look the same.

But crabs aren’t the exception.

Birds of a feather…

Something similar happened in the evolution of birds from feathered dinosaurs. Feathers may have first evolved for insulation, to attract mates, for protecting eggs, and possibly also as “nets” for catching prey. Millions of years later, feathers elongated and streamlined for flying.

Paleontologists disagree about the details, but all modern birds (Neoaves) evolved from ground-dwelling ancestors just after the mass extinction that wiped out the other dinosaurs. However, feathered wings and flight also evolved earlier in other groups of dinosaurs, including troodontids and dromaeosaurs. Some of these, like Microraptor, had four wings.

Unfortunately, we can’t run evolutionary experiments to see if the same things keep happening because that would take hundreds of millions of years. But the history of life has already done something similar to that for us, when closely related lineages evolve and diversify on different continents. In many cases, these ancestral lines repeatedly came up with the same or almost identical solutions to problems.

One of the best examples is our own group, the mammals.

There are two major groups of living mammals. The placentals (including us) and the marsupials (pouched mammals who give birth to tiny young). Both groups evolved from the same common ancestor over 100 million years ago, the marsupials largely in Australasia and the Americas and the placentals elsewhere.

This isolation led to two almost independent runs of the “experiment” to see what could be done with the mammal body plan. There are marsupial and placental versions of moles, mice, anteaters, gliders, and cats. There was even a marsupial wolf (the thylacine, extinct in 1936) whose skull and teeth matched those of the placental wolf in astonishing detail.

It’s not only body forms that evolve independently but also organs and other structures. Humans have complex camera eyes with a lens, iris, and retina. Squid and octopuses, mollusks, and more closely related to snails and clams also evolved camera eyes with the same components.

Eyes, more generally, may have evolved independently up to 40 times in different groups of animals. Even box jellyfish, which don’t have a brain, have eyes with lenses at the bases of their four tentacles.

The more we look, the more we find. Structures such as jaws, teeth, ears, fins, legs, and wings all keep evolving independently across the animal tree of life.

More recently, scientists discovered convergence also happens at the molecular level. The opsin molecules in eyes that convert photons of light into chemical energy and enable humans to see have a tight resemblance to those in box jellyfish and evolved that way in parallel. Even more bizarrely, animals as different as whales and bats have striking convergence in the genes that enable them to echolocate.

Many of the things we like to think to make humans special have been reinvented by evolution elsewhere. Corvids like crows and ravens have problem-solving intelligence and, along with owls, can use simple tools.

Whales and dolphins have complex social structures, and their big brains allow them to develop language. Dolphins use tools like sponges to cover their noses while they forage across stony sea bottoms. Octopuses also use tools and learn from watching what happens to other octopuses.

If things keep evolving in similar ways here on Earth, there’s a possibility they might also follow a related course if life has evolved elsewhere in the universe. It might mean extra-terrestrial beings look less alien and more familiar than we expect.

This article was originally published on The Conversation by Matthew Wills at the University of Bath. Read the original article here.

Charles Darwin believed evolution created “endless forms most beautiful.” It’s a nice sentiment, but it doesn’t explain why evolution keeps making crabs. Scientists have long wondered whether there are limits to what evolution can do or if Darwin had the right idea. The truth may lie somewhere between the two. While there doesn’t seem to…

Charles Darwin believed evolution created “endless forms most beautiful.” It’s a nice sentiment, but it doesn’t explain why evolution keeps making crabs. Scientists have long wondered whether there are limits to what evolution can do or if Darwin had the right idea. The truth may lie somewhere between the two. While there doesn’t seem to…