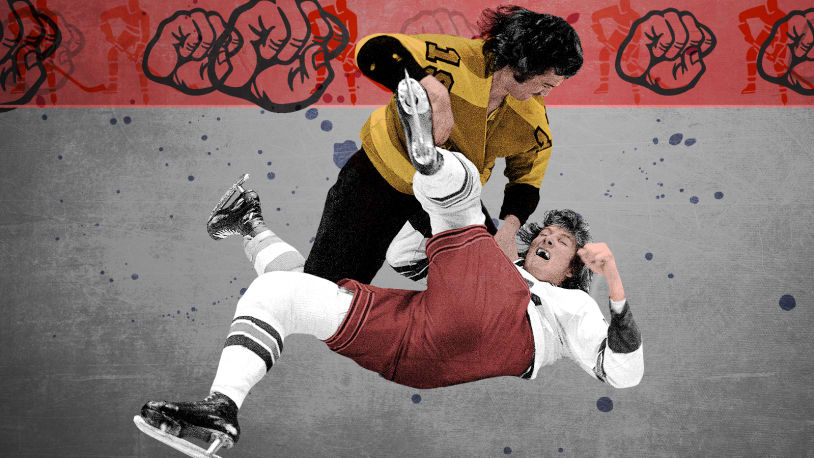 Why fighting is allowed in ice hockey

Fighting is one of ice hockey’s most unique elements, and it is the only sport where throwing punches is not only allowed, but sometimes encouraged. Despite a cooling off in recent years, fighting remains an often integral part of the game. Here’s everything you need to know:

What are the rules regarding fighting in ice hockey?

To someone who has never watched hockey, it may seem that the fights involve two players simply dropping their gloves and pummeling each other. However, fighting in most professional leagues is highly regulated and subjected to standards and penalties.

According to the official rulebook of the National Hockey League, an official fight occurs “when at least one player punches or attempts to punch an opponent repeatedly.” The rulebook also notes that a fight may also occur “when two players wrestle in such a manner as to make it difficult for the linesmen to intervene and separate the combatants.” Fights may also only be between two players, though multiple fights can happen on the ice at the same time.

While the actual definition of fighting may be simple, there is a wide variety of scenarios that may take place during a game, requiring the need for lengthy explanations within the rulebook. One of the most notable is rule 46.11, often called the “instigator rule.” While any player who fights automatically receives a five-minute major penalty, the player deemed to have instigated the fight is subject to additional penalties under this rule. While often cited for causing more problems than solutions, the instigator rule is one of a number of additional regulations that fall under the scope of fighting.

Other portions of the rules outline penalties for rarer scenarios. This can include players who jump off the bench to start a fight, fighting off of the playing surface, and fighting non-player personnel such as coaches (yes, all of this has actually happened before.)

Why is fighting encouraged in ice hockey?

Fighting is technically a violation of the rules, as former NHL referee Kerry Fraser told Insider — it just isn’t normally stopped once two players start. However, much of the reason fighting has made a mark on hockey is part of a code of conduct among players, one that goes back almost as long as the game has been around.

As NBC Sports noted, fights in today’s NHL most commonly start when one player decides to stand up for his teammate, often following a large hit or other physical altercation. However, given the fast-paced and often violent nature of hockey, tempers and emotions often flare. This can cause fights to break out for a variety of other reasons as well, including trash-talking between players and revenge for something that happened in a previous game.

Much of this all goes back to the unwritten code of conduct that exists in the sport. Bleacher Report documented a number of clear-cut rules that, while not written down, are explicitly understood by all players. One such rule notes that avid fighters, often called “enforcers,” should strive to fight players their own size, and that gloves and helmets should be removed prior to the start of the fight to minimize injuries.

This code is understood to be an integral part of hockey, and sometimes players may simply use fights to boost the morale of their team. Oftentimes, the players who fight aren’t even mad at each other. During a game in 2017, the San Jose Sharks’ Brenden Dillon and the Nashville Predators’ Austin Watson were wearing microphones when they decided to fight. As a result, the two could clearly be heard asking each other if they wanted to fight, and then saying, “You done bud?” and “That a boy, good job” when the fight ended.

After they were done throwing punches, the two players could be heard in the penalty box discussing their upcoming summer plans and wishing each other a good rest of the year.

How did fighting in ice hockey get its start?

As previously mentioned, the history of fighting in hockey is almost as old as the game itself — and literally happened the very first time the puck was dropped. The first-ever game of indoor ice hockey, played in Montreal in 1875, was followed by a fight between players and spectators, according to The Hockey News. The first documented fight during a game reportedly occurred in 1890, and fighting was a critical part of the game across amateur leagues by the time the NHL was formed in 1917.

In these early days, the fighting was notably not subjected to rules the way it is now, and physical altercations often turned out much worse. In 1905, a 24-year-old named Alcide Laurin died after being punched and hit in the head with a stick during a game, becoming the first player to die as a result of an on-ice incident. The player who hit him was charged with murder, though he was later acquitted.

As the game continued to grow more physical, and players trained to be bigger and stronger, fighting became more and more common. By the 1990s, the NHL was dominated by heavyweights like Tie Domi, Bob Probert, and Rob Ray, who made it a key part of their repertoires.

How is fighting in ice hockey viewed today?

It is very much still a part of the game, and there is a good chance that a fight could break out at any NHL matchup. However, the practice has re-ented the spotlight in recent years due to concerns over links between fighting and brain injuries.

A number of enforcers, many of whom participated in dozens of fights over their careers, have sadly seen their lives cut short. Todd Ewan, an enforcer from the 1980s, took his own life in 2015, and his wife was convinced there was a connection to his style of play. The aforementioned Bob Probert died of a heart attack in 2010, and it was revealed that his brain showed signs of traumatic injuries. This is, unfortunately, just a small sampling of the fighting-prone players who have died at an early age.

With this being said, fighting in hockey has grown significantly more controversial, and some have called for it to be abolished. However, given that it is so deeply ingrained in the sport, it is unlikely that fighting will be completely stopped any time soon. It is becoming clear, though, that players are much more conscious of their health than they were in decades past, and statistics show that fighting is becoming much less commonplace.

ESPN reported there were less than 200 NHL games that featured fights during the 2018-19 season, the first time in the modern era that the number had gotten that low. Compare this to the 2006-07 season, in which at least 384 games featured at least one fight, or 31.2 percent of the season total.

So while the number of fights is significantly smaller than even a decade ago, there is no question that the fisticuffs remain in hockey, and Rodney Dangerfield’s old adage still applies: “I went to a fight and a hockey game broke out!”

Fighting is one of ice hockey’s most unique elements, and it is the only sport where throwing punches is not only allowed, but sometimes encouraged. Despite a cooling off in recent years, fighting remains an often integral part of the game. Here’s everything you need to know:  What are the rules regarding fighting in ice…

Fighting is one of ice hockey’s most unique elements, and it is the only sport where throwing punches is not only allowed, but sometimes encouraged. Despite a cooling off in recent years, fighting remains an often integral part of the game. Here’s everything you need to know:  What are the rules regarding fighting in ice…

What are the Nazca Lines?

The most unforgettable film and TV moments of 2022