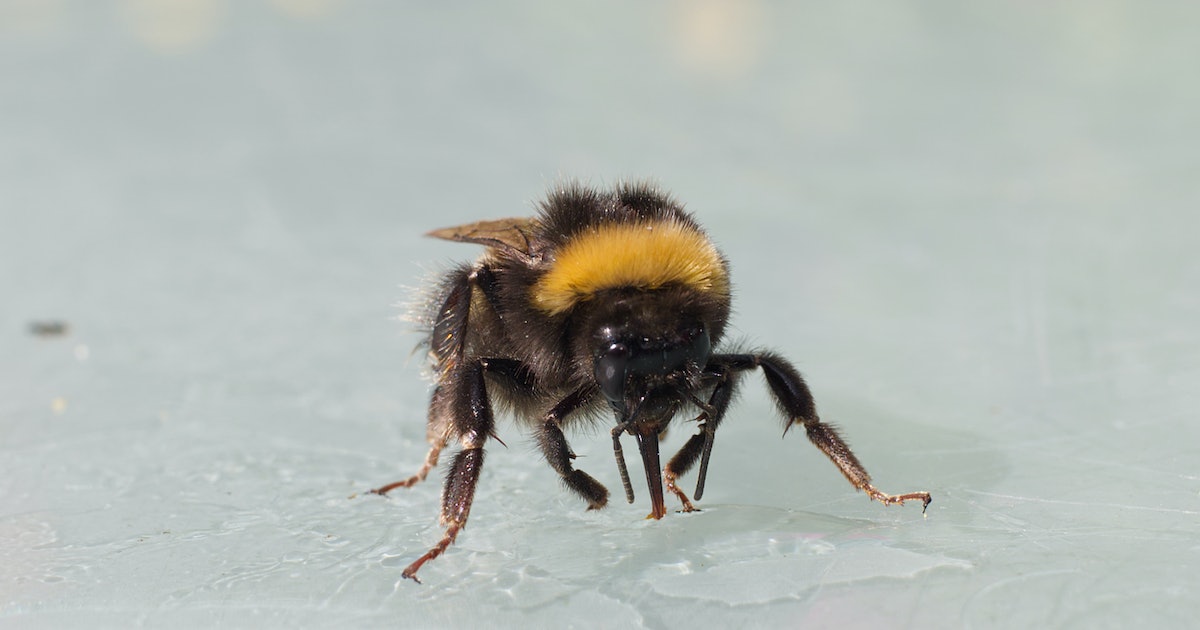 Can insects feel pain? Here’s why we need to talk about bug rights

At least a trillion insects are killed annually for food and animal feed. Common slaughter methods include extreme heat and cold, often preceded by starvation. By comparison, “only” around 79 billion mammals and bird livestock are slaughtered annually.

Scholars have long recognized that the survival value of pain means many animals experience it, supposedly with the exception of insects. But we surveyed more than 300 scientific studies and found evidence that at least some insects feel pain. Other insects, meanwhile, haven’t been studied in enough detail yet.

We also carried out our own study into bumblebees’ response to potentially harmful stimuli. The way they reacted to the stimuli was similar to pain responses in humans and other animals we accept feel pain.

Pesticides kill trillions more wild insects every year. The actual cause of death is often paralysis, asphyxiation, or dissolving of the internal organs, sometimes over several days.

If insects feel pain, insect farming and pest control will cause mass suffering. Yet animal welfare debates and laws almost universally ignore insects. One reason is that, historically, insects were often viewed as too simple with too short a lifespan. But evidence that insects feel pain is accumulating.

The question of whether insects feel pain is hard to answer. Pain is an inherently private experience. The difficulty of diagnosing pain when the being in question can’t talk is illustrated by the relatively recent treatment of babies during surgery.

As recently as the 1980s, many surgeons believed babies could not feel pain and rarely used anesthetics because they thought babies’ obvious responses, such as screaming and writhing, were “just reflexes.” Even though we still do not have proof babies feel pain, most now accept that they do with near certainty.

For any being that cannot directly communicate its suffering, we need to rely on common sense and probability. The more pain indicators found, the higher the probability. It is important to use consistent criteria across animals and to look for the same behavioral indicators of pain in insects as one would use in a cow or pet dog.

Pain in the brain

Most animals display “nociception” — the processing of harmful stimuli which can result in reflex-like responses. Scientists have long known that insects display nociception. However, if an animal detects potentially damaging stimuli, it is not necessarily an indicator of “ouch-like” pain that in humans is generated in the brain. Both nociception and pain can happen, to some extent, independently of each other.

In a recent study, we discovered bumblebee responses to heat depend on other motivations. We gave bumblebees four feeders: two heated and two unheated. Each feeder dispensed sugar water, which bumblebees love.

Bees also remembered the heated and unheated feeders, and they used this memory to decide which to feed from. So the trade-off happened in the brain.

Insect brains change their behavioral responses to harm in other ways. For example, hungry flies are less likely to jump away from extreme heat than satiated flies. Decapitated flies can still jump, but they do not display this difference, demonstrating their brain’s involvement in heat avoidance. Communication between the brain and the responsive body part is also consistent with pain.

The framework we used to evaluate evidence for pain in different insects was the one that recently led the UK government to recognize pain in two other major invertebrate groups, decapod crustaceans (including crabs, lobsters, and prawns) and cephalopods (including octopuses and squid), by including them in the Animal Welfare (Sentience) Act 2022. The framework has eight criteria, which assess whether an animal’s nervous system can support pain (such as brain-body communication) and whether its behavior indicates pain (like motivational trade-offs).

Flies and cockroaches satisfy six of the criteria. According to the framework, this amounts to “strong evidence” for pain. Despite weaker evidence in other insects, many still show “substantial evidence” for pain. Bees, wasps, and ants fulfill four criteria, while butterflies, moths, crickets, and grasshoppers fulfill three.

Beetles, the largest group of insects, only satisfy two criteria. But, like other insects that received low scores, there are very few studies on beetles in this context. We found no evidence of any insect failing all the criteria.

In response, the UK government included both octopuses and crabs in the Animal Welfare (Sentience) Act 2022, legally recognizing their capacity for pain.

The UK government set a precedent: strong evidence of pain warrants legal protection. At least some insects meet this standard, so it is time to shield them. For starters, we recommend including insects under the Animal Welfare (Sentience) Act 2022, which would legally acknowledge their capacity to feel pain. But this law only requires the government to consider their welfare when drafting future legislation.

If we want to regulate practices such as farming and scientific research, the government needs to extend existing laws. For example, the Animal Welfare Act 2006 makes it an offense to cause “unnecessary suffering” to animals covered by the act. This may lead to insect farms, like conventional farms, minimizing animal suffering and using humane slaughter methods.

The Animals (Scientific Procedures) Act 1986 regulates the use of protected animals in any experimental or other scientific procedure that may cause pain, suffering, distress, or lasting harm to the animal. Protecting insects under this act, as octopuses already are, would regulate insect research, reducing the number of insects tested and ensuring that experiments have a strong scientific rationale.

At least a trillion insects are killed annually for food and animal feed. Common slaughter methods include extreme heat and cold, often preceded by starvation. By comparison, “only” around 79 billion mammals and bird livestock are slaughtered annually. Scholars have long recognized that the survival value of pain means many animals experience it, supposedly with…

At least a trillion insects are killed annually for food and animal feed. Common slaughter methods include extreme heat and cold, often preceded by starvation. By comparison, “only” around 79 billion mammals and bird livestock are slaughtered annually. Scholars have long recognized that the survival value of pain means many animals experience it, supposedly with…

What can my pet eat during the holidays? You might be surprised