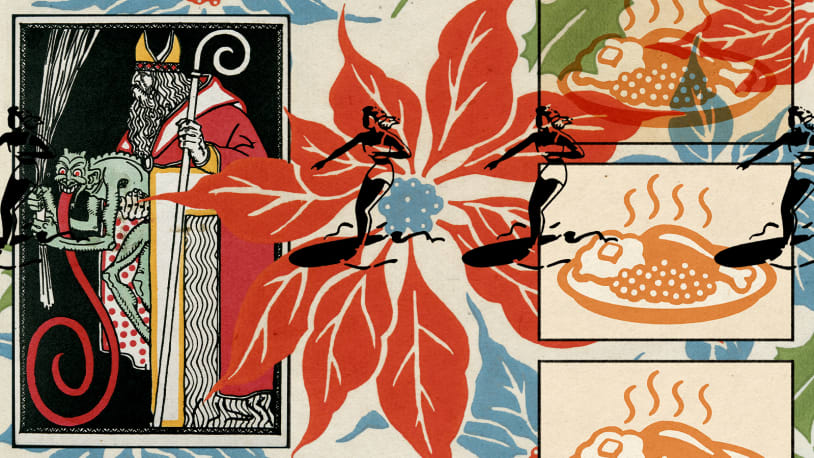 The most interesting holiday traditions around the world

Have you ever wondered what holiday traditions and rituals exist around the world? Well, you’re in luck — we’ve rounded up a few of them below:

In Austria, Germany, Hungary, Slovenia, and the Czech Republic, the terrifying Krampus is the frightening counterpart to the beloved St. Nicholas. Half-man, half-goat with horns and fangs, Krampus punishes naughty kids by dragging them into the underworld.

The character comes from Eastern European folklore and is said to scare children into behaving. Children put a shoe outside their front door on Dec. 5, dubbed Krampusnacht, or Krampus Night. If a child was good that year, Krampus leaves them a present; if they were naughty, they get a rod. Eastern Europeans also celebrate with so-called “Krampus runs,” where men dress up as Krampus and chase people through the streets.

The Caganer in Spain

The Caganer, which translates to “the defecator” in English, is a figurine of a person doing … just that within a nativity scene. Though the traditional figurine is a man with a red hat, the caganer has nowadays become more of a gag, made to look like celebrities and characters.

Experts posit that the tradition originated in Catalonia in the 18th century, mainly in the farming community. Farmers saw the caganer as a symbol of fertility (since manure is made of excrement, after all) and hoped it would promote a fruitful harvest. But other experts think the figurine could represent a belief of early Christianity known as “Incarnation” — that God must be fully incarnated, or embodied, in human flesh to redeem humanity, Vox explains. And all humans poop, don’t they?

Though the U.S. tends to celebrate Christmas with ham, Japan celebrates with Kentucky Fried Chicken from KFC. For the chain’s Japanese stores, the busiest day of the year is Christmas Eve. In 2018, for example, KFC Japan brought in roughly $63 million just between Dec. 20 and Dec. 25. Outlets across the country even dress their life-size statues of Colonel Sanders as Santa Claus to ring in the holiday season.

The tradition dates back years, following a period of rapid industrialization and globalization in Japan. The country’s fast food industry skyrocketed between the 1970s and 1980s, and KFC was most certainly in on the action, having opened up 324 stores by 1981. And at the time, Christmas was (and remains) a secular holiday in Japan, meaning most people lacked specific holiday traditions. But KFC capitalized on that gap in the market, launching a “Kentucky for Christmas” ad campaign that took off. Now, the chain’s crispy fried chicken is a staple in many Japanese Christmas celebrations.

La flor de nochebuena, known as the poinsettia in English, is a prolific symbol of Christmas in the U.S. But its connection to the holiday is rooted in a Mexican legend, in which a young girl without a gift for baby Jesus offers him weeds. Angels, in a show of compassion for the girl, then transform the weeds into poinsettias.

Today, many Americans decorate their homes with poinsettias during the holiday season. The flower is also beloved for its star-like appearance, which many associate with the star of Bethlehem. The plant initially made its way to the U.S. after Joel Roberts Poinsett, a statesman and the first American ambassador to Mexico, discovered the gorgeous red flower on a trip and sent some cuttings back to South Carolina to be propagated and later shared with growers nationwide.

On Jan. 5, Italians might be visited by Befana, an old woman who doles out presents like Santa Claus but is said to resemble a witch who rides a broomstick. Her festive offerings celebrate what is known as The Feast of the Epiphany, which, in Italy, marks the day the three Wise Men arrived at Jesus’ manger. It also signifies the end of the Christmas season.

There are a number of stories about Befana’s origins. Some say she housed the Wise Men on their way to visit Jesus, and unsuccessfully tried to follow them after they left. She’s still searching for the pack to this day, but finds time to drop off treats for nice kids and coal for naughty ones. But others say Befana actually traveled to see baby Jesus on her own, mangled by grief and of the mind he was actually her late son. Pleased by the gifts she brought, Christ then made Befana the mother of all Italian children.

Nowadays, the Italian town of Urbania hosts a yearly Befana festival with tens of thousands in attendance. Many even dress up as Befana herself.

Many Ukrainians adorn their Christmas trees with fake spider webs, a tradition with roots in Ukrainian legend: When a widow and her children couldn’t afford to decorate their own Christmas tree, the spiders in their house did it for them, threading gorgeous, silky webs around the tree’s branches. From that day forward, the widow wanted for nothing.

Today, many Ukrainians still decorate their trees with artificial spider webs or spider web ornaments to keep the tradition alive. The webs also act as a good luck charm and symbol of gratitude.

Known as “burning the devil” in English, this Guatemalan tradition involves building bonfires outside of peoples’ homes as a ritual to cleanse evil spirits. It takes place on Dec. 7 at 6 p.m. sharp every year. People gather up trash from their houses and torch the heap out front to “burn the devil” that might have been hiding inside.

According to experts, la quema del diablo can be traced back to colonial times. Though there has been some backlash recently over its potential environmental impacts, the ritual marks the beginning of the holiday season for Guatemalans and continues to be a celebrated tradition.

The beach in Australia

For those down under, it is actually quite common to visit the beach on Christmas. And no, it’s not cold — Australia experiences Christmas during the summer, meaning locals trade in white snow for white sand. The prospect of a tropical December vacation has also proven a valuable source of tourism for the country.

Have you ever wondered what holiday traditions and rituals exist around the world? Well, you’re in luck — we’ve rounded up a few of them below: Krampus in Eastern Europe In Austria, Germany, Hungary, Slovenia, and the Czech Republic, the terrifying Krampus is the frightening counterpart to the beloved St. Nicholas. Half-man, half-goat with horns…

Have you ever wondered what holiday traditions and rituals exist around the world? Well, you’re in luck — we’ve rounded up a few of them below: Krampus in Eastern Europe In Austria, Germany, Hungary, Slovenia, and the Czech Republic, the terrifying Krampus is the frightening counterpart to the beloved St. Nicholas. Half-man, half-goat with horns…

Why Russia is relying on Wagner Group mercenaries in Ukraine

The sounds of the season