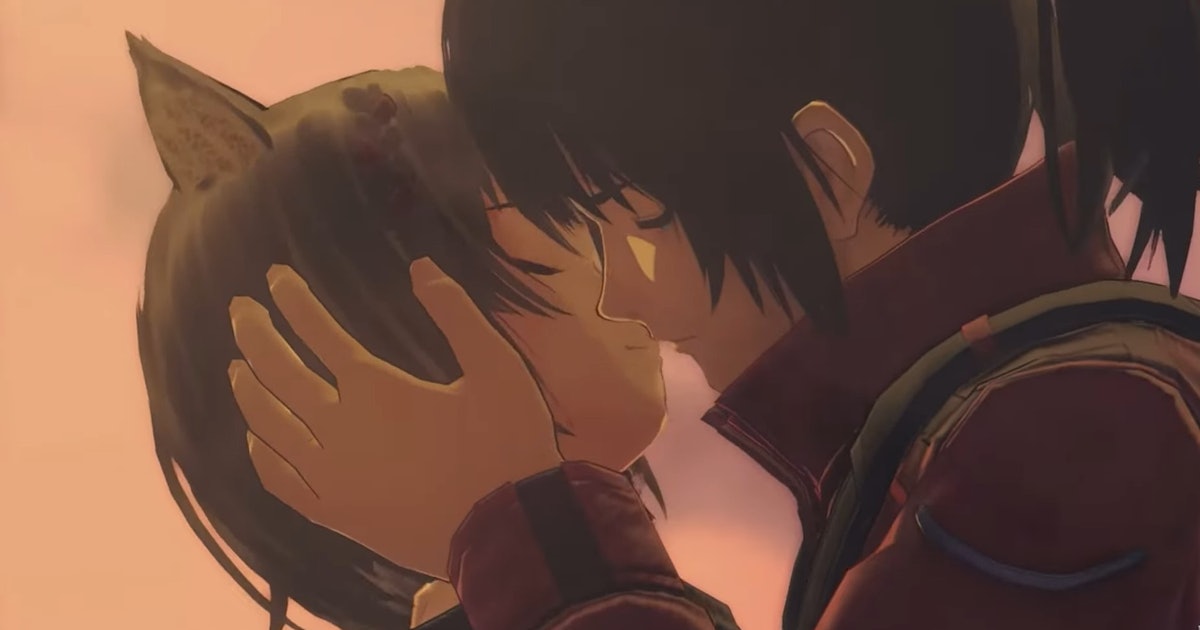 At its heart, Xenoblade Chronicles 3 is a story about how a troubled world finally found peace. However, amid dreary themes like death and mourning, it can’t help but make my heart skip a beat with the unforgettable romance between its two leads.

Xenoblade creator Tetsuya Takahashi always has a place for love in his works. Xenoblade 3 especially embodies this “red string of fate,” or idea that two soulmates will always find their way to each other, with its cycle of rebirth.

Both parties in these kinds of stories typically have such strong feelings for each other that, even if fate is against them, they will find a way to be together. Often there are stories where more than one version of those two people exist, where they still manage to choose each other despite their differing circumstances. In short, these two people are together forever, even across multiple lifetimes and dimensions.

Spoilers for Xenoblade Chronicles 3 ahead.

Meet Noah and Mio, who go from foes to friends in the first chapter of the story. Noah leads the Kevesi special ops group, which includes his childhood friends, Lanz and Eunie. Mio leads the Agnes side with her teammates, Sena and Taion. The opposing teams are forced to cooperate in a fight against the major villain, during which they gain the power of Ouroboros.

Noah and Mio are the first to activate their powers, possibly because of their shared values as off-seers. It’s palpable in their first meeting, where Noah tries to get through to Mio during their duel and voices his distaste for how their world forces them to constantly fight. Then, Guernica unleashes the power of Ouroboros from a magic egg. Noah and Mio merge into a superpowered being where they can feel each other’s thoughts and memories — and so it begins.

After the encounter, Moebius brainwashes their colonies into seeing them as enemies. Noah, Mio, and their friends reluctantly agree that their best chance of survival is with each other. So it’s only reasonable that the story would focus on building relationships between each pair of Ouroboros partners. In Noah and Mio’s case, it ends up being a romantic one.

Xenoblade Chronicles 3 paces their relationship as if it were a movie. It shows how Mio feels about her impending “homecoming” with her interactions with others, and how it bubbles over into a conversation with Noah in one of the game’s most iconic cutscenes. It’s this finiteness in their relationship that acts as one of the main stressors and need for urgency during the journey. If they don’t defeat Moebius or find a way to break the rebirth cycle in the time Mio has left, then she will disappear. Her death might seem like a problem unique to their timeline, but it’s apparently one that’s happened before, over multiple lifetimes.

N and M, the Moebius versions of Noah and Mio, took their desire to be together forever to the extreme. Members of Moebius can exist outside of the confines of a lifetime. They are essentially “gods” that can continue existing forever, so long as they force others to fight and harness the energy from the bloodshed.

M was the one to break out first after switching places with Mio before her homecoming. N was distraught at the reveal but ultimately comes to respect Noah and Mio for risking what he and M didn’t: the ultimate good of humanity in exchange for an eternity of togetherness. However, not for a second does Takahashi make us believe that Noah and Mio will truly part. They promise to find each other, and it seems like they do based on the epilogue. Noah hears the sound of a flute while running in the town square and sets off to find it.

Xenoblade fans know that the series treats souls as if they are tangible forces. It’s a “spiritual element” in how the world works.

“The world of Xenoblade has always been pretty malleable to human desires,” one Redditor writes, “hence multiple protagonists pulling god-killing swords out of thin air and pure intentions. This strikes me as another form of that.”

It also builds on an idea from Xenosaga and the past Xenoblade games, where characters are connected through more than one life. One article lists all the ways the games overlap with each other, including the reoccurring theme of reincarnation and how the souls remain connected even in another life. (Fei and Elly of Xenogears crawled so that Noah and Mio could walk.)

Takahashi called Xenoblade Chronicles 3 a “culmination” of his past works. Or, as Kotaku describes it, it’s his “most potent love story yet.”

At its heart, Xenoblade Chronicles 3 is a story about how a troubled world finally found peace. However, amid dreary themes like death and mourning, it can’t help but make my heart skip a beat with the unforgettable romance between its two leads. Xenoblade creator Tetsuya Takahashi always has a place for love in his…

At its heart, Xenoblade Chronicles 3 is a story about how a troubled world finally found peace. However, amid dreary themes like death and mourning, it can’t help but make my heart skip a beat with the unforgettable romance between its two leads. Xenoblade creator Tetsuya Takahashi always has a place for love in his…

Sorry, ‘metaverse’ is the word of the year whether you like it or not