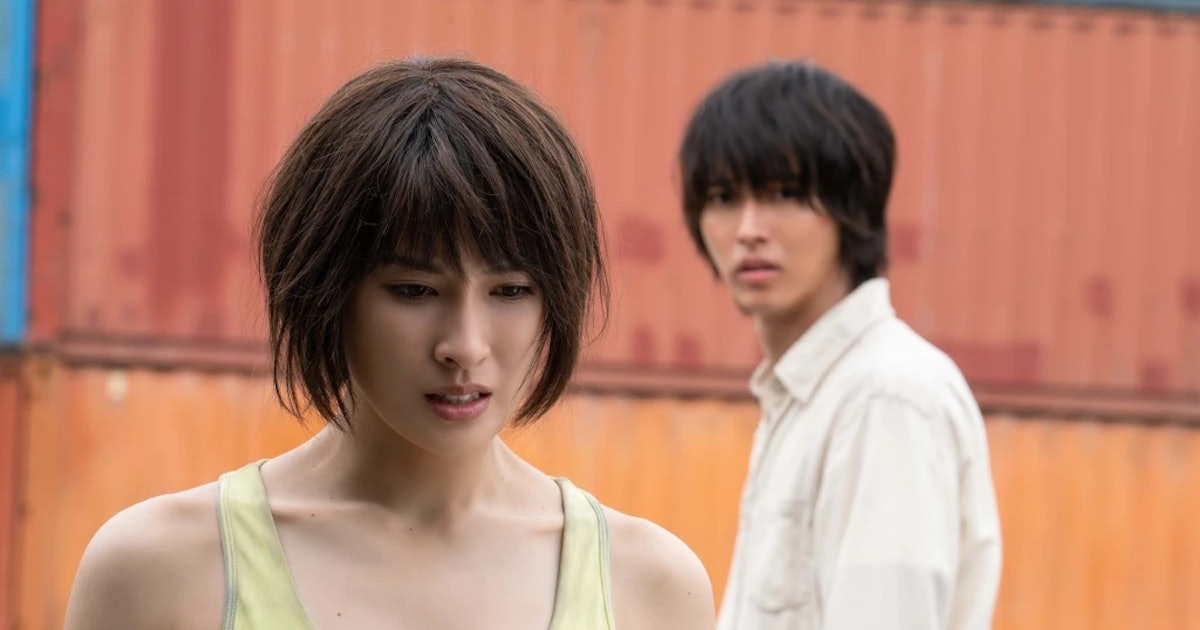 What that wild finale really means

Alice in Borderland is back on Netflix, just in time to celebrate the holidays. While the first season of the Japanese deadly competition thriller, which hit Netflix in December of 2020, adapted roughly the first 31 chapters of Hara Asu’s manga, the second season covers the final 33 chapters. This means that — while there is always a chance for more seasons of the live-action adaptation, especially if this batch of episodes does well — Season 2 wraps up the story of Arisu’s traumatic time in Borderland in a definitive way.

Let’s break down everything that happened at the end of Alice in Borderland Season 2.

Spoilers for Season 2 of Alice in Borderland.

How did Alice in Borderland Season 2 end?

It all started with fireworks, or so we thought. As Ariusu, Chota, and Karube run into the subway station at Shibuya Crossing in the very first episode of Alice in Borderland, fireworks explode in the sky above the city. Later, a woman Kaito Kameyama interviews for his documentary says she remembers “fireworks that weren’t really fireworks” when they all came to Borderland. As we learn in the Season 2 finale, what first appeared to be fireworks in the sky over Tokyo was actually a meteorite. The space debris hits and explodes in the Shibuya area of the city, instantly killing many and sending others — i.e. many of the characters we meet in Borderland — to fight for their lives.

This twist has a place in Japan’s cinematic history. From Godzilla to Your Name, Japan has a history of using both natural and manmade disasters as subject matter in its genre storytelling. Because of climate and topography, the island nation is particularly vulnerable to natural disasters like tsunamis and earthquakes. The country also has the collective trauma of the U.S. dropping two nuclear bombs on its cities during World War II, which immediately killed an estimated 120,000 people and led to another estimated tens of thousands deaths from radiation exposure.

Borderland is a kind of purgatory. The critically injured victims of the Tokyo Meteorite Disaster fight for their lives in Borderland, which is some kind of liminal space between life or death. Everyone Arisu meets in Borderland was also in Shibuya that day (e.g. we see Tatta in a work truck, and Ann and Kuina crossing the busy street), and are victims of the same disaster, causing their hearts to stop. This is what brings them to Borderland, where time passes very differently. The players’ hearts may only be stopped for a minute in the real world, but, in Borderland, many days pass.

The reason for the players’ transport to Borderland ties into Arisu’s central internal struggle to find a motivation to live. “I hope you find it soon,” Kyuma tells Arisu in the third episode of the season, shortly before the likable nudist dies himself. “I hope you find your own true reason for living. Not just someone else’s.” For some in Borderland, the fight for survival is taken out of their hands — stricken down by one of the King of Spades’ bullets or a laser from the sky — but there seems to be a degree of intention or free will at play here, too. Some people in Borderland choose to end their own lives. And Arisu’s journey, at least, is as much about surviving his depression and survivor’s guilt as it is about clearing the games. This gives the story a thematic depth and relatability that elevates it above a plot-driven story of survival.

Who is running Borderland? Citizens and dealers explained

Much of Alice in Borderland Season 2 was devoted to exploring the role of “dealers” and “citizens” in Borderland. At the end of Season 1, we discover that Momoka and Asahi are “dealers,” people who have been recruited to make and monitor the games in exchange for extended visas and the hope they might eventually be able to leave Borderland. In a Season 2 flashback to the events of the Witch Hunt, we see Momoka tell Kuzuryu, aka the King of Diamonds, that she has volunteered to kill herself for the Witch Hunt because she wants to live (or, in this case, die) by her ideals. She believes that humanity is good, and that her death as the “witch” won’t lead to a massacre. (Um … it does.)

While we don’t learn much more about dealers in Season 2, we do learn about citizens, people who have chosen to stay in Borderland as permanent residents at the end of the previous “cycle.” Kyuma, aka the King of Clubs, is the first citizen we properly, knowingly meet. He and his friends/bandmates have accepted citizenship in Borderland, a choice we will only fully understand with the season’s ending. All of the face cards are citizens, whose job it is to host a game in the second phase of Borderland. (The first phase being the numbered-card games that the Borderland players collectively clear in Season 1.) In a flashback, we see the man who would become the King of Spades accepting the position at the end of the previous cycle; it is implied that, before becoming the face card-killer, he was someone like Aguni, fighting to take down the previous King of Spades. If Aguni chose to stay in Borderland, he would be a good candidate to become the next King of Spades.

Though it initially seems that Mira may be the chief organizer of Borderland, she is revealed to be another citizen like the other face cards. She is the Queen of Hearts, and almost succeeds in defeating Arisu and Usagi in a game of croquet that is actually a psychological battle designed to make Arisu give up. As Mira outlines in the rules, Arisu can only lose the game if he doesn’t finish. She begins her psychological warfare by spinning tales — featuring everything from aliens to far-future VR — about the true purpose of Borderland. When that doesn’t work, Mira makes Arisu believe he is in a mental health hospital, struggling to overcome the survivor’s guilt that came when Chota and Karube died, hit by a car, at Shibuya Crossing.

It is eventually Usagi who pulls Arisu out of his depressive cycle, slitting her own wrist and asking Arisu to keep living. “The answer. The reason for living. Forget about those things, Arisu,” Usagi tells Arisu desperately, trying to save both of their lives. “The answer is different for everyone. A reason for living … it doesn’t matter if you have one or not. This whole time we’ve searched, we’ve been searching together. That alone was enough.” More than the meteorite explanation or the reveal of what Borderland truly is, this is the conclusion Alice in Borderland reaches as a show — its own reason for existing as a story.

Who lives and who dies?

Arisu does complete that game of croquet, though Mira technically wins the lawn game. She is lasered, the fate for any face card-citizen who loses in the game they host. This means that all of the face cards — all of the cards — have been cleared and those players who have survived have a choice to make. They can stay in Borderland as a citizen, or not. Borderland does not explain what choosing “not” entails, but most of our protagonists make the same choice: “I don’t want it.”

Arisu, Usagi, Aguni, Heiya, Chishiya, and even Niragi all reject citizenship, and wake back up in the real world. (Mr. Yaba and Banda, two characters who revel in the violent abuse of power Borderland allows even more than our real world, choose to stay.) Ann, who seemingly dies in Borderland and therefore is unable to make a choice, survives; in the hospital, we see the doctors successfully able to restart her heart.

Players return to the real world, and forget Borderland

The players who rejected citizenship in Borderland awaken back in the real world, to find out they are survivors of a horrific meteorite disaster. Their hearts stopped, and that is the time they spent in Borderland. Chishiya and Niragi, who were bleeding out side by side in Borderland, are even in the same hospital room. We get to see the emotional reunion between Kuina and the mother who supported her (and the father who didn’t). We get it confirmed that Arisu’s best friends, Karube and Chota, did die in the meteorite disaster.

The characters don’t remember their time in Borderland, which is honestly probably for the best; they all suffered so much trauma there, and going through a meteorite strike seems like enough to deal with. That being said, those who made a connection in Borderland seem to recognize something in one another. Heiya pauses by Aguni’s hospital room, drawn to the person who protected her and whom she protected in Borderland. While some may read Borderland as simply a hallucination or dream Arisu had while fighting for his life, I don’t think the show sees it that way; the way these characters respond to one another post-Borderland, and the interiority we see from so many disparate characters within Borderland through flashback, suggests that this series believes that Borderland exists.

The proof is in Arisu and Usagi: Because of their Borderland connection, or perhaps because they simply like one another, the two strike up a flirty conversation by the vending machine in the hospital. The episode ends with them going for a walk together. We know from the manga sequel that these two crazy kids eventually get married.

What does the Joker card mean?

While a playing card deck may have 52 cards, it traditionally also comes with a Joker card that is unlike any other card in the deck. The Joker as a card originated in the U.S. during the Civil War and was originally created as a trump card in the trick-taking game of Euchre. Today, it is often used as a wild card in games, but can also function as a top trump card, a skip card, the lowest-ranking card, the highest-ranking card, or a card of different value from the rest of the pack.

What could this mean for Alice in Borderland? In the manga, the Joker is a mysterious character, implied to be a kind of Borderland ferryman. He has yet to properly appear in the TV series, but the way the camera lingers on the card as the final shot of the series suggests that this game is far from over. The Joker, our ferryman to Borderland, still exists, which means Borderland is still there, just beyond the veil of our world.

Alice in Borderland is streaming on Netflix.

Alice in Borderland is back on Netflix, just in time to celebrate the holidays. While the first season of the Japanese deadly competition thriller, which hit Netflix in December of 2020, adapted roughly the first 31 chapters of Hara Asu’s manga, the second season covers the final 33 chapters. This means that — while there…

Alice in Borderland is back on Netflix, just in time to celebrate the holidays. While the first season of the Japanese deadly competition thriller, which hit Netflix in December of 2020, adapted roughly the first 31 chapters of Hara Asu’s manga, the second season covers the final 33 chapters. This means that — while there…

Behold! The making of Netflix’s 'My Father’s Dragon'