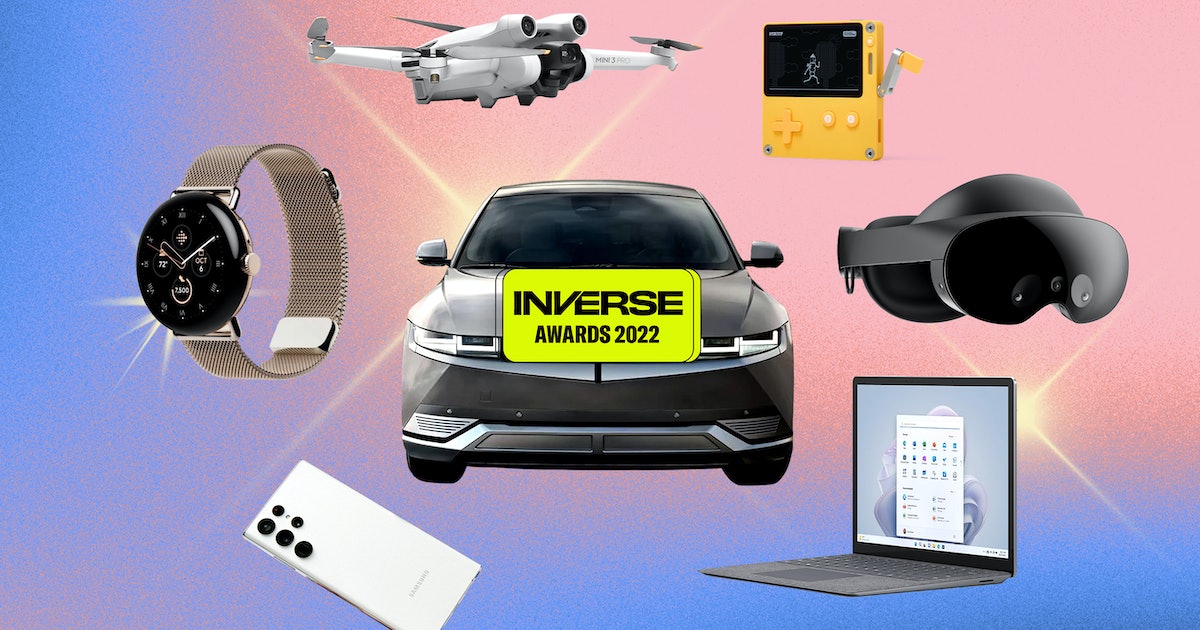 Technology is reshaping the world faster and more frenetically than ever.

Our Swiss Army Knife smartphones, now nearing their final slab form factors, got more polished. Handheld gaming, largely fueled by the Steam Deck, waltzed into the spotlight. And EVs — be they electric cars or personal mobility like e-bikes and e-scooters — are really starting to redefine the definition of transportation while changing lifestyles in both cities and suburbs.

Even amid significant supply chain issues holding up production, 2022 managed to see some notable tech product releases. Everyone no doubt has their personal “best list” but looking back at the year, these are the ones we strongly feel moved the needle and made a mark on the massive world of consumer tech.

Setting its steep $1,500 price aside and Meta’s falling stock, there is no question that the Quest Pro is cutting edge for VR and mixed reality applications. The headset’s technology is a potential early adopter’s look into the next wave of head-worn computing.

We knew Nothing was going places with its distinctly transparent Ear 1 wireless earbuds and Phone 1 smartphone. Like those devices, the Ear Stick brings a breath of fresh air to what are clearly mature product categories. If tech feels boring these days, then strong design is certainly an antidote.

The sibling to the Galaxy Z Fold 4, Samsung’s Galaxy Z Flip 4 won by default on the smaller foldable phone front. Even without many must-have changes over the Z Flip 3, the Z Flip 4 polished up the hardware and software to the point where we can confidently recommend it if you’re curious about the form factor.

EVs may get all the attention, but e-bikes are arguably just as important when it comes to the burgeoning world of electric mobility. At the center of that are companies like Super73, which puts out pricey, but high-quality e-bikes like the Super73-Z Miami — a lightweight and feature-rich commuter bike that turns heads on the street.

Say what you want about its four-year-old design, Microsoft’s massive 28-inch touchscreen all-in-one desktop PC still looks and functions like it’s from the future. For illustrators or designers, the more powerful CPU and GPU are enough to merit dropping serious cash on the Surface Studio 2+.

When it comes to active noise-canceling over-ear headphones, Sony has always been No. 1 for several years running. The WH-1000XM5 continue Sony’s streak with the best ANC in any pair of wireless headphones. The new design, more premium ear cushions, and better microphone quality make these unmatched.

While no Galaxy S22 Ultra, Google’s Pixel 7 Pro deserves props, too. For the best “Google” vision of Android hardware and software, the Pixel 7 Pro hit the mark. Google’s lean into AI and machine learning is on full display in this phone, and is an example of how it’s trying to solve real-world problems with intelligent software.

DJI is unmatched when it comes to consumer drones. At just 249 grams, the Mini 3 Pro just sneaks in under the FAA weight limit that requires a drone license to fly it. But its compact size doesn’t mean major tradeoffs: it shoots 4K at 60 fps and has essential features like obstacle detection, along with myriad modes that make flying DJI drones so easy.

Microsoft didn’t upgrade the Surface Pro 9 design from the Surface Pro 8, which was based on the Pro X, but it didn’t need to because the hardware was already ahead of the curve. The new 12th Gen Intel chip or Arm-based Microsoft SQ3 chip (if you’re into that) does not seem like much, but the performance boost makes the 2-in-1 tough to beat. There are tons of 2-in-1s to choose from, but the original remains the king.

Here in the U.S., Samsung is the only credible foldable phone maker. That may change next year, but in 2022, the Galaxy Z Fold 4 was the biggest baddest phone/tablet foldable available. The most notable upgrade is the camera system — finally flagship level.

With the M1 chip, Apple paved a new path forward for MacBooks without Intel or AMD’s x86 chipset architectures hindering its designs. The Mac Studio arrived at the end of the M1 chip cycle, but similarly redefined desktops with its immense power, compact design, and silent operation. The highest-configured chipset, the M1 Ultra, is two M1 Max chips bolted together to deliver a CPU with up to 20 cores, a GPU with up to 64 cores, up to 128GB of unified memory, and 8TB of SSD. Desktop computers with the Mac Studio’s raw power are typically much larger, but Apple created the seemingly impossible.

After years of letting its partners sell Wear OS smartwatches, Google planted its flag with the Pixel Watch. Its stone-smooth rounded display is a stark contrast to the Apple Watch and its built-in Fitbit sensors and tracking are a clear shot at Apple’s fitness and health offerings. At a time when Apple and Samsung practically own the smartwatch space, Google’s entrance is greatly welcome.

Say what you want about the Phone 1’s mid-range chip, but there’s no arguing that Nothing’s transparent Android phone has pizazz. Nothing’s first smartphone is literally flashy with its Glyph LED interface, but the clean and responsive Android 12 software allow this phone to punch way above its weight. The phone world needed the Phone 1, and Nothing delivered (except in the U.S. where it’s not yet sold).

Solar-powered cars may sound like future tech, but if you’ve been paying attention you’d know that they’re not just here, they’re equally as cool as they sound. The Lightyear 0 gets about 388 miles of range on a single charge with solar panels adding (on average) about 40 miles of range. Yes, it costs an eye-watering $296,000, but as a purchasable proof-of-concept for solar EVs, it’s hard not to qualify the Lightyear 0 as anything other than exciting.

Routers will never be sexy, but if we have to pick one that elegantly blends form and function, it’d be the Nest Wifi Pro. The glossy plastic feels like a step back from the previous-gen matte, but the inclusion of Wi-Fi 6E and Matter support mean this is a fast and future-proof router. And, obviously, it doesn’t look like an alien spaceship ready to colonize your living room.

Apple’s MacBook Air refresh also introduced the company’s second-generation M2 silicon. The thin-and-light computer finally drops its tapered design in favor of a uniform chassis that resembles the 14- and 16-inch MacBook Pros. Most people don’t expect a MacBook Air to handle multiple streams of 4K and 8K ProRes video playback, and yet, the M2 can do so without choking. More than just a gorgeous metal clamshell, the M2 MacBook Air is a showcase of how game-changing Apple silicon continues to be.

Looking at this list, one thing is obvious: many of the gadgets here played it safe in 2022. Panic’s Playdate did not. From the hand crank, to the black-and-white display, to the way games are delivered weekly, the bright yellow handheld reminded us that tech can and should be whimsical and fun. It doesn’t need to be bare aluminum and unapologetic minimalist software.

The best smartwatch got a bigger sibling in the form of the Apple Watch Ultra. While not for everyone, Apple’s biggest smartwatch doesn’t feel as chunky as it looks thanks to its lightweight titanium case. A larger, more durable flat sapphire screen is one of many standout features. The Action Button and longer battery life justify its higher price.

Once again, Samsung made the best Android phone of the year. The Galaxy S22 Ultra brings back the S Pen from past Galaxy Note phones, flattens out the display edges, and improves the image processing for its impressive five-lens camera system. There is no better premium Android phone. Period.

Keychron followed up last year’s terrific 75 percent Q1 with the equally fantastic 65 percent Q2 mechanical keyboard. This keyboard is notable for its price-to-feature ratio — and 11 months later, it’s clear that it inspired many knockoffs from new and old brands alike. It’s maybe unfair to credit exactly one mechanical keyboard as a catalyst, but the Q2’s excellence sure makes it feel like the leader of the pack.

The very best active noise-cancellation wireless earbuds were upgraded in every way on AirPods Pro 2. Noise cancellation blocks out even more external sound, there’s Find My support, a lanyard loop, and longer battery life for the buds. It took three years for Apple to ship second-gen AirPods Pro, but they were worth the wait.

Unless you’ve been living in a cave, you’d know handhelds had a really big year, mostly thanks to Valve’s Steam Deck. The Linux-based handheld succeeded where so many have failed: It makes PC games playable on a “portable” without breaking the bank. Nintendo may have opened the door with the Switch, but the Steam Deck and the many PC handheld clones that have been released are taking things to the next level.

It’s electric; it’s reasonably affordable; it’s very boxy. Hyundai’s Ioniq 5 is one of 2022’s most iconic EVs, not just because of its look, but because it offers a hard-to-find mix of style and range (about 305 miles on a single charge) at a price point that proves EVs are impossible to ignore.

Technology is reshaping the world faster and more frenetically than ever. Our Swiss Army Knife smartphones, now nearing their final slab form factors, got more polished. Handheld gaming, largely fueled by the Steam Deck, waltzed into the spotlight. And EVs — be they electric cars or personal mobility like e-bikes and e-scooters — are really…

Technology is reshaping the world faster and more frenetically than ever. Our Swiss Army Knife smartphones, now nearing their final slab form factors, got more polished. Handheld gaming, largely fueled by the Steam Deck, waltzed into the spotlight. And EVs — be they electric cars or personal mobility like e-bikes and e-scooters — are really…