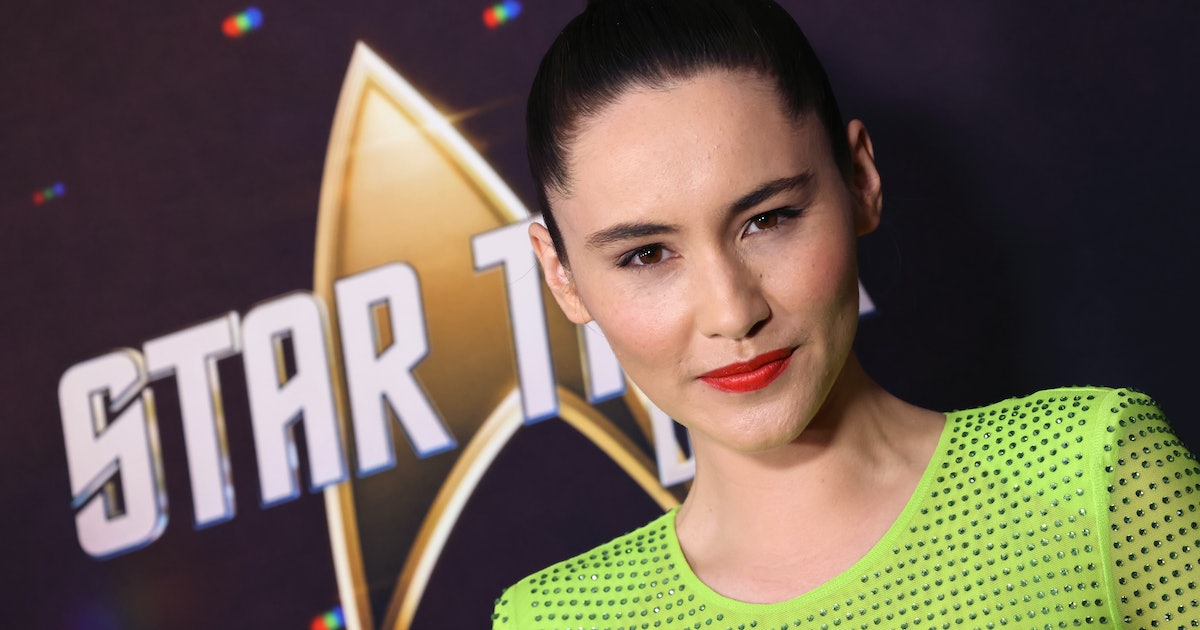 In the very first episode of Strange New Worlds, the new security chief of the U.S.S. Enterprise also has to fill in as acting first officer. Enter Lt. La’an Noonien-Singh, played by Christina Chong.

In terms of Star Trek lore, La’an is an interesting vector of various tricky canon questions. Strange New Worlds takes place before The Original Series, and yet, La’an is the one character who has previous knowledge of two classic adversaries: the Gorn and Khan. As a survivor of a Gorn attack as a child, La’an’s intel on carnivorous lizard aliens predates Capt. Kirk’s old-school Gorn smackdown in TOS. And because her ancestor is the infamous Khan Noonien Singh, she also knows all about genetic engineering and the tyrants of Earth’s past.

Speaking to Inverse in May 2022, Strange New Worlds writer Davy Perez referred to La’an as an “Easter egg basket,” insofar as she “is an outsider and new character, and she also gets to be an audience surrogate.”

Strange New Worlds instantly clicked with audiences worldwide, resulting in the most critically acclaimed new Star Trek in more than a decade. And, episode by episode, Christina Chong’s performance as La’an created a through line for the entire series. From her Gorn trauma in “Memento Mori” and “All Those Who Wander,” to her hilarious round of Enterprise Bingo in “Spock Amok,” to her memorable turn as an over-the-top fairy-tale princess in “The Elysium Kingdom,” Chong boldly went where no debut Trek actor has gone before.

Speaking to Inverse as part of our Scene Stealers end-of-year series, Chong reveals her surprise at the importance of La’an’s role, her warm feelings about her fan-favorite appearance on Doctor Who, and what’s in store for Strange New Worlds Season 2 and beyond.

Do you think La’an is an audience surrogate for people who’ve never seen Star Trek?

Yeah, I guess so. Because she’s completely new. She’s new to the ship and new to the team as well. You learn the whole backstory of the Gorn through her. And her last name is literally Khan’s last name. The writers are so clever in how they merged both canon characters and the original characters with new characters. I guess the only word for it is “retro.” It’s modern, but it’s old school.

From the point when you auditioned to when you got actually the scripts, were you surprised by how huge your role was?

Yes, 100 percent. I took this role thinking, “Oh, I’ll be in one or two episodes” or “I probably won’t be in every episode.” I thought I’d have loads of downtime. And then suddenly, I was like, “Whoa, OK, I’m in this whole freaking thing!” And not only that, but the story of the enemy in Season 1 is based around my character. It was incredible and I was so grateful. Obviously, in 2020, I hadn’t worked at all. So to go into 2021 with this character and with the Star Trek franchise was such a blessing.

Strange New Worlds is episodic, but La’an goes on a huge emotional journey in Season 1.

It’s all about what she’s been through and her trauma. She has a hard time trusting people. She knows that if you love somebody, they die at some point. So why would I trust and meet these new people, my family on the Enterprise, because, at some point, the Gorn are still out there! She’s thinking, “Something terrible is going to happen; I’m going to lose them.”

It’s a journey of her trusting. And trust is earned. You don’t trust willy-nilly. It’s a process.

Your first big TV role was in Doctor Who in 2011 as Lorna Bucket. How do you feel about that now?

It’s interesting, I just did a convention at the Wales Comic Con, and there’s been this kind of resurgence of Lorna Bucket. It’s been on Twitter as well. Suddenly everyone realized that was me. But at the Wales convention, you know, you have photos out on your table, and there was some Star Trek and some Halo. But the Doctor Who photos were really going. And I thought, well, maybe it’s because not everyone has quite seen me in Star Trek yet. But I was so fascinated that after over 10 years, people still remember that.

“She was the companion who never was!”

I think it’s because she gave River Song her name. It’s a very poignant mark in their journey for that generation of Doctor Who. I also had a death scene — and the fact that she could have been the companion. She was the companion who never was!

You’re so hilarious in the Strange New Worlds episode “The Elysium Kingdom.” How much of this other version of La’an did you create? I mean, it’s basically a totally different character, this fairy-tale princess…

I talked to the director, Amanda Row, before we started filming. I told her I used to do children’s entertainment. I would do parties. And do pantomime, which is very over the top. I told her I was thinking that kind of level, and she said, “100 percent, do that.” It was on the page, she was a princess, but on the day, we were all creating new characters. Which is why I decided to bring the singing element into it.

Everyone was going to play opposite of their characters, and I was like, “Right, in Episode 2 [‘Children of the Comet’] she says she can’t sing.” I didn’t tell anybody I was going to do it. On the day, I just held this massive note and started singing this song. There were a couple of times when I did actually laugh out loud with Babs [Olusanmokun] and everyone else. It was hard to keep a straight face. I just went totally out there. I thought, “You know what, I’ll give a give 120 percent, and they can pull it back if they want.” But they didn’t pull me back.

I feel like this is a hallmark of older Star Trek shows getting to do more than one genre in a season. Will that tradition continue in Season 2? Will we see even more genres?

Definitely. I’ve got goose pimples now thinking about Season 2. The showrunners have a lot of fun with it. They’re always thinking “How can we take this to the next level? What’s Star Trek never done before?” I’m really looking forward to those episodes in Season 2. Obviously, after Episode 8 in Season 1, that’s our barometer.

In Episode 9, La’an leaves the Enterprise on a personal mission. In Episode 10, we see her in an alternate future, serving with Capt. Kirk (Paul Wesley). Without spoilers, can you give any clue as to how her journey in Season 2 is different than Season 1?

This isn’t giving anything away, but I think she is continuing on that same kind of trajectory of growth. In Season 1, we saw her come to the point she’s at in Episode 9. She’s focused on helping that little girl, Oriana, find her family. If she can do that, she can have closure. Season 2 is a continuation of her journey. How far can she open up? How much is she willing to risk emotionally?

How long could you play La’an?

It depends on a few things, for me personally as an actor, but also for the franchise as well. We want to keep evolving her. As long as we can find ways to keep growing and evolving, like life. So hopefully, definitely, a few more years. But we’ll see what happens after that.

Marvel's Fantastic Four movie could beat 'Spider-Man: No Way Home' at its own game