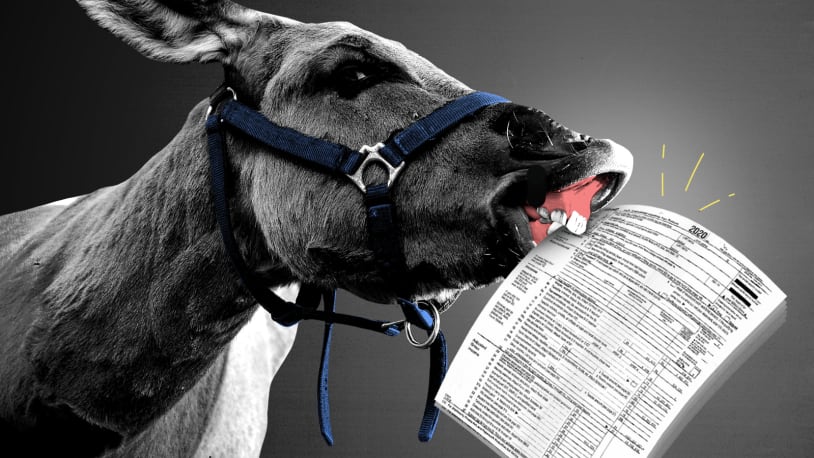 The Democrat-led House Ways and Means Committee voted this week to release several years of former President Donald Trump’s tax returns. Republicans called the move a partisan cheap shot that violated Washington norms, and would only result in retaliation against President Biden and other Democrats. But Democrats on the committee said releasing the records served the public interest. “This was never about being punitive. It was never about being malicious,” said Rep. Richard Neal (D-Mass.), the committee’s chair.

The documents indicated that Trump paid $1.1 million in federal income taxes in his first three years as president, but none in 2020 as his losses mounted, according to tax data the committee released. The congressional Joint Committee on Taxation reported that the documents contained a lot of red flags that should have triggered an audit, including dubious private jet expenses, unsubstantiated charitable deductions, and evidence of sketchy “loans” to Trump’s eldest children — Donald Jr., Ivanka, and Eric Trump — that looked like “disguised gifts” to evade gift taxes. Is releasing Trump’s taxes necessary for accountability, or an unwarranted swipe at a political enemy?

America needs to see that Trump is a ‘terrible businessman’

It’s hard to understand why some Republicans are whining about the releasing of Trump’s tax returns, says Amanda Marcotte at Salon. “Republican leaders should fall on their hands and knees and thank House Democrats for finally” making these documents public. The tax records, from 2015 to 2020, obviously “reveal that Trump is a massive tax cheat,” but that only makes his base “love him more.” The important takeaway is that these returns “show that President Drink Bleach is about as good at business as he is at medical science.”

Trump brags about being a “billionaire,” but his taxes show he “spent most of his presidency losing money hand over fist.” Anyone paying attention to him already knew this. “Over his lifetime, Trump was handed nearly a billion dollars by benefactors, first his father, then Apprentice producer Mark Burnett,” and turned right around and “flushed it all down the toilet,” losing more than $1.2 billion over the years. Even with the Saudi government “routinely” buying out blocks of rooms at his hotels, Trump lost millions in four of the six years covered in these returns. He only made big gains in 2018, and that was “because he sold off a bunch of property that he inherited from his father.”

It’s hardly shocking that a billionaire managed to avoid taxes

Trump should have made his returns public himself when he was running for president, says Nicholas Goldberg in the Los Angeles Times. Refusing to do so was “deceptive, sleazy, and in violation of a long-standing tradition that fosters transparency and honesty. He obviously hoped to hide unfavorable information from the voters.” But it’s a mistake for the House Ways and Means Committee to release them now.

The whole point of fighting Trump for years to get his tax documents was so the committee could evaluate the Internal Revenue Service’s presidential audit program. “Why make the returns public?” How does that help Congress judge whether the IRS auditing process works? “Answer: It doesn’t.” The only thing the public has learned from snippets from Trump’s documents leaked earlier to The New York Times was that he, like other billionaires, uses accounting tricks to pay “less in federal taxes in some years than you and I do!” That’s hardly news. It’s certainly no reason to start the “tit-for-tat posting of other people’s private tax returns” that is likely to follow.

Trump has a right to keep his taxes private

“The vote wasn’t an attempt to uphold the law or demonstrate illegality,” says the St. Louis Post-Dispatch in an editorial, “but rather to satisfy the curiosity of millions of Americans who just want to view a billionaire ex-president’s tax returns.” The committee’s chair said this wasn’t “malicious,” but he and his Democratic colleagues “appeared to struggle for a legal justification” when asked why this unprecedented decision was necessary.” That’s likely because there’s nothing in federal law that requires presidents, sitting or former, to make their returns public.

Trump needlessly offered the “bogus excuse” that he couldn’t release his returns because they were being audited. The truth is he was never under any obligation to show the public anything. Yes, “all major-party candidates since the Nixon administration” have released the president’s returns “as a way of demonstrating they have nothing to hide,” but it was always “strictly voluntary.” Trump chose not to hand his over and he was absolutely within his rights. “Any implication that he had something to hide was a political risk he was willing to take.”

This is all about embarrassing Trump

It was fair to criticize Trump for refusing to release his returns during the 2016 campaign, says The Wall Street Journal in an editorial. But “the voters elected him anyway.” The left should have dropped it then. Democrats “kept clamoring,” and “landed on the obscure IRS presidential audit program” to finally get what they wanted.

But “even if Democrats are correct that the audit program needs change, that’s no reason to expose Mr. Trump’s confidential taxpayer information.” The report already lays out Democrats’ evidence and recommendations,” so even the “flimsy” reasoning for giving Trump’s private information to the House Ways and Means Committee has been satisfied. “The sole point of dumping Mr. Trump’s returns is to embarrass him.”

The Democrat-led House Ways and Means Committee voted this week to release several years of former President Donald Trump’s tax returns. Republicans called the move a partisan cheap shot that violated Washington norms, and would only result in retaliation against President Biden and other Democrats. But Democrats on the committee said releasing the records served…

The Democrat-led House Ways and Means Committee voted this week to release several years of former President Donald Trump’s tax returns. Republicans called the move a partisan cheap shot that violated Washington norms, and would only result in retaliation against President Biden and other Democrats. But Democrats on the committee said releasing the records served…

Did the Jan. 6 committee prove Trump must face charges?

Puerto Rico’s status: Should it become a state?