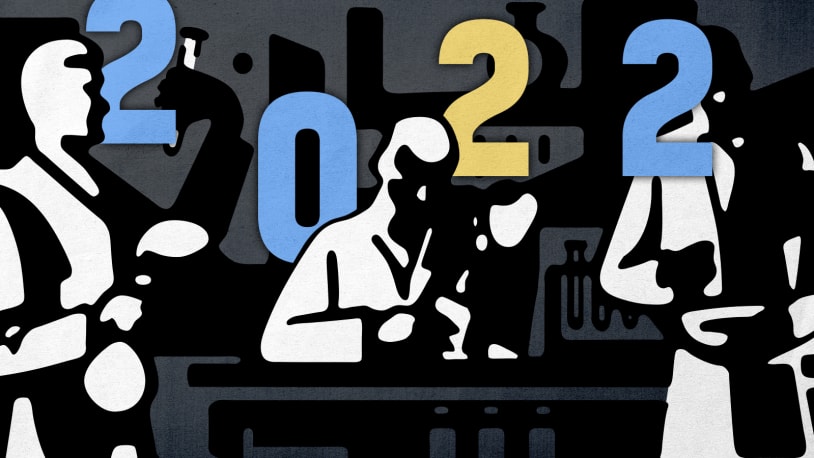 The 10 biggest scientific breakthroughs of 2022

Scientists in many fields got little attention over the last two years as the world focused on the emergency push to develop vaccines and treatments for COVID-19. But labs and researchers remained busy, and this year they’ve reported a dizzying series of major discoveries and achievements. Here’s a look at 10 of the most stunning scientific breakthroughs of 2022:

Scientists at the Lawrence Livermore National Laboratory in California announced in December that they had produced the first fusion reaction that created more energy than was used to start it. The long-elusive achievement marked a major breakthrough in harnessing the process that fuels the sun. “This milestone moves us one significant step closer” to “powering our society” with zero-carbon fusion energy, Energy Secretary Jennifer Granholm said.

Fusion involves pushing together two nuclei of a lightweight element, such as hydrogen, at a colossal speed, forcing them to fuse. The leftover mass is converted into an enormous amount of energy, according to Einstein’s formula E = mc2. Unlike fission, in which atoms are split, fusion requires small amounts of ordinary fuel — the amount of hydrogen in a glass of water could provide enough energy for one person’s lifetime — and does not create much radioactive waste, which is why it’s been called “the holy grail for the future of nuclear power.”

Popular Science magazine this year named NASA’s James Webb Space Telescope the Innovation of the Year in aerospace technology. Unlike the Hubble space telescope, which scanned the heavens from low Earth orbit, the Webb telescope is camped hundreds of thousands of miles farther out, sitting in Earth’s shadow, where it is permanently blocked from sunlight. Its view further protected by a multi-layer sunshield, it sits at the temperature (-370 degrees Fahrenheit) best suited for its infrared sight.

As a result, Popular Science says, the $10 billion JWST “can see deep into fields of forming stars. It can peer 13 billion years back in time at ancient galaxies, still in their nursery. It can peek at exoplanets, seeing them directly where astronomers would have once had to reconstruct meager traces of their existence. It can teach us about how those stars and galaxies came together from primordial matter, something Hubble could only glimpse.”

A group of Yale scientists reported in the journal Nature this summer that they succeeded in reviving cells in the hearts, liver, kidneys, and brains of pigs that had been lying dead in a lab for an hour. The researchers accomplished the feat by using a device much like a heart-lung machine to pump a custom-made solution, dubbed OrganEx, into the pigs’ bodies. The pigs’ hearts started beating and sent the solution through their veins.

The pigs weren’t revived, but their organs started functioning again, and they “never got stiff like a typical dead pig,” The New York Times reported. The researchers, according to the Times, hope their breakthrough eventually will help increase the supply of human organs available for transplant by letting doctors get viable organs from bodies long after death. The technology also might be useful in limiting damage to hearts from heart attacks, and to brains from strokes.

The researchers say their goals are to one day increase the supply of human organs for transplant by allowing doctors to obtain viable organs long after death. And, they say, they hope their technology might also be used to prevent severe damage to hearts after a devastating heart attack or brains after a major stroke.

U.S. public health officials have long warned Americans to brace for another possible COVID-19 surge as winter hits and families gather for the holidays. Indeed, the nation is facing a “tripledemic,” with COVID-19 cases rising, respiratory syncytial virus (RSV) overloading many hospitals, and the 2022-23 flu season building into what could be the worst in a decade. As of early December, the Centers for Disease Control and Prevention had already recorded 4,500 flu deaths.

Fighting the flu represents a new challenge every year because influenza viruses are constantly evolving. Some years, the vaccines are effective. Sometimes they miss the mark. But now Scott Hensley at the University of Pennsylvania and his colleagues have created a flu vaccine based on mRNA molecules — the same technique Moderna, and Pfizer, along with its partner BioNTech, used to make their widely used COVID-19 vaccines. The vaccine has produced antibody responses against all 20 known strains of influenza A and B in tests on mice, with the effectiveness lasting four months. The results were similar in tests on ferrets, fueling hopes the universal vaccine could work in humans, too.

If you’ve watched Armageddon or Deep Impact or some other movie about an asteroid threatening to wipe out life on Earth, relax. NASA this year proved with its Double Asteroid Redirection Test (DART) mission that it has the ability to deflect a giant space rock off a collision course with our planet. NASA sent the 1,100-pound DART spacecraft slamming into a 525-foot-diameter asteroid, Dimorphos, at 14,000 miles per hour to see whether the impact force would be enough to change its trajectory.

Dimorphos, which didn’t actually threaten Earth, was orbiting around a larger parent asteroid, Didymos, every 11 hours and 55 minutes before the crash. After DART slammed into Dimorphos on Sept. 26, astronomers clocked its orbit time at 11 hours and 23 minutes, 32 minutes shorter than before, signaling a significant change in its path. “All of us have a responsibility to protect our home planet. After all, it’s the only one we have,” said NASA Administrator Bill Nelson. “This mission shows that NASA is trying to be ready for whatever the universe throws at us.”

Artificial intelligence is opening up new possibilities for businesses and households, and now new text-to-image generators are giving everyone from artists to urban planners to reconstructive surgeons a new tool to help them visualize ideas. DALL-E 2, which Open AI released in July, looks at hundreds of millions of captioned images to turn text prompts written by users into images.

Mark Chen, the lead researcher on DALL-E 2, told The Atlantic that image generators like DALL-E 2 aim to “democratize” art. “This is the most exciting new technology in the AI space since natural-language translation,” Atlantic deputy editor Ross Anderson said.

Malaria, found in more than 90 countries, kills an estimated 627,000 people every year. Vaccines could help reduce or eliminate the toll, but scientists have struggled to develop a highly effective one. This year, though, the technology used to create mRNA vaccines against COVID-19 has helped a research team led by George Washington University develop two experimental mRNA vaccine candidates that are highly effective in reducing malaria infection and transmission, according to a study published in December in npj Vaccines, an open-access scientific journal in the Nature Portfolio.

“Malaria elimination will not happen overnight but such vaccines could potentially banish malaria from many parts of the world,” says Nirbhay Kumar, a professor of global health at the George Washington University Milken Institute School of Public Health.

Scientists reported progress on several fronts in the battle against cancer. A team led by Chris Jones, a professor of Pediatric Brain Tumor Biology at the Institute of Cancer Research, worked with the company BenevolentAI to use artificial intelligence tools to come up with a new drug combination to fight diffuse intrinsic pontine glioma, an incurable childhood brain cancer. The proposed combination extended survival in mice by as much as 14 percent and has been tested in a small group of children.

In another potential breakthrough, Dr. Luis A. Diaz Jr. of Memorial Sloan Kettering Cancer Center wrote a paper published in June in the New England Journal of Medicine describing a treatment that resulted in complete remission in all 18 rectal cancer patients who took the drug. “I believe this is the first time this has happened in the history of cancer,” Dr. Diaz said.

Scientists from Stanford University successfully injected human nerve cells into the brains of newborn lab rats and found that they formed connections with the animals’ own brain cells, guiding their behavior, according to a study published in the journal Nature. The human cells wound up making up one-sixth of the rats’ brains. The cluster, known as a brain organoid, then develops in ways similar to a human brain, which could help researchers understand more about schizophrenia, autism spectrum disorder, bipolar disorder, and other neuropsychiatric disorders. “It’s definitely a step forward,” says Paola Arlotta, a prominent Harvard University brain organoid researcher who wasn’t involved in the study.

Some bioethicists are uneasy about the implications of putting human cells into rats. “It raises the possibility that you’re creating an enhanced rat that might have cognitive capacities greater than an ordinary rat,” said Julian Savulescu, a bioethicist at the National University of Singapore. But Dr. Sergiu Pasca, a professor of psychiatry and behavioral sciences at Stanford who developed the transplant technique, says the human brain organoids, made from stem cells, stop developing after a few months. “No matter how long we keep them in a dish, they still do not become as complex as human neurons would be in an actual human brain,” Pasca says.

10. Creating life without sperm or eggs

In experiments at the Weizmann Institute of Science in Israel, researchers created mouse embryos inside a bioreactor that were made up of stem cells cultured in a Petri dish — no egg, no sperm. The embryos developed normally, starting to elongate on day three and developing a beating heart by day eight. It was the first time scientists ever managed to grow fully synthetic mouse embryos outside the womb.

The experiment marked a leap in the study of how stem cells form various organs, and how mutations result in developmental diseases. “It also raises profound questions about whether other animals, including humans, might one day be cultured from stem cells in a lab,” according to STAT News. “As soon as the science starts to move into a place where it’s feasible to go from a stem cell population in a Petri dish all the way through to organ development — which suggests one day it will be possible to go all the way to creating a living organism — it’s a pretty wild and remarkable time,” said Paul Tesar, a developmental biologist at Case Western Reserve University School of Medicine who wasn’t involved in the study.

December 22, 2022 December 22, 2022 Scientists in many fields got little attention over the last two years as the world focused on the emergency push to develop vaccines and treatments for COVID-19. But labs and researchers remained busy, and this year they’ve reported a dizzying series of major discoveries and achievements. Here’s a look…

December 22, 2022 December 22, 2022 Scientists in many fields got little attention over the last two years as the world focused on the emergency push to develop vaccines and treatments for COVID-19. But labs and researchers remained busy, and this year they’ve reported a dizzying series of major discoveries and achievements. Here’s a look…

A “super-resistant” gene mutation in mosquitoes may increase the risk of dengue, a study finds