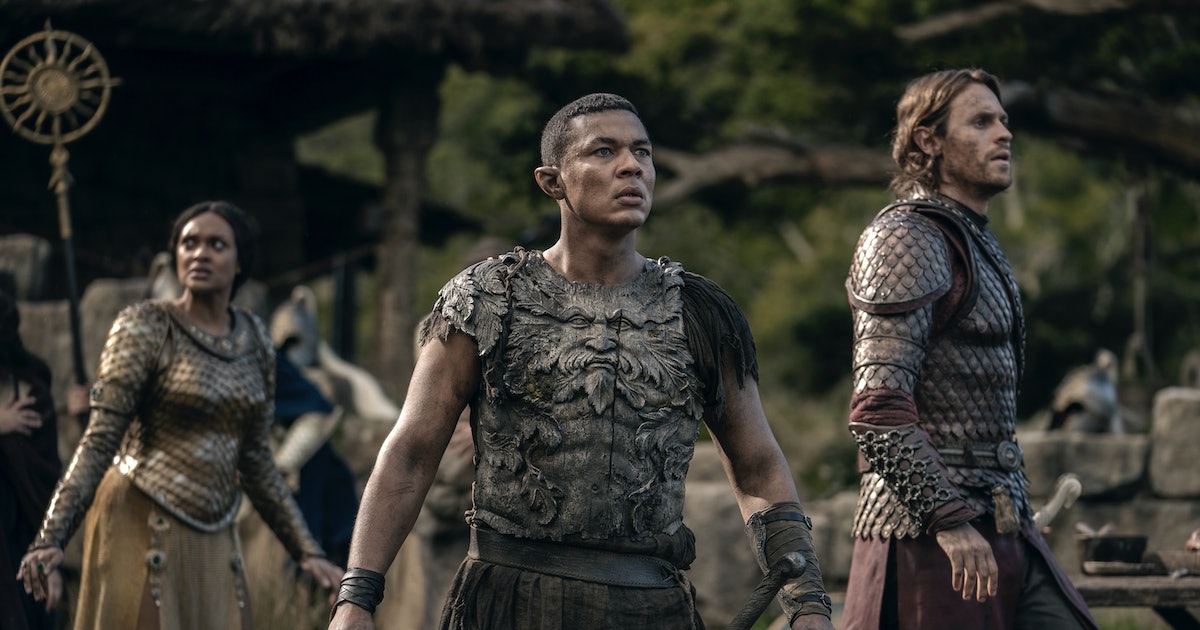 As an army of orcs and treacherous humans storm the ancient watchtower, a single shadowy figure surveys the scene. His name is Arondir, and he’s about to go medieval on everyone’s *ss.

Played by Ismael Cruz Córdova, Arondir is a Woodland Elf and an original character created for Amazon Prime’s The Lord of the Rings: The Rings of Power. Capable of superhuman feats — thanks to an IRL training regimen that included everything from archery to capoeira — he’s one of the most formidable fighters in a TV show full of them.

So when I ask if Arondir could hold his own in a fight with Galadriel (Morfydd Clark’s indomitable Elf in Rings of Power and one of J.R.R. Tolkien’s favorite characters), he doesn’t hesitate.

“I want to challenge Galadriel,” Córdova tells Inverse. “If I don’t support the guy, who’s going to?”

While Córdova still can’t confirm whether his character will appear in Rings of Power Season 2, it seems inevitable we haven’t seen the last of Arondir — though a showdown between the two heroic Elves also seems like a stretch unless one of them is about to break bad.

Speaking to Inverse as part of our Scene Stealers series, Córdova reveals the epic story of how he got the role (he was rejected three times), his surprising favorite Lord of the Rings character, and the deleted Rings of Power scene he hopes to see in the extended cut.

How did you get the role of Arondir?

Well, it’s tough to summarize because it’s a seven-month-long story. I started auditions in New York City, and I was extremely interested in doing it. I’m a Lord of the Rings fan. I was auditioning for an Aragorn-type character. That’s what the breakdown was at the beginning. This was pre-Covid.

Then I go to L.A. I have to start doing self-tape auditions. So I do another callback. Then another callback. This is already like two months. After three months, I get this movie in South Africa. And on my way, I get my first rejection. And I’m like no way. I keep going for it.

I’m shooting the movie in the desert of South Africa, and I get put back in the audition process after a lot of fighting. I get another opportunity. So the crew there helps me put it together. I’m staying in this tent in the desert. We do the whole thing: makeup, costume. We start uploading, but there was very little Wi-Fi, and the upload failed after 10 hours. So they have to drive to another town, upload it, and send it. And I got my next rejection.

“I did my screen test, did my improv, dropped my Elven mic, and left.”

After that, I keep fighting for it. They send an email saying it’s not going to happen. So it’s essentially my third rejection. I was like, “I’m going to show up a day when you’re in Barcelona. I’m gonna be that kind of fighter.” My team was like, “Don’t do that, don’t be creepy.” So I come back to the States. I kind of grieve the process. By this point, it’s been like six months. And after I released it, I get a call from my manager, and she was like, “Hey, they want to see you in New Zealand. After all this fighting, they actually want to take you back.”

So I went to New Zealand. I got added to the screen test list. I felt like the underdog, the dark horse. The night before, that’s when they told me that they’ve kept it secret but it’s actually an Elf that I’m auditioning for. That hit because I really wanted to be an Elf. I felt very connected to that.

My physicality changed. I went to a park to rehearse the scene in the trenches where I’m about to cut that tree. And that’s when I did an improv where I asked for forgiveness from the tree before cutting it. That made it into the show later. I went to the screen tests. I met [director] J.A. [Bayona]. I met the showrunners. I did my screen test, did my improv, dropped my Elven mic, and left. I wrote a letter to J.A. doubling down that I felt very committed to this character. And maybe another three weeks later I got the call that I was the guy.

Wow, that’s a pretty incredible story. You mentioned you’re a Lord of the Rings fan. Who’s your favorite character?

It’s very hard to pick, extremely hard to pick. From the human characters, I love me some Aragorn, and I love me some Gandalf. But the character that I love as an actor, whose physicality really gets me, is Gollum. Andy Serkis. All that work. The duality and the conflict and essentially having to play two characters. It was all his movement. And you feel the emotion through the animation.

Your character in The Rings of Power is basically a superhero. The action is incredible. What kind of training did you do for your fight scenes?

Well, I came with a little base in combat. I trained in boxing for a while. But I fully had to learn a bunch of stuff. I had to learn archery. I did a bunch of swordwork. I wanted it to be a language, a true language. He’s a Silvan Elf. There are no other Silvan Elfs. So I had the opportunity to introduce something new. I trained in tae kwon do, kung fu, Wushu, and some tai chi. And I put in capoeira as he is a Wood Elf, so he’s closer to the ground. I was thinking about the movement of the trees, his relationship with the forest, going under roots, over roots, and through trees. What animals does he think about? I just went full in. He speaks through movement. So I obsessed over it till the last detail.

“What animals does he think about?”

I learned staff work. I did all of my wires, all of the jumps, all of the flips, and all of the big jumps from the roof. All of the fighting, essentially. In Episode 6, the one thing that I don’t do is just rolling down the roof. The rest is yours truly for the entire show.

Who do you think would win in a fight: your character or Galadriel?

I’m going to go with me, 100 percent. If I don’t support the guy, who’s going to? I believe in the guy. If anything, I just think he has the best of both worlds: the Elven elven skill and the Elvenness, but he’s also a little street as well. He’s street-smart. He’s spent some good time with the humans. At the end of the day, he’ll throw a rock, you know, whatever’s around. So I want to challenge Galadriel.

One of my favorite scenes was you fighting all those orcs in the watchtower. How did that come together, and how much of it was practical effects versus CGI?

There were rocks that were coming down as a practical effect. I shoot that arrow, turn around, jump down, and then continue the movement of kicking the rock, and then continue to run. The whole time I’m just wearing a single wire, so I had to work around all of that.

What was your favorite scene in Rings of Power Season 1?

I have two. There’s the trench sequence in general. I think it’s fantastic. It was very emotional when I lose my friend, all the way until I have to chop that tree. There is so much loss to contend with that I had to also just funnel through a structure of Elvenness. I can’t just suddenly start emoting as a human because he doesn’t feel loss in that way. It was a very big challenge. It was very emotional. The whole sequence is one of my favorites, all the way to when Watchwarden Revion gets killed.

The other is when Bronwyn is about to die. That scene was a little longer in the beginning. I do this Elven prayer over her body. So that scene, as it was, was one of my favorite scenes. It’s still beautiful, but maybe in the extended cut.

As an army of orcs and treacherous humans storm the ancient watchtower, a single shadowy figure surveys the scene. His name is Arondir, and he’s about to go medieval on everyone’s *ss. Played by Ismael Cruz Córdova, Arondir is a Woodland Elf and an original character created for Amazon Prime’s The Lord of the Rings:…

As an army of orcs and treacherous humans storm the ancient watchtower, a single shadowy figure surveys the scene. His name is Arondir, and he’s about to go medieval on everyone’s *ss. Played by Ismael Cruz Córdova, Arondir is a Woodland Elf and an original character created for Amazon Prime’s The Lord of the Rings:…

The Way of Water’ takes the wrong lessons from ‘Star Trek’