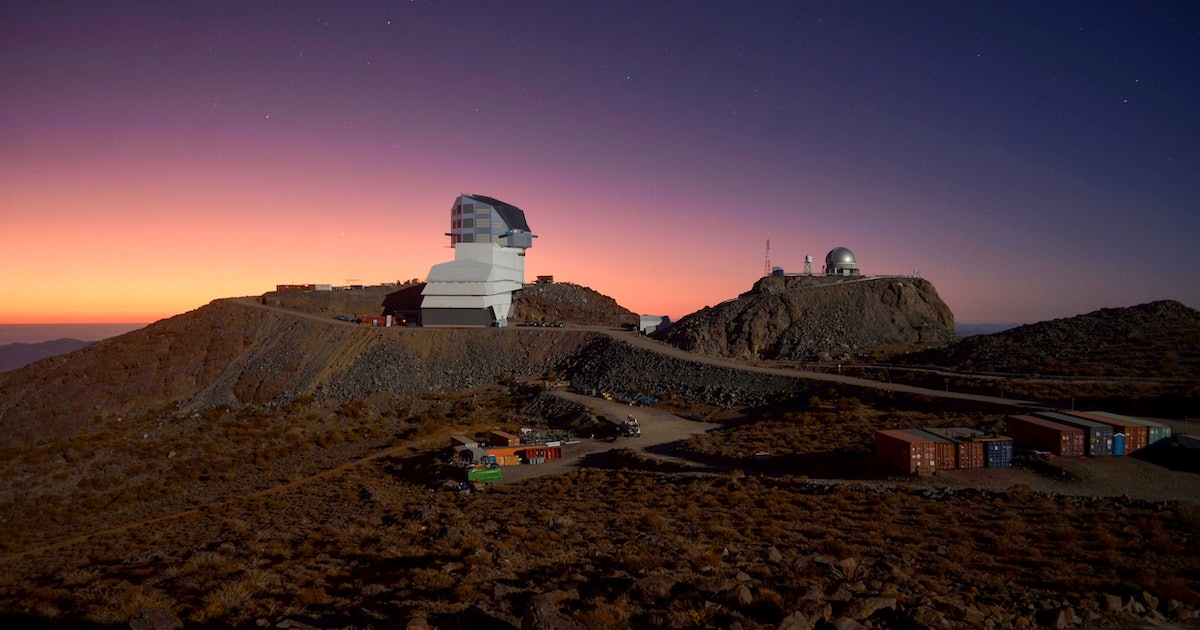 Is Planet Nine out there? This new telescope could finally settle the long-standing mystery

The camera resting in an impeccably clean, lint-free room at the SLAC National Accelerator Laboratory in Menlo Park, California, resembles an extremely oversized version of the SLR lenses for Nikon or Canon cameras. But it won’t snap family holiday cards or pet portraits.

This massive device has a five-and-a-half foot aperture and a length of nearly 10 feet. Called the LSST Camera, which stands for the Legacy Survey of Space and Time, it’s destined for the National Science Foundation’s Vera Rubin Observatory, which is now under construction atop Chile’s Cerro Pachón mountain.

By the end of 2024, the observatory is scheduled to kick off a 10-year project that aims to enhance our understanding of the universe.

Unlike the stunning vistas captured by the James Webb Space Telescope in space or the Subaru Telescope on the ground, the Vera Rubin Observatory won’t stare at just one small patch of sky at a time. As a survey telescope, it’s intended to take nightly wide-angle images of the sky, tracking each mote of light possible from its patch of deep-dark sky in the Atacama Desert.

There, the telescope will take in unprecedented amounts of data, mapping the entire southern portion of the night sky. It may offer insight into both dark energy, which makes the universe expand, and dark matter, an elusive type of matter that makes up just over a quarter of the total mass (27 percent) of the universe. (The observatory’s namesake is credited with dark matter’s discovery.)

The telescope could also tell us more about our own home galaxy, the Milky Way, including the structure and the positions of stars — some perhaps too dim to appear in past surveys.

That’s a lot of work on the observatory’s plate. And it has another big task to perform much closer to home, in our own Solar System.

When I toured the SLAC facilities this past September, Aaron Roodman, deputy director of the Vera Rubin Observatory, suggested that astronomers could discover “something like 50 times more than the number of objects that have been observed in our Solar System.”

Some are going to be small — nearby, building-sized asteroids — but others will be distant comets and pluto-like dwarf planets. Overall, it could glimpse six million objects just in our cosmic backyard.

Some of those mysterious objects could even earn recognition as new, bona fide planets.

Why astronomers suspect there’s a Planet Nine out there

In 2003, a strange object called Sedna, which measures 300 miles in radius, was discovered in our Solar System. Sedna is big enough to be considered a dwarf planet and is one of the most distant known objects in the Solar System — it takes 11,400 years to complete one trip around the Sun. At its most distant point, Sedna can swing out an astonishing 937 times the distance between the Sun and Earth. That’s one of the most extreme known orbits of any Solar System body.

Scientists speculated as to what could have caused that unusual orbit, including the possibility that it was captured from another star system that was passing by. Then, in 2012, astronomers discovered 2012 VP113, another object with a Sedna-like orbit. They also found more objects, all clustering near the same area at their closest point to the Sun.

In 2015, some astronomers suggested that these orbits could be associated with a large, still-unidentified planet. A second group, Mike Brown and Konstantin Batygin at the California Institute of Technology (Caltech), theorized in 2016 that an object with a mass somewhere between Neptune and Earth was behind it. They proposed an orbit and a provisional name: Planet Nine.

Astronomers have yet to find Planet Nine, and some are even growing a bit discouraged — some claim that the clustering of the distant objects doesn’t even exist.

But the minds behind Planet Nine’s existence aren’t giving up. “We have been pretty careful about figuring out what the true predictions of the Planet Nine model is, and tracking them as the data set has grown,” Batygin tells Inverse.

At this point, Batygin says his team has found 24 to 25 objects that may be controlled by Planet Nine, compared to just six from the original paper.

Brown and Batygin have examined a series of potential locations for Planet Nine, given that it might sit opposite Sedna and the other objects it bullied into new orbits. But that work has been performed with telescopes with a limited view of a patch of sky.

“This process of searching for objects in the distant Solar System is not that complicated.”

And that’s why the introduction of the Vera Rubin Observatory becomes exciting. Because Vera Rubin takes a wider picture of the sky, it could yield a discovery of a new Solar System object in just a few nights.

“Fundamentally, this process of searching for objects in the distant Solar System is not that complicated,” Batygin says. “You take pictures of the sky one out one night after another, and you look for something that has moved.”

It takes around three nights to figure out if an object is local or far away, he says, and then a telescope can begin to detect motion and acceleration.

From there, a fleet of observatories could inspect the new object and figure out what it is. This means that if all goes right, Planet Nine could be found in a matter of nights. But it may take much longer. Ultimately, though, it could be data from the Vera Rubin Observatory that tips scientists off to the mysterious maybe-planet.

“[Vera Rubin Observatory] has a good chance, actually, because we have the combination of light-collecting area and field of view,” Roodman says. “So [even] if it’s a dim object, we should have a chance to see it.”

Still, there’s no guarantee that it’ll be immediately visible in the Southern Hemisphere. Indeed, by some projections, the Northern Hemisphere is the place to look. But if the Vera Rubin Observatory finds a ton of distant Solar System objects like Sedna clustered in the same kinds of orbits, it still points the way toward a planet.

That information can be used to make — or break — the Caltech team’s hypothesis.

“If there is no other model that can explain what we see in the night sky, then we’re sort of left with no option, no logical option other than to kind of say, well, ‘Planet Nine is probably there,’” Batygin says. “Conversely, if Vera Rubin searches the night sky, and shows that there is no clustering whatsoever, and all of this has somehow been a weird conspiracy of telescope observing strategies or whatever, then we’re just wrong.”

Other worlds to find

Kat Volk, a University of Arizona planetary scientist, counts herself among the researchers who have never quite bought the Planet Nine hypothesis.

Partly, Volk thinks the observations may be biased — scientists aren’t seeing all the outer Solar System objects that don’t align, and there are plenty that don’t really fit into the Planet Nine model.

“The evidence for Planet Nine is very weak,” Volk tells Inverse, adding that the observatory could find out if something else is afoot in the outer Solar System.

In 2017, Volk and a colleague proposed an entirely different ninth planet: a Mars-sized object that accounts for other orbital irregularities in the outer Solar System. But Volk says subsequent data weakened the case for this object.

“There are some large objects out there waiting to be found.”

The Vera Rubin Observatory could fill in a lot of gaps in our knowledge of the far outer Solar System. It may find out where some of the evidence for another planet is flimsy, and where such a scenario has a firmer footing.

“One of the best things about the Vera Rubin Observatory’s [survey] is that it will provide one very large, coherent dataset of detected solar system small bodies,” Volk says. So far, scientists haven’t gotten a clear sense of what objects exist beyond Pluto, and our rough picture was painted from different surveys that each had different limitations.

All in all, a ninth planet may be possible, according to Volk. While she thinks the case for either Planet Nine or even her own hypothetical planet is weak, formation theories about our Solar System suggest that a population of small planets could exist still in its outskirts.

Based on models of planet and planetesimal formation in the early Solar System, it seems likely that some decently large planets “were scattered out during the dynamical upheaval that led to our current planet configuration,” Volk says.

“I don’t think there is currently strong evidence for specific large objects in the [trans-Neptunian object] population,” she explains. “But I do think it’s likely there are some large objects out there waiting to be found.”

The camera resting in an impeccably clean, lint-free room at the SLAC National Accelerator Laboratory in Menlo Park, California, resembles an extremely oversized version of the SLR lenses for Nikon or Canon cameras. But it won’t snap family holiday cards or pet portraits. This massive device has a five-and-a-half foot aperture and a length of…

The camera resting in an impeccably clean, lint-free room at the SLAC National Accelerator Laboratory in Menlo Park, California, resembles an extremely oversized version of the SLR lenses for Nikon or Canon cameras. But it won’t snap family holiday cards or pet portraits. This massive device has a five-and-a-half foot aperture and a length of…

A “super-resistant” gene mutation in mosquitoes may increase the risk of dengue, a study finds