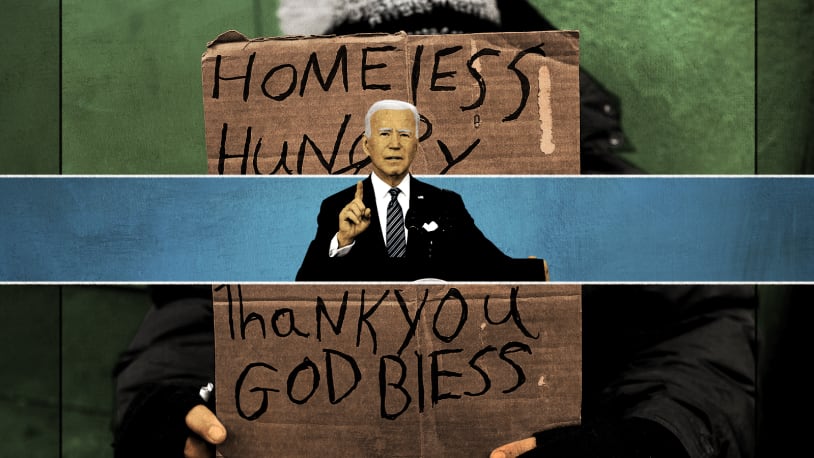 Everything to know about Biden’s homelessness agenda

President Biden has unveiled the latest item on his to-do list: a sweeping agenda aimed at reducing homelessness in the United States. But can the president’s lofty goals be met? Here’s everything you need to know:

What is President Biden’s new agenda for homelessness?

The agenda, titled “All In: The Federal Strategic Plan to Prevent Homelessness,” was unveiled by the Biden administration as the next iteration of the federal effort to stop homelessness. Produced by the United States Interagency Council on Homelessness (USICH) in conjunction with 19 federal agencies, this federal strategic plan sets the ultimate goal of reducing homelessness in the U.S. by 25 percent by 2025.

According to the USICH, “All In” was developed using a wide swath of data points and research, including input from more than 1,500 comments and dozens of listening sessions from people who have experienced homelessness.

In a statement, the White House called the plan “the most ambitious effort by any administration to prevent people from becoming homeless” while also addressing inequality in America. The statement noted that the plan will work to build on the foundation established by “Opening Doors,” the homelessness plan unveiled by the Obama-Biden administration in 2010.

“My plan offers a roadmap for not only getting people into housing but also ensuring that they have access to the support, services, and income that allow them to thrive,” Biden wrote in an introductory letter to the plan. “It is a plan that is grounded in the best evidence and aims to improve equity and strengthen collaboration at all levels.”

How will it reduce homelessness?

There are a number of prongs to the agenda, a large part of which builds on the president’s previously-signed American Rescue Plan. That roadmap, which was passed in 2021 as a stimulus package to help jump-start the economy after the COVID-19 pandemic, has already provided billions of dollars in rental assistance to help keep people off the streets. “All In” is aiming to increase this federal funding significantly in an effort to build more homeless shelters and affordable housing. The White House said more than 100,000 people will have already been removed from homelessness by the end of 2022.

“All In” is built around three foundational principles — equity, data, and collaboration — and three solution principles — housing and support, homelessness response, and prevention. Each of these pillars “includes strategies the federal government will pursue to facilitate increased availability of and access to housing, economic security, health care, and stability for all Americans.”

As Insider reports, the plan will also look to achieve a number of localized solutions to homelessness, including the mobilization of funds to create housing on state levels as well as federal levels. Further, it outlines a number of cross-country homelessness initiatives that will be supported by the White House.

The entire network of strategies will follow the “Housing First” model, the White House said. Per the National Alliance to End Homelessness (NAEH), this idea is a public housing approach that focuses on getting homeless people a permanent place to stay prior to addressing any other systemic problems, such as drug addiction or mental illness. The idea is guided by the principle that basic needs, such as food, clothing, and shelter, should override any other problems a homeless person may be having.

What is the current state of homelessness in the U.S., and will Biden’s plan work?

The statistics on homelessness have been derailed due to the pandemic, so 2020 is the last full year in which data was collected. That year, there were just over 580,000 people experiencing homelessness in the United States, the NAEH reported. While the majority — 70 percent — were living on their own, the rest were families, many of which had young children. This included people from every race, background, gender, and ethnicity.

In total, more than 1.25 million people experienced homelessness at some point in 2020, and the crisis has been only exacerbated by economic hardships and issues from the pandemic.

Overall homelessness data collected from 2010 to 2016 showed that the total number of people living on the street was steadily declining; however, that figure has been rising every year since, according to the NAEH. And The Washington Post reports that, in addition to overall rising numbers, there are now more unsheltered homeless people — people who actually live on the street — than those who reside in homeless shelters.

Again, the goal of “All In” is to reduce the level of homelessness in the U.S. by 25 percent. “Homelessness is largely the result of failed policies,” the plan says. “Severely underfunded programs and inequitable access to quality education, health care … and economic opportunity have led to an inadequate safety net.”

But will “All In” actually help solve the homelessness problem? Steve Berg, the chief policy officer at NAEH, told the Post that the agenda offers “an overall approach to the problem,” and sounded optimistic considering the administration had had previous success with eliminating targeted groups of homeless individuals. But of the 25 percent goal, Berg added, “I am completely convinced that it’s possible. Whether it will succeed — it’s sort of hard to tell.”

What else has the administration done about homelessness?

“All In” is not the first initiative introduced by Biden to try and eliminate homelessness. Beyond the issue’s inclusion in the American Rescue Plan, the White House introduced the Housing Supply Action Plan earlier in 2022. Similar to the other agendas, the Housing Supply Action Plan served to ease the widening housing supply gap and help make housing more affordable for low-income Americans.

The plan included specific rewards for jurisdictions that reformed their zoning and land use policies to create more affordable dwellings. It also earmarked additional federal funding for housing mechanisms and worked with the private sector to build new homes at a rapid pace. Months after it was introduced, the Biden administration provided an update on the Housing Action Supply Plan — the agenda had so far provided more than 19,000 housing vouchers to 2,000 public housing groups across the country.

In addition, the U.S. Department of Housing and Urban Development sets a yearly fair market rent, which is used to determine the value of some public housing vouchers. This figure is slated to be increased by 10 percent for the fiscal year 2023.

While homeless clearly remains an endemic problem in the United States, it seems the Biden administration is keen to place its eradication near the top of the White House’s agenda.

President Biden has unveiled the latest item on his to-do list: a sweeping agenda aimed at reducing homelessness in the United States. But can the president’s lofty goals be met? Here’s everything you need to know:  What is President Biden’s new agenda for homelessness? The agenda, titled “All In: The Federal Strategic Plan to Prevent…

President Biden has unveiled the latest item on his to-do list: a sweeping agenda aimed at reducing homelessness in the United States. But can the president’s lofty goals be met? Here’s everything you need to know:  What is President Biden’s new agenda for homelessness? The agenda, titled “All In: The Federal Strategic Plan to Prevent…

A history of presidential parodies on Saturday Night Live

How to curb your holiday waste