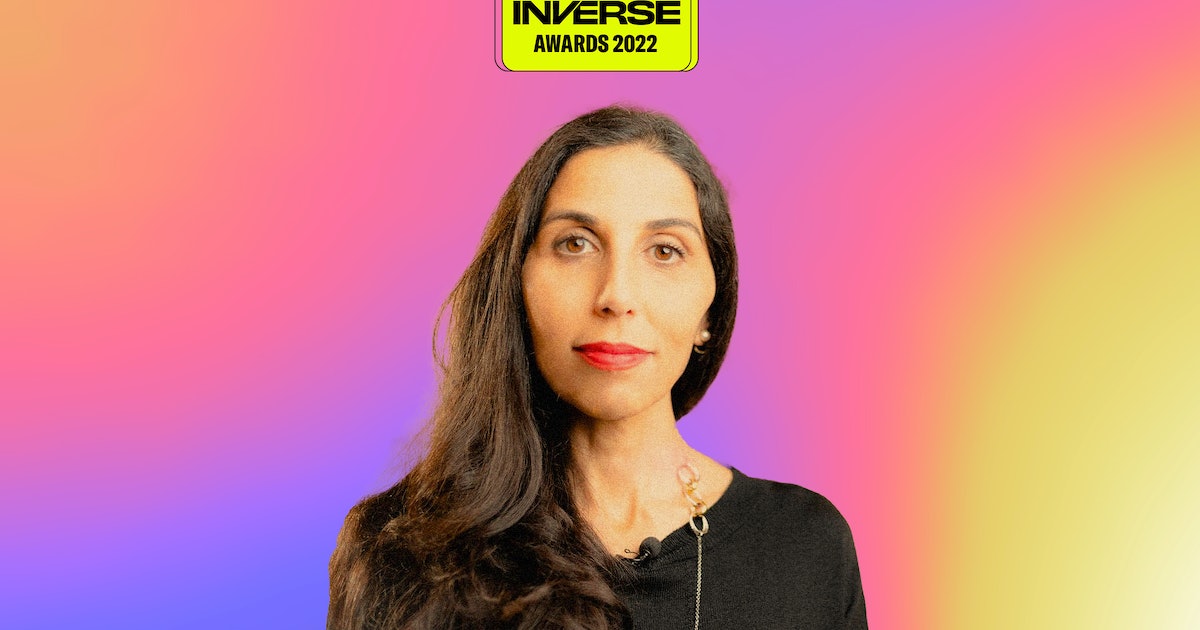 Growing up, Mariafelicia de Laurentis always wanted to find more than an occupation. She wanted a calling.

“I didn’t want an ordinary job. I wanted to leave a mark,” de Laurentis tells Inverse. “And maybe having the name imprinted on the page of a book that changed history: this is my concept of Earthly eternity.”

So she became a physicist.

Today, de Laurentis is a professor of astronomy and astrophysics at the University of Naples Federico II. She’s also a member of the Scientific Council of the Event Horizon Telescope (EHT) and deputy project scientist of the EHT collaboration that produced the first image of the supermassive black hole at the center of our galaxy, Sagittarius A* (Sgr A*), in May of 2022. She also helped the team obtain the first-ever direct image of a black hole, Messier 87*, in 2019.

“I have always wanted to ‘enter the mind of God,’” de Laurentis says. “There is no more intriguing way to do this than by studying the laws of physics that govern our universe.”

And studying black holes might be the most interesting way to uncover those laws, she adds. At the cusp of a black hole — what scientists call its event horizon — the laws of physics as we know them break down. The Event Horizon Telescope can study how they break down, providing an invaluable laboratory for studying the foundation of our universe and our current understanding of physics. This has become more than a career for de Laurentis — it’s the calling she’s always wanted, and a lifestyle all its own.

Early on, de Laurentis was attracted to the laws governing attraction, to gravitation. She based the thesis for her undergraduate degree in physics from the University of Naples Federico II on models of the gravitational waves emitted by compact binaries — that is, black holes or neutron stars orbiting each other very closely. Her Ph.D. at the Polytechnic of Turin in Italy focused on extended theories of gravity, a family of theories looking to extend Einstein’s General Relativity theory to better account for quantum phenomena, as well as dark matter and dark energy.

Following her studies, she worked with the Virgo Collaboration, a European project to detect gravitational waves or ripples in space-time itself.

“The more I studied, the more I noticed that I was intrigued by understanding how gravity works,” de Laurentis says. “In particular, I was attracted and fascinated by black holes, these beautiful objects that are the perfect laboratory for testing gravity.”

How do you take a picture of a black hole?

Black holes are the result of the cores of supermassive stars collapsing in on themselves. They are so dense their own gravity seems to rip a hole in space and time. Nothing, not even light, escapes the event horizon, that boundary around a black hole.

But matter destined to disappear down a black hole’s maw doesn’t just fall straight into it. It will orbit the event horizon in ever-tightening circles like water going down a drain. The matter gets compressed and superheated in what is called an accretion disk and releases all kinds of light, including X-rays and radio waves.

This is fortunate because it gave the EHT project something to look for — we can’t see a black hole itself. The collaboration’s scientists could attempt to image the accretion disk around black holes and hopefully see the blackness of the event horizon in the center, a sort of “shadow” of a black hole.

“For the first time, we [could] test Einstein’s [theory of general relativity] directly at the edge of the black hole at the ultimate frontier constituted by the event horizon, the region of no return,” de Laurentis says.

To do so, scientists needed a telescope big enough to be able to resolve black holes thousands to millions of light years away. But that kind of undertaking takes a massive telescope — bigger even than the Very Large Array in New Mexico. The EHT network instead builds a planet-sized virtual telescope, with 11 facilities spread across the western hemisphere (including Antarctica) acting in concert like one giant antenna. On a clear day — too many clouds can cause disruptive interference — the EHT network has better resolution than the James Webb Space Telescope.

De Laurentis was invited to join the EHT collaboration in 2015, joining a team in Frankfurt setting up BlackHoleCam, the European component of the international consortium that is the EHT collaboration. Since then, she has coordinated the EHT Gravitational Physics input Working Group, interpreting the results of the EHT observations and working in theory and simulations.

It was, in many ways, all-consuming, and de Laurentis was able to throw herself into the EHT project with the type of absorption she had always wanted.

“I forgot to eat, sleep, to do many things, but I never got tired of working and researching,” she says. “Research is not a simple job that ends when eight hours have passed: it’s a way of life, of thinking, it’s a passion so strong that you can’t see it simply as a job. It’s something more.”

Experiencing the first image of a black hole

All of that work went first into processing the observations of Messier 87*, a supermassive black hole at the heart of the Messier 87 galaxy, about 55 million light-years from Earth. Released to the public in April 2019, the first direct image of a black hole shows a central circle of blackness surrounded by an almost smile-like ring of bright orange matter — the superheated accretion disk.

The discovery drew comparisons to the Eye of Sauron of the Lord of the Rings and to de Laurentis, it had a magical, almost mystical import.

“The emotion I felt when we managed to make the invisible (the black hole) visible is comparable to the birth of a child, to a conception,” she says. “Ideas are part of us; they grow within us and materialize through the work of months and years of research.”

More observations and work followed, this time of Sgr A*, the supermassive black hole at the center of our own galaxy. The first Sgr A* image was released to the public in May, again showing a fiery accretion disk around a central black void, though this time, the accretion looked less like a smile than a ring of fire with three bulbous nodes.

At a comparatively close 25,000 light years away, Sgr A* is somewhat more easily studied than Messier 87*, according to de Laurentis.

What scientists learned from Sgr A*

But while the images of Messier 87* and Sgr A* are technical marvels, and honestly, just downright cool — they took pictures of black holes! — they are of immense scientific value to researchers like de Laurentis.

“There are countless reasons to be fascinated by these objects,” she says, “but the real reason why many physicists like me study them is that they challenge the laws of nature.”

That place where nature’s laws break down, the event horizon, is unique in all the cosmos, and the EHT observations give scientists a direct view of these seams in reality. And while there are mysteries, so far, black holes have largely confirmed the ideas of General Relatively.

“Our results from these new measurements of Sgr A* provide further evidence that astrophysical black holes, regardless of their mass, are described by solutions of Einstein’s theory,” de Laurentis says. And although Sgr A* is 1,500 times less massive than Messier 87*, “the event horizon, the region of no return, is so similar in both objects.”

Studying and comparing these black holes could help scientists working on extended theories of gravity marrying the quantum world with that of General Relativity, she says, and may also shed light on how galaxies form and evolve; supermassive black holes are believed to lie at the heart of most big galaxies.

What’s next for EHT and de Laurentis

The EHT is still active. The collaboration is still taking observations of Sgr A* in order to refine their observations and see more, to see sharper. They are also working to expand their current capabilities.

More discoveries may await in the petabytes worth of observation data taken in 2022, which will be analyzed in more detail after the EHT team works on observations from 2018 and 2021.

“Our observing skills have greatly improved between 2017. And now, so we have high expectations for what we will find in this data,” de Laurentis says.

As for herself, she hopes to keep working on the EHT and on theories of gravity in general. Pouring herself into the work and, in some ways, finding herself there too.

“Working at EHT has changed my way of life,” she says. “I learned that the feeling of smallness we sometimes feel as humans can be defeated and transformed into greatness by collaborating with others, sharing, communicating, and relating with trust.”

Growing up, Mariafelicia de Laurentis always wanted to find more than an occupation. She wanted a calling. “I didn’t want an ordinary job. I wanted to leave a mark,” de Laurentis tells Inverse. “And maybe having the name imprinted on the page of a book that changed history: this is my concept of Earthly eternity.”…

Growing up, Mariafelicia de Laurentis always wanted to find more than an occupation. She wanted a calling. “I didn’t want an ordinary job. I wanted to leave a mark,” de Laurentis tells Inverse. “And maybe having the name imprinted on the page of a book that changed history: this is my concept of Earthly eternity.”…