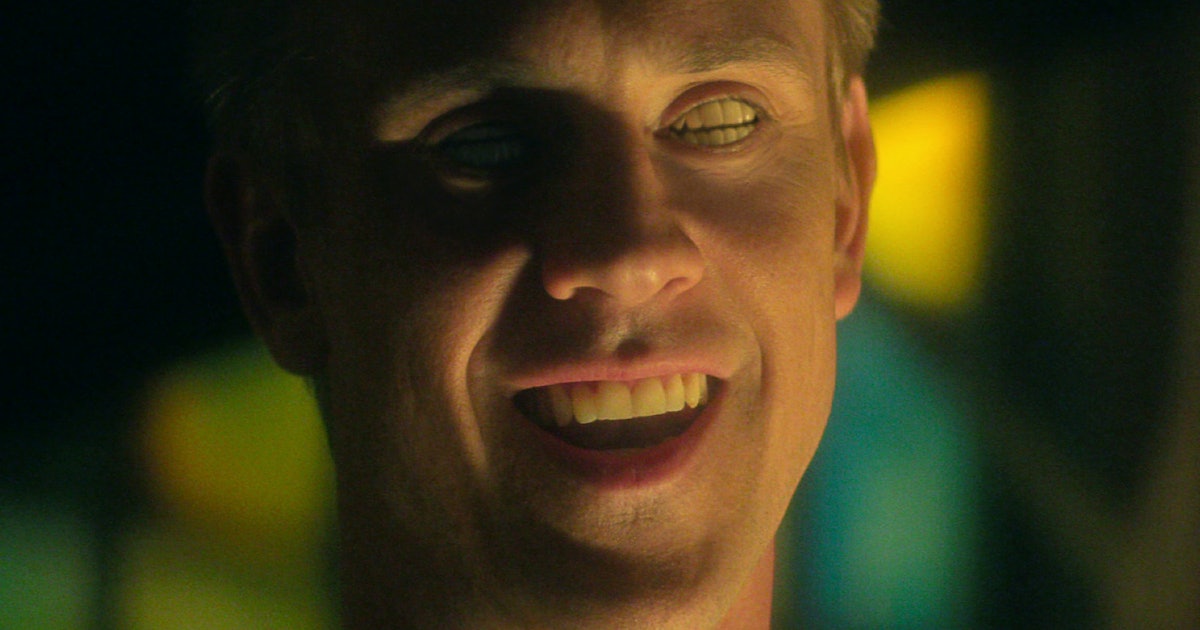 Boyd Holbrook has sympathy for the devil — or, at least, for The Sandman villain even more terrifying than Lucifer themself.

“That’s the really good payoff: if you can get people to still question a character’s humanity after they’ve just been a complete bastard,” Holbrook tells Inverse.

And The Corinthian sure is a bastard. A former Nightmare created by Morpheus (Tom Sturridge) who escapes into the real world following the King of the Dreaming’s imprisonment, he’s a sinister serial killer masquerading as a suave Southern gentleman (Holbrook’s own natural drawl peeking through) with a fondness for sunglasses… and human eyeballs. Originally appearing only a handful of times in The Doll’s House comic arc, The Corinthian became the big bad of the Netflix adaptation of Neil Gaiman’s seminal graphic novels.

But unlike the more mercurial comic book version of the character, Holbrook’s Corinthian plays the long game. Netflix’s The Sandman reimagines the Nightmare as “a bit more of a connoisseur; he’s a bit more refined,” Holbrook says. And Holbrook plays that elegant edge up deliciously, flashing a megawatt smile and oozing charm in every scene. If you could see his eyes behind those sunglasses, you imagine they’d be twinkling. (Of course, the terrifying reveal tells us that’s not the case.)

“He’s not the guy who’s going to whack you over the head and drag you into an alley,” Holbrook says. “He’s more sophisticated than that. You’re going to welcome him into your home.”

In an interview with Inverse for our Scene Stealers end-of-year series, Holbrook opens up about landing the part of The Corinthian, why he prefers supporting roles, and how he went about portraying the stuff that nightmares are made of.

When you signed on to play the Corinthian, how aware were you of Neil Gaiman’s Sandman graphic novels?

I knew about The Sandman from high school. But since The Corinthian was only in one book, I hadn’t heard of that character.

There was just one scene to go off for the audition. But sometimes you get a feeling about it, like “Wow this is my next job.” I thought the audition went really well. I didn’t hear back for six months, just silence. I totally forgot about the job. And then [The Sandman co-creator] Allan Heinberg and Neil gave me a call and they said, “You know, we’ve exhausted this process. And we can’t hire anybody else but you. We’ve tried, we’ve really tried!”

So the scene that you auditioned with, was it based on a major scene that The Corinthian has in the graphic novel at the serial killer convention?

No, it was the introduction scene to The Corinthian. The visualization of him is quite striking, but obviously not when he’s got his glasses. His eyes came out, or he took his glasses off. That was a really important moment.

When you think of these supernatural shows, it’s like “Wow, do I have to act more?” How do you put yourself in these beyond-reality scenarios? I don’t have superpowers, so how do you make it grounded and real? That moment was the exact definement of all that.

If you have insulin and you do an insulin shot, it’s not a big deal when you jab yourself in the arm; it’s like second nature. And so revealing these glasses and existing with these eyes — if it’s done in a nonchalant way, then it was more creepy and it was more unsettling. Rather than like “Here’s Johnny!”

Yeah, I found that’s really in tone with the overall character. You have to go in motion with that tone, ride that tone.

“Supporting roles really are the best.”

The Netflix series gives The Corinthian a much bigger role than the comics. Was it exciting to play that expanded part and explore original storylines?

Yeah, that was one of the main reasons it was successful. Because you only had one scene in a comic of this guy in a serial convention. Maybe in the comic book, [he] was a little bit more coarse. And what we thought about, as we were developing the character, is that if this guy’s been around forever, then he’s a bit more of a connoisseur; he’s a bit more refined. He’s not the guy who’s going to whack you over the head and drag you into an alley. He’s more sophisticated than that. You’re going to welcome him into your home.

Did you draw from any specific inspirations? Did you look at any other sort of serial killer characters or even supernatural characters?

Yeah, all the time. He’s definitely more in the Hannibal Lecter type of camp. But all those things come out subconsciously through the writing.

There was kind of a “I’m being torn over here, and I’ve got to go do this.” I think that was a really good way to rack up the tension building into those later episodes. He’s a little bit of a cult celebrity. And he’s making a deal on the side and also looking out for Jed. All kinds of disturbing things are happening. It’s why it’s a great character because the writers give you so much to do.

Did you feel any sympathy for The Corinthian who, despite all of his terrible deeds and his origins as a Nightmare, has a very simple motivation? He just wants to exist in the real world — even if he wants to turn the real world into a nightmare.

I absolutely do. That’s the really good payoff: if you can get people to still question a character’s humanity after they’ve just been a complete bastard. I love it a lot because it’s just like how much can you put yourself into really believing that the people’s eyes you’re eating could actually fill you up with life? I love daydreaming and going into that space.

Was there a scene that you liked performing the most in The Sandman Season 1?

There’s a scene with protecting Jed from Danny Kirrane’s character [Fun Land]. That was a cool scene. The speech was quite fun — to be in front of all those people. I mean, it’s all really fun stuff with Jed, like with the ice cream. A lot of that relationship was great.

You’ve played your share of noble leading men and scummy bad guys, but which is the one that you enjoy playing the most, the hero or the villain?

I think supporting roles really are the best things there are. There’s always an anchor in a story. Usually, that’s the lead. I want those parts because there are some great, great characters out there that I still get to play. But those supporting roles usually have more complexity because they’re seeking out the lead, and the lead is having to deal with that.

So Season 1 of The Sandman ends with the Corinthian being unmade. But in this world, new Dreams and Nightmares can take many forms. So do you see yourself returning for Season 2 of The Sandman, maybe as another character even?

I think that’s how I see myself. I think I do. I had a conversation this morning, actually. If you enjoyed The Corinthian in Season 1, in Season 2 he could come back and reincarnate. There are comics out there that have had that. And there’s actually an entirely new comic. So [Gaiman] is really opening up in the world.

With timelines and however they want to do seasons, you could [cover the time] before The Corinthian was made a Nightmare. So all kinds of clever ways. I just think he’s a great character.

Boyd Holbrook has sympathy for the devil — or, at least, for The Sandman villain even more terrifying than Lucifer themself. “That’s the really good payoff: if you can get people to still question a character’s humanity after they’ve just been a complete bastard,” Holbrook tells Inverse. And The Corinthian sure is a bastard. A…

Boyd Holbrook has sympathy for the devil — or, at least, for The Sandman villain even more terrifying than Lucifer themself. “That’s the really good payoff: if you can get people to still question a character’s humanity after they’ve just been a complete bastard,” Holbrook tells Inverse. And The Corinthian sure is a bastard. A…