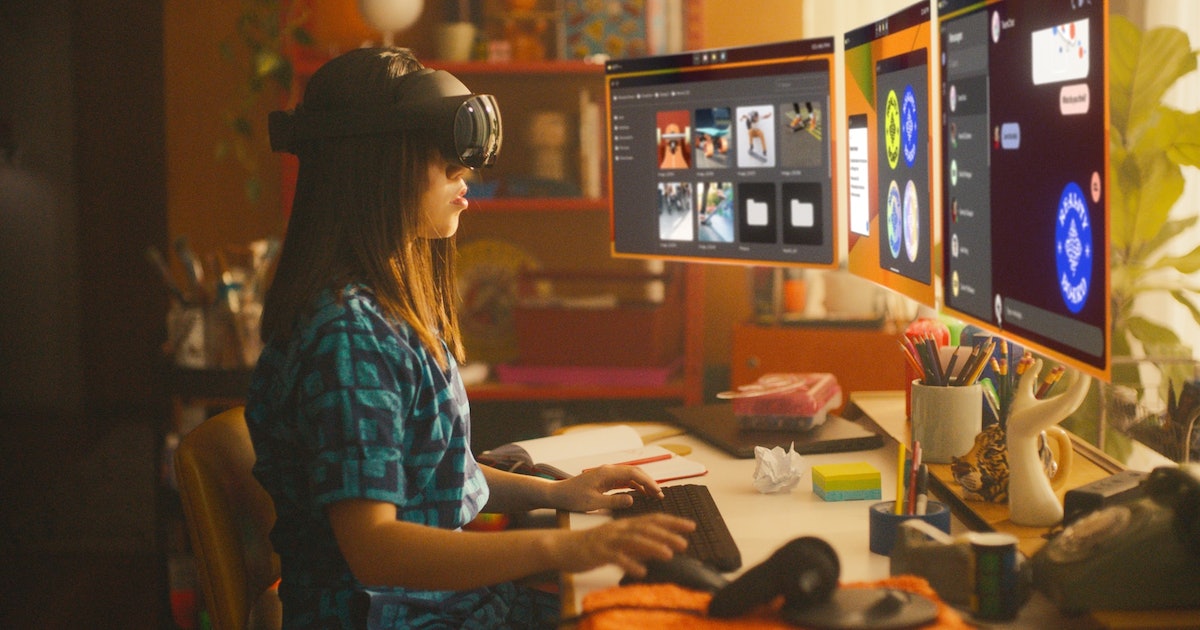 The Quest Pro is not going to replace your monitor setup

The Quest Pro is designed for productivity — though, as I found in my review, the people who will immediately benefit from it are a small group for now — and one of the unique ways it can improve on the average remote work experience is by acting as an external monitor, or multiple.

If you’re browsing or doing simple office tasks, all Quest devices have a built-in web browser, access to 2D versions of common productivity apps like Adobe Acrobat and Monday.com, and the ability to connect to a Bluetooth keyboard and mouse. For anything else, wirelessly jacking into your laptop or desktop is a necessity.

Rest assured, I never had any issues setting up the Quest Pro to be a virtual set of monitors, but trying to work this way highlighted pain points that could make it unfeasible for some.

Regardless of what app you’re using to access your computer and display it on your Quest Pro, you’ll need some desktop client to pair with it. Take Meta’s own app, Horizon Workrooms, which besides acting as a tool for holding virtual meetings and collaborations across 2D and 3D spaces, also includes a private “office” where you can use three virtual monitors to spread out work that would normally be confined to one laptop screen.

Horizon Workrooms uses Meta Remote Desktop, a barebones app that basically streams content from your computer to your headset (and requires permission to record your screen and microphone audio). It works like a charm once you log into your Meta account, but it doesn’t exactly inspire confidence or security in the same way as Meta’s other software.

As much as I’m curious about what it could be like to have five virtual monitors screaming at me in a similar app like Immersed, I don’t know if I want to give yet another remote desktop utility access to my screen. It’s important these apps offer an easy way to connect to any computer, regardless of what operating system they use, but that’s also where a company like Apple would have a clear advantage in controlling both the VR and desktop operating systems.

One imagines that if Apple does introduce a mixed reality headset next year, it’ll have a more frictionless way of connecting your Mac to your device than relying on downloading sketchy software.

The displays could be improved

The Quest Pro, in terms of displays, is a notable step-up compared to the Quest 2. Whereas Meta’s entry-level headset had an LCD display (divided in two) with 100 nits of brightness and 1,920 x 3,664 resolution, the Quest Pro steps things up with dual 1,800 x 1,920 displays with mini-LED backlights. That makes the Quest Pro both brighter and clearer than its lower-cost counterpart. The only problem is it’s still not clear enough for longer-term use.

I noticed it most in passthrough mode, where anything viewed from the Quest Pro’s improved color passthrough camera was still grainy enough to make reading text on my phone or laptop screen challenging. Viewing virtual monitors displayed on the Quest Pro had its own issues. Everything was clear enough to read, but my eyes felt strained much sooner than they would be looking at my laptop. You’re probably not going to use a virtual monitor set up in the Quest Pro for very long.

The shorter battery life of the Quest Pro is well-documented at this point. While that doesn’t pose as much of an issue if you’re using the headset at home and can charge it over USB-C or by plopping it on the charging dock, it does impact using the Quest Pro’s virtual monitors outside of your home office — one of the places it could be the most useful. Meta doesn’t imagine anyone should use the Quest Pro all day for work, and from a hardware perspective, it’s clear the headset won’t comfortably support that anyway.

The “office replacement” hasn’t arrived yet

My original assumptions about the Quest Pro were off-base. It will not replace a more traditional office setup, at least not yet. There are clear bumps to iron out in regard to software and some hardware limitations that will keep some from throwing out their external monitors. Credit where credit is due; using the Quest Pro as a virtual workspace is as simple as it can be right now, it’s just not as enjoyable as it should be. And that’s something that Meta will hopefully have to address in future versions of its headsets and Horizon Workrooms if it wants these devices to be truly useful for productivity.

The Quest Pro is designed for productivity — though, as I found in my review, the people who will immediately benefit from it are a small group for now — and one of the unique ways it can improve on the average remote work experience is by acting as an external monitor, or multiple. If…

The Quest Pro is designed for productivity — though, as I found in my review, the people who will immediately benefit from it are a small group for now — and one of the unique ways it can improve on the average remote work experience is by acting as an external monitor, or multiple. If…

The worst thing about the Quest Pro isn’t its price, it’s the speakers