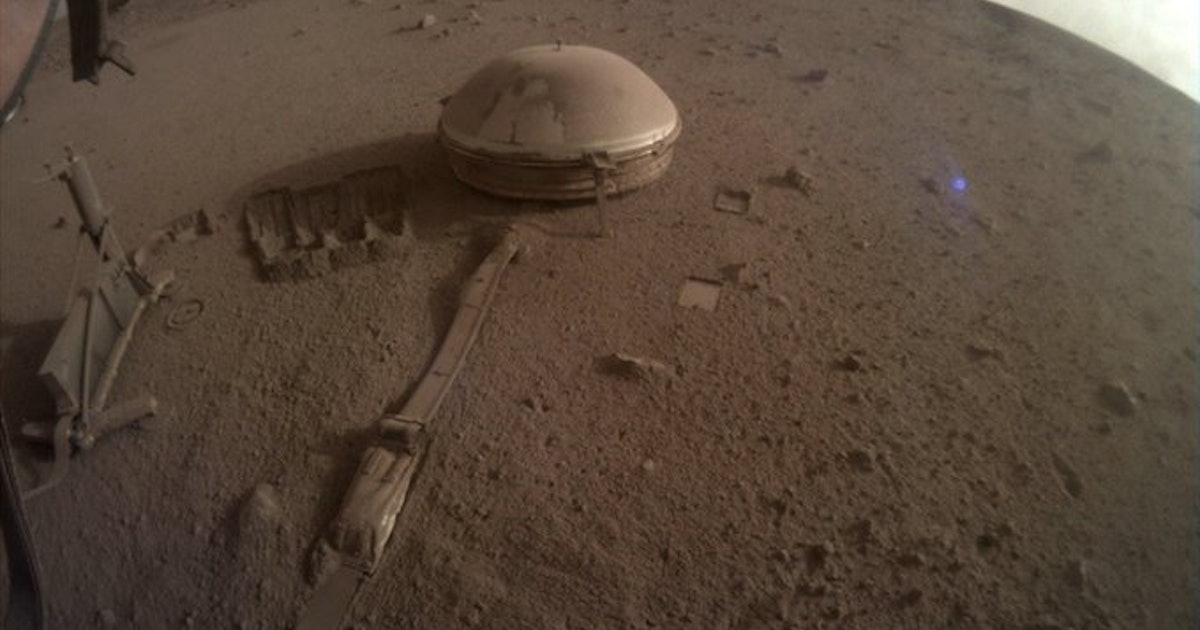 NASA’s InSight lander just sent its final image from Mars, and the darkness is closing in

NASA’s InSight lander is preparing for its long Martian rest, and it’s making us all cry.

In a poignant tweet, the Mars lander’s social media team shared a dusty image of InSight’s landing site, along with what the hardworking space robot might have said, if it could actually tweet: “My power’s really low, so this may be the last image I can send. Don’t worry about me though: my time here has been both productive and serene. If I can keep talking to my mission team, I will — but I’ll be signing off here soon. Thanks for staying with me.”

Sometime very soon, a satellite orbiting Mars will ping InSight for a communications check-in, and the lander won’t respond. A few days later, the satellite will try again; when InSight still doesn’t answer, NASA will declare the lander dead. We won’t witness the kind of heroic, almost frantic efforts NASA engineers made to restore communications with the Opportunity Rover.

InSight’s human teams have been working for months with the knowledge that any day’s satellite check-in could be the one that InSight simply doesn’t answer.

“It’s kind of like having an old, junky car parked out front. We’re just really excited every time it starts up, so there’s a little something to celebrate every week,” Emily Stough, a senior engineer on InSight’s operations team at the Jet Propulsion Laboratory, tells Inverse. “Sometimes, you know, we’re worried about the demise of the lander, and you know, dust storms and weather, but other times, we’re just really excited that we’re still going and we’re still getting science.”

The robot did its best — InSight’s team of engineers and scientists have always known the lander’s days were numbered. When it touched down on the Martian equatorial plain in 2018, it was already doomed to die a stifling death beneath layers of fine, clinging Martian dust, which would block sunlight from reaching the solar panels that provided its energy.

“There probably are things that could have been done differently to make the mission last longer. But when we put something together like this, we don’t have an infinite budget,” InSight project scientist Mark Panning tells Inverse. “You really have to think about what science you want to accomplish. What are the questions you want to answer, and what measurements do you need to make to answer those questions? And then build a spacecraft that can do that with a little bit of cushion.” And that’s what InSight’s designers did.

Panning says he’s often impressed by the ideas that members of the public suggest could have saved InSight from certain doom, from brushes and windshield wipers to air blowers to clear away the dust — or even building the solar panels with surfaces that resembled air hockey tables. But building for space is more complicated, and more expensive, than people often realize. A brush that costs $2 at a local hardware store could turn into a multi-million-dollar piece of hardware by the time engineers install it on a lander’s robotic arm and put it through a battery of tests to make sure it works in every imaginable scenario — and doesn’t break anything else in the process.

“The most efficient thing we could do is make the solar panels a lot bigger than we need, so that we have many times more energy than we need at the beginning of the mission, but we’re sure we’re going to last long enough to make the measurements we want to.” In the end, InSight’s oversized solar panels lasted through the primary two-year mission — and two years beyond that. “That’s good engineering,” says Panning.

Good work, InSight — InSight landed on Elysium Planitia, a plain straddling the Martian equator, in November 2018 after a six-and-a-half-month flight from Florida. Over the next four years, the lander’s instruments recorded more than 1,300 Marsquakes, while other instruments aboard the lander measured Martian weather and the tattered remains of the planet’s magnetic field.

InSight revealed that Mars is a much shakier world than anyone expected, but its constant rumbles are mostly small; the largest Marsquake ever recorded, in early May 2022, was a magnitude 5.0. Here on Earth, that’s the kind of thing people in earthquake-prone regions tend to shrug off, but for future Mars explorers, it could be a bigger safety risk.

“If you’re in an environment where you’re trying to keep an atmosphere that’s habitable, while the rest of the world around you is not, things falling over is a really bad thing,” says Panning.

Using the timing of seismic waves moving through the ground, Panning and his colleagues were able to fulfill one of their main goals for the mission: mapping the inner depths of Mars’ crust, mantle, and core.

The one thing InSight didn’t succeed at was measuring the heat flow in the planet’s interior, which could have given scientists clues about the energy behind all that shaking. The heat probe, or mole, was meant to gather data from a vantage point about 3 meters (10 feet) beneath the surface, but despite two years of effort — and literally trying to hammer the mole into the ground with InSight’s robotic arm — InSight managed to bury the instrument only a few centimeters into the Martian regolith.

“When we started to hammer, it just didn’t really go anywhere,” says Stough.

Holding on as long as possible — The robotic arm came in handy (ahem) in another unexpected way in 2020, when Mars was at its farthest point from the Sun and the light reaching InSight’s solar panels was dimmer than usual.

“One of our scientists had a theory that if we use our scoop to scoop up some of the regolith on the ground, and we drop it next to our solar panels while the wind is blowing, the wind might blow some larger particles onto the solar arrays, which will kind of excite the smaller, dusty, lightweight ones into the air so that the wind can blow them away,” says Stough. “It seems like a very wild idea, but so many things in science and engineering are, the first time you hear them. And we tried it, and it actually worked.”

The maneuver worked well enough to provide InSight with a boost of 30 watt-hours, enough to run the seismometer for eight hours. But later attempts were less successful, and it soon became clear that the stopgap measure couldn’t keep the lander going forever.

Over the summer of 2022, with power generation down to 20 percent, InSight’s science team decided to shut down most of the lander’s instruments: wind sensors, pressure sensors, a magnetometer, and a radiometer. Instead, every bit of remaining power would be reserved for InSight’s seismometer — which would run for just a few hours during the quietest part of the Martian day. The team also turned off a fault protection system which was supposed to safely shut the lander down if its power supply ran too low.

And that bare-bones, to-the-bitter-end approach has worked for the last several months. By November 2022, with InSight’s fourth anniversary on Mars approaching, the lander was producing just 10 percent of the power it had at the beginning of its mission.

The end is nigh — Now, as 2022 draws to a close, InSight’s team is waiting for the inevitable end.

“We’ll expect downlink, but we won’t get downlink,” says Stough. “We’ll probably double check with all the ground teams to make sure there actually is no data, we’ll check with the orbiters, we’ll check with the Deep Space Network, we’ll look everywhere for that data before saying ‘okay, we missed the pass.’ And then we hold our breath for a few days while we wait for the next one.”

InSight has given its Earthbound colleagues a few close calls before, which is why they’ll wait for a second missed communications window before declaring the mission over — and even then, they won’t entirely give up all hope.

“InSight was designed to wake back up if the batteries are able to charge up again. So there is a chance, albeit small, that we could hear from it again,” says Stough. The long-range radio antennae of the Deep Space Network will listen in occasionally for years to come, just in case a wildly unlikely gust of wind happens to clear the dust from InSight’s solar panels and revive the lander.

But once the mission is over, Stough and her operations team will move on to other projects; many are already splitting their time between InSight and other missions, like the Perseverance rover. And for Panning and the other scientists, work will carry on longer after InSight falls silent.

His team is adding InSight’s science data to NASA’s Planetary Data System, as well as an archive run by the Incorporated Research Institutions for Seismology; in both places, InSight’s Marsquake measurements will be accessible to researchers around the world. Along with moonquake data from the Apollo missions, InSight has provided one of only two sets of alien seismic data ever recorded.

“We’ve still got lots of science to do,” says Panning.

NASA’s InSight lander is preparing for its long Martian rest, and it’s making us all cry. In a poignant tweet, the Mars lander’s social media team shared a dusty image of InSight’s landing site, along with what the hardworking space robot might have said, if it could actually tweet: “My power’s really low, so this…

NASA’s InSight lander is preparing for its long Martian rest, and it’s making us all cry. In a poignant tweet, the Mars lander’s social media team shared a dusty image of InSight’s landing site, along with what the hardworking space robot might have said, if it could actually tweet: “My power’s really low, so this…

Nintendo Switch in 2023: The 6 most anticipated games coming this year

Do genetics determine how you respond to psychedelics? A recent study suggests they might