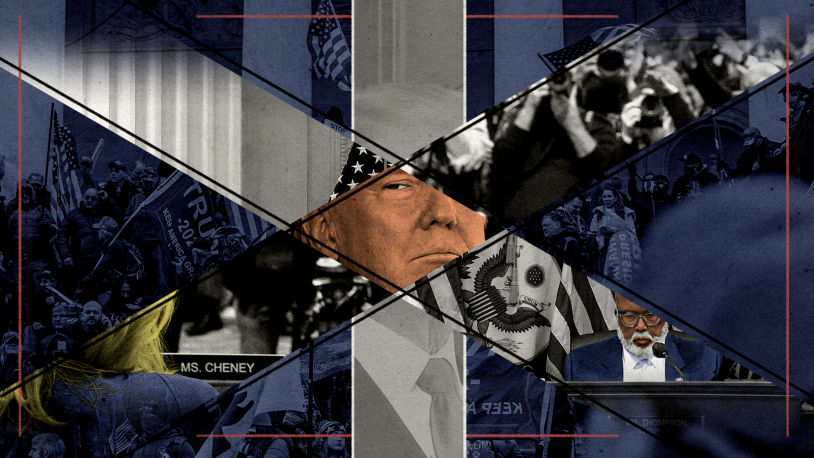 The Jan. 6 committee’s criminal referrals for Donald Trump are in — here’s what happens next

Nearly three years after a mob of MAGA-animated rioters stormed the United States Capitol complex in a push to overturn the results of the 2020 presidential election, the bipartisan congressional committee established to investigate the events of Jan. 6 held its final public meeting on Monday. The committee concluded its years-long effort with criminal referrals against former President Donald Trump and his alleged enablers.

With referrals made, and the committee set to release a full, final report in the coming days, the overarching question being their entire raison d’etre now shifts from “what has their investigation uncovered?” to “what, if anything, will anyone do about it?” Here’s everything you need to know:

What’s in the criminal referrals?

The unanimously-approved referrals targeting Trump, his attorney John Eastman, and as-of-yet unspecified “others” are:

“No man who ever behaved that way at that moment in time should ever serve in public office again,” outgoing Rep. Liz Cheney (R-Wy.) intoned in the opening minutes of the hearing. “He is unfit for any office.”

“This was an utter moral failure and a clear dereliction of duty.” Rep. Liz Cheney slammed former President Donald Trump and said that public servants stood against his “corrupt pressure.” She said law enforcement officers “saved lives and democracy.” pic.twitter.com/wGX1DLEkLW

While the committee has made criminal referrals — and notched convictions — in the past, Monday’s hearing carried with it an air of consequential finality befitting the historic significance of recommending the Department of Justice prosecute a former president and current presidential candidate. “This committee is nearing the end of its work,” co-chair Rep. Bennie Thompson (D-Miss.) said. “But as a country, we remain in strange and uncharted waters.”

What will happen with the criminal referrals?

While Congress can do a lot of things in the course of an investigation — subpoena witnesses and documents, compel testimony, etc — one thing it can’t do is actually launch its own prosecution. Instead, it puts that particular ball squarely in the Justice Department’s court — by “referring” a case to the DOJ in the hopes that it’ll act on the information therein, Congress is essentially saying “we’ve done our part, now it’s your turn.”

“A referral really just means that one part of the government is sending to the executive government information and requesting that the Department of Justice investigate these matters,” George Washington University Law Professor Stephen Saltzburg told The Washington Post. Crucially, the Justice Department is entirely within its rights to ignore that request. In the case of Trump’s criminal referrals for “obstruction of an official proceeding” and “conspiracy to defraud the federal government,” the congressional referral is bolstered by a judicial ruling authored by U.S. District Judge David Carter, who determined in March that “more likely than not […] President Trump corruptly attempted to obstruct the Joint Session of Congress on January 6, 2021.”

This is not the first time the committee has made criminal referrals stemming from its investigation. In July, former Trump adviser Stephen Bannon was found guilty of contempt of Congress for refusing a subpoena to testify before the panel. But, the Justice Department also declined to charge former Trump Chief of Staff Mark Meadows and Deputy Chief Dan Scavino for the same. In The Washington Post, columnist Philip Bump pointed out that congressional referrals to the DOJ are often as much a “performative” gesture as they are a legal one, filed to focus public attention rather than having any hope of leading to actual prosecutions.

As CNN notes, committee investigators are much more concerned about their referral against Trump for “insurrection,” which — unlike more commonplace indictments like contempt of Congress — has relatively little precedent, and which has largely been eschewed by prosecutors in other Jan. 6-related cases for the similar charges of “seditious conspiracy.”

Ultimately, the decision on whether or not to take up the exact charges referred by the committee falls on Attorney General Merrick Garland. While it remains to be seen whether Garland will act on the referrals as such, he has already appointed Jack Smith, a longtime former DOJ prosecutor, to serve as special counsel overseeing all the department’s Trump-related investigations — a sign that he is at least open to pursuing some form of criminal charges against the former president, and may draw on evidence provided by the committee, even if he doesn’t act on the exact charges recommended.

What about House Ethics Sanctions?

The four criminal referrals against Trump, Eastman, and the unspecified “others” were not the committee’s sole actions on Monday. After introducing the four criminal charges the committee hopes the Justice Department will address, Rep. Jamie Raskin (D-Md.) announced that four of his fellow members of Congress would be referred to the House Ethics Committee for refusing to comply with subpoenas to testify in the investigation. While Raskin did not name the four representatives in question during the meeting itself, an executive summary of the committee’s report issued shortly after the proceedings concluded identified GOP leader and aspiring House Speaker Rep. Kevin McCarthy (R-Calif.), Rep. Jim Jordan (R-Ohio), Rep. Andy Biggs (R-Ariz.) and Rep. Scott Perry (R-Penn.) as the lawmakers to be referred.

In addition to asking the House Ethics Committee to sanction the four for failing to abide by a lawfully issued subpoena, the committee writes that it also “believes that each of these individuals, along with other Members who attended the December 21st planning meeting with President Trump at the White House, should be questioned in a public forum about their advance knowledge of and role in President Trump’s plan to prevent the peaceful transition of power.”

Unlike most other congressional bodies, the House Ethics Committee is comprised of an equal number of Democrats and Republicans, no matter the incoming GOP House majority. That shift would, however, create a broader chilling effect across Congress where some Republicans have already vowed to launch their own punitive counter-investigations against the Jan. 6 committee. While it’s possible, then, that the Ethics Committee could take up the referrals in the coming congressional term, it’s unlikely any of the group’s Republican members would do so.

Attorney Robert Walker, who previously served as chief Ethics Committee counsel for both the House and Senate, acknowledged the difficulties associated with this sort of referral, given the impending flip of House power, and the dwindling time left in the current legislative session.

“For good or ill, I think it would be putting the Ethics Committee in a difficult position to refer these matters to the committee,” he told Roll Call in the days leading up to this final hearing.

In a statement to Philadelphia Inquirer reporter Jonathan Tamari, Rep. Perry criticized the committee’s ethics referral, calling it “more games from a petulant and soon-to-be defunct kangaroo court desperate for revenge and struggling to get out from under the weight of its own irrelevancy.”

December 20, 2022 December 20, 2022 Nearly three years after a mob of MAGA-animated rioters stormed the United States Capitol complex in a push to overturn the results of the 2020 presidential election, the bipartisan congressional committee established to investigate the events of Jan. 6 held its final public meeting on Monday. The committee concluded its…

December 20, 2022 December 20, 2022 Nearly three years after a mob of MAGA-animated rioters stormed the United States Capitol complex in a push to overturn the results of the 2020 presidential election, the bipartisan congressional committee established to investigate the events of Jan. 6 held its final public meeting on Monday. The committee concluded its…

Biden recorded admitting Iran nuclear deal ‘is dead, but we are not gonna announce it’