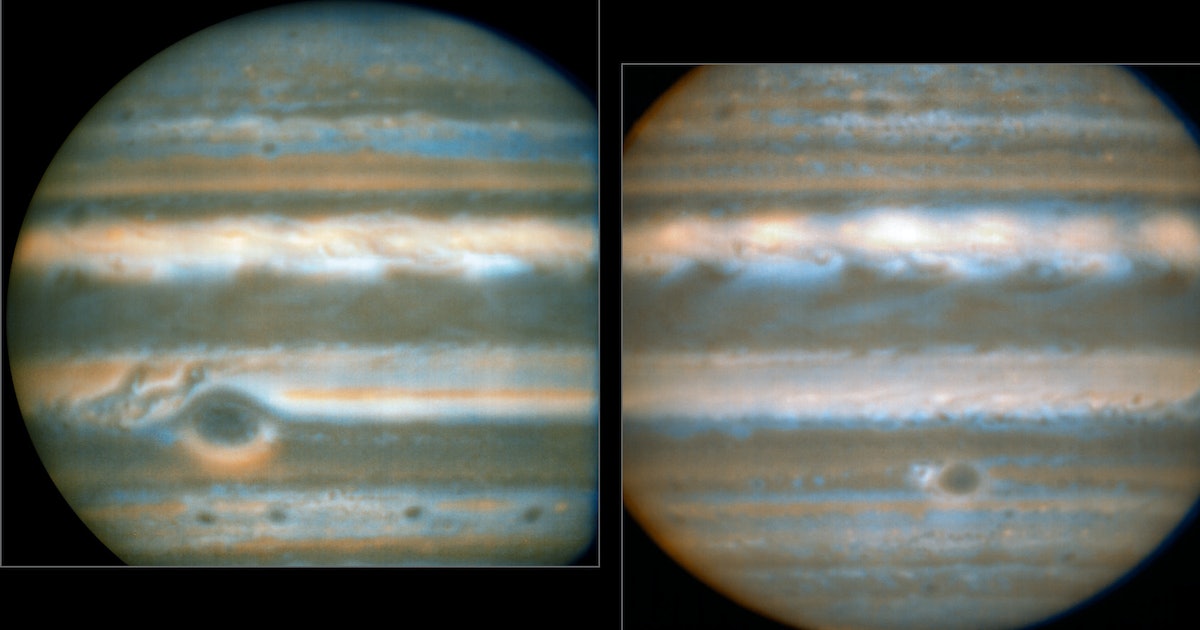 Scientists have discovered surprising weather patterns on Jupiter, and it only took 36 years of data from multiple telescopes in space and on the ground.

Despite a notable lack of proper seasons, the venerable gas giant shows weirdly regular variations in temperature in its northern and southern hemispheres. Jet Propulsion Laboratory researcher Glenn Orton and his colleagues say their findings could be the first step toward building digital models to predict weather not only on Jupiter, but on giant exoplanets. They recently published their findings in the journal Nature Astronomy.

What’s New — Temperatures in Jupiter’s troposphere — the deep layer of a planet’s atmosphere where clouds form and weather happens — rise and fall at regular intervals. That sounds pretty familiar to Earthlings, where temperatures change with the passing seasons as our rocky little planet orbits the Sun. The 23.5-degree tilt in our planet’s axis means that one hemisphere gets more direct sunlight than the other during part of the year (it’s literally the reason for the season), and temperatures vary accordingly.

But by all rights, Jupiter shouldn’t have seasons; its axis tilts by a very slight 3 degrees. And although the season-like warming and cooling of the gas giant’s atmosphere happen at regular intervals, the timing isn’t connected to the gas giant’s barely-there seasons. Orton and his colleagues say it doesn’t seem to have anything to do with any other aspect of Jupiter’s 12-year orbit or 10-hour rotation, either. At the moment, the researchers who spotted the pattern aren’t quite sure what causes it.

“It’s similar to a phenomenon we see on Earth, where weather and climate patterns in one region can have a noticeable influence on weather elsewhere,” says Orton in a recent press statement.

Here’s the Background — If you want to study how temperatures on Jupiter change over the course of a Jovian year, you’d better have a lot of patience. The gas giant takes 12 (Earth) years to orbit the Sun, and Orton and his colleagues observed the temperature in the lower layer of Jupiter’s atmosphere — thanks to infrared radiation — at regular intervals over three whole Jovian years, or about 36 Earth years, starting in 1978. Some of the undergraduate students who helped finish the study hadn’t been born yet when it started.

Orton and his colleagues patched together data from NASA’s Voyager 1, Voyager 2, and Cassini spacecraft, along with some of the largest telescopes on Earth, like the European Southern Observatory’s painfully generically-named Very Large Telescope and the National Astronomical Observatory of Japan’s Subaru Telescope. They focused on the troposphere, the layer of a planet’s atmosphere where clouds form and weather happens, including Jupiter’s bands of red, orange, brown, and white.

Thanks to even older data from NASA’s Pioneer 10 and Pioneer 11 spacecraft, which flew past Jupiter in the 1970s, Orton and his colleagues and other scientists already knew that the lighter-colored bands tend to mark cooler areas of Jupiter’s atmosphere, while warmer areas tend to show up as darker bands of brown and red. But a single flyby, or even a few years of observation, wasn’t enough to catch the longer pattern of high and low temperatures in Jupiter’s atmosphere.

What’s Next — Temperature plays a huge role in driving a planet’s weather, because temperature determines air pressure, which creates wind, and temperature interacts with humidity to create clouds and precipitation. Understanding how heat moves around Jupiter’s atmosphere, at least on a large scale, is the first step to being able to build digital models of the gas giant’s climate, and maybe even its global weather (the more fickle, small-scale sibling of climate).

“The even bigger picture question is if we can someday extend this to other giant planets to see if similar patterns show up,” Leigh Fletcher, a University of Leicester researcher and co-author on the recent study, said. That may eventually include gas giants orbiting distant stars.

First, however, scientists need to understand more about what makes Jupiter’s weather systems tick. Orton and his colleagues noticed that at the gas giant’s equator, temperatures in the stratosphere, an upper layer of the atmosphere, seem to heat up as the troposphere cools down, and vice versa. It’s possible that the two adjacent layers of gas are exchanging heat with each other in a cycle related to the one between hemispheres.

“To understand what’s driving these patterns and why they occur on these particular timescales, we need to explore both above and below the cloudy layers,” says Fletcher.

The data Orton and his colleagues need could come from NASA’s Juno mission, the James Webb Space Telescope, and the Earth-based telescopes that helped them discover the planet’s weird weather pattern in the first place.

Scientists have discovered surprising weather patterns on Jupiter, and it only took 36 years of data from multiple telescopes in space and on the ground. Despite a notable lack of proper seasons, the venerable gas giant shows weirdly regular variations in temperature in its northern and southern hemispheres. Jet Propulsion Laboratory researcher Glenn Orton and…

Scientists have discovered surprising weather patterns on Jupiter, and it only took 36 years of data from multiple telescopes in space and on the ground. Despite a notable lack of proper seasons, the venerable gas giant shows weirdly regular variations in temperature in its northern and southern hemispheres. Jet Propulsion Laboratory researcher Glenn Orton and…

10 biggest space launches and missions of 2022