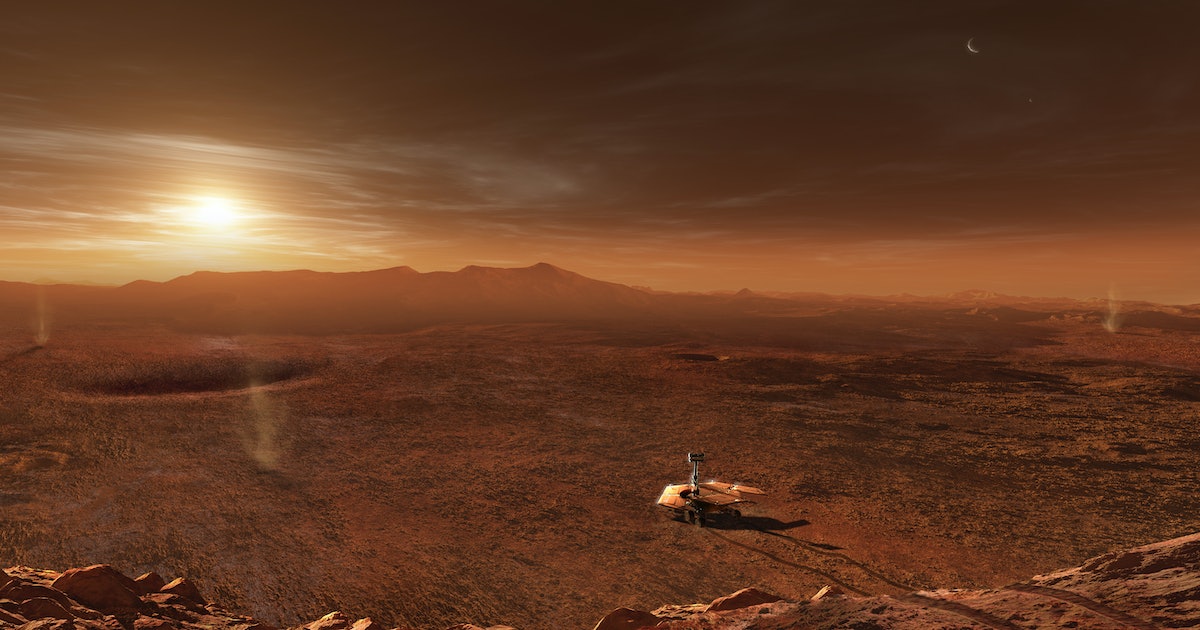 Future Mars inhabitants may be able to use one resource on Mars they hadn’t anticipated to power future exploration of the planet, according to a new study.

By tapping into wind power, space agencies could compensate for the times in the Martian day when solar energy is low or unattainable, like twilight and nighttime. Wind power could also be available during dark seasons on Mars, like winter, when days are shorter — despite the low atmospheric pressure on the Red Planet.

This possibility excites Victoria Hartwick, a postdoctoral fellow at NASA’s Ames Research Center in California. “What I think is most important about this study, and most exciting, is that, by utilizing this power resource that had really been historically disregarded, we are opening up a broader part of the Mars surface for exploration,” she tells Inverse. She led the new study that investigated wind power on Mars, published Monday in the journal Nature Astronomy.

“This allows us to access — with a potential future human mission — really interesting sites that might have been disregarded if we only had a source of solar power alone … really fascinating parts of the planet that have amazing histories and scientific merit from multiple perspectives,” Hartwick says.

“We’re really excited to see how we could use wind power, alone and in concert with solar energy, to really provide a stable power resource for human missions in the future, if that’s the direction we end up going,” she adds.

Here’s the background — Wind energy has been “disregarded” as a power source on Mars for a few reasons.

According to the study, the low atmospheric density on Mars reduces the force associated with winds. And then, when NASA’s Viking 2 measured Mars’ wind speed data during the 1977 global dust storm, scientists decided to “rule out wind energy as a primary or even secondary backup power resource,” the paper states. (The atmospheric pressure is about 1 percent that of Earth’s.)

The reason for that is “complicated,” Hartwick says. “But in large part, it’s because you are looking at one location on the Mars surface. And Mars winds change dramatically across different areas associated with this topography.” The paper adds that variations of land features, surface heat characteristics, seasonal solar heating changes and dust “opacity” means that Mars’ wind power potential cannot be painted in a broad stroke.

What they did — When Hartwick heard wind power expert Clara St. Martin from the University of Colorado speak about how a global climate model could inform where wind power might be attainable on Earth, Hartwick thought something similar could be done for the Red Planet.

“I immediately thought, well we have a global climate model for Mars,” Hartwick says. “Can we apply this type of methodology to assess wind power potential for a future human mission to Mars, utilizing the tools we have now?”

Hartwick and her team argue that, in absence of a global network on Mars that could gather distinct surface wind speed measurements, the next best way to assess how the yields of wind power may be different from one place on Mars to another is to use global climate models.

Earth and Mars are different. But Earth models provide a blueprint from which to start.

“What’s exciting about this type of study is, the fundamental physics governing atmospheric dynamics and climate on Earth and on Mars and other planetary systems are all the same,” Hartwick says. “So you can build that framework up and refocus specific areas of a model to really pinpoint specific areas of Mars climate versus Earth climate, versus Venus climate, versus exoplanet climate.”

What they found — The team announced in their paper that wind power is a stable and sustained energy source across “large portions” of Mars. They found roughly 23 sites where wind could yield a good amount of power to complement solar arrays.

One of their top candidates is Deuteronilus Mensae 2 (35° N, 23° E), located in the southern highlands near the border with the northern lowlands, where glaciers may have existed as recently as 10,000 years ago. Another is Protonilus Mensae (38° N, 48° E), a mid-latitude region with a topography that an Arizona State University blog describes as “brain terrain.” Its interconnected troughs and ridges may have formed when water ice turned from solid to gas, or sublimated.

What’s next — Though not an engineer, Hartwick says the study is an invitation to the broader engineering community to investigate how a wind turbine would work on Mars, with a design that would be resolute against the planet’s dust, and designed in a way that it could travel from Earth to Mars, to help explorers reach places on the Red Planet thought to be inaccessible.

Future Mars inhabitants may be able to use one resource on Mars they hadn’t anticipated to power future exploration of the planet, according to a new study. By tapping into wind power, space agencies could compensate for the times in the Martian day when solar energy is low or unattainable, like twilight and nighttime. Wind…

Future Mars inhabitants may be able to use one resource on Mars they hadn’t anticipated to power future exploration of the planet, according to a new study. By tapping into wind power, space agencies could compensate for the times in the Martian day when solar energy is low or unattainable, like twilight and nighttime. Wind…

Ramattra is the franchise’s most important new hero in years