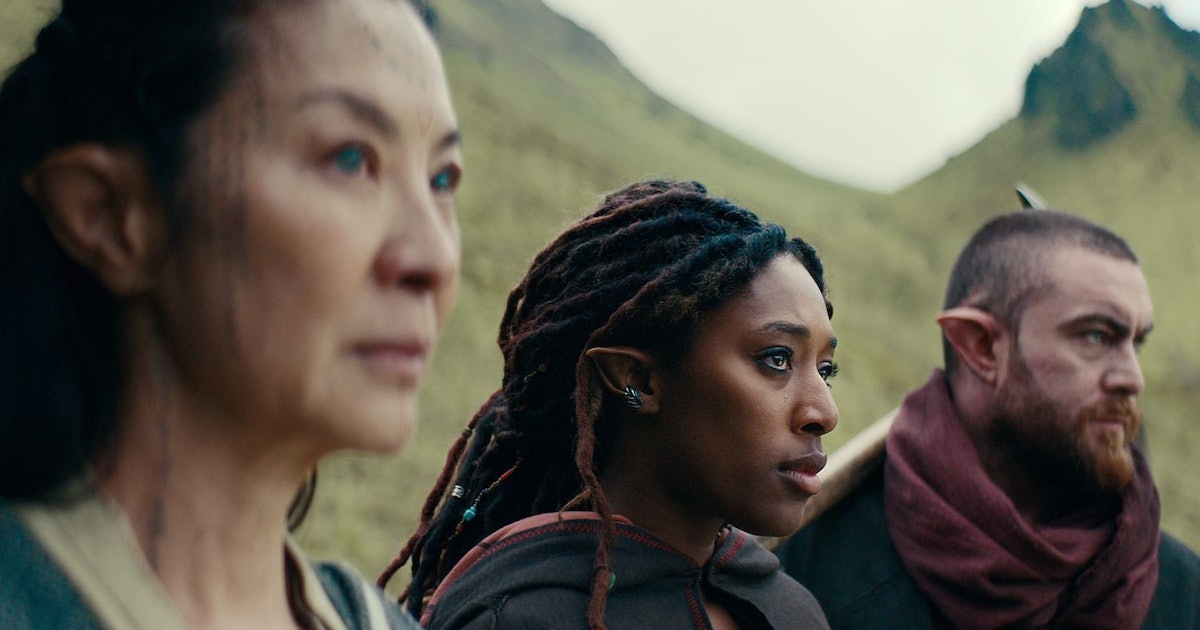 A bad omen for the franchise

“Remember me,” one Elf stubbornly declares in The Witcher: Blood Origin before she rips a dagger from her heart, bleeding herself out instead of staying humble.

After having watched all four episodes of Netflix’s first live-action Witcher spinoff, it appears that this parting line may have been a meta-textual plea of desperation — a dying breath begging for pop cultural relevancy that this bard’s song is undeserving of.

The Witcher: Blood Origin simultaneously takes place somewhere in The Witcher’s timeline at a particularly gruesome moment, and also about 1,200 years before the events of the Netflix show.

The first shot of the miniseries is that of Jaskier (Joey Batey), stumbling about in a fiery forest, dripping in his own (and others’) blood. Not much can be discerned about what, exactly, is going on in Jaskier’s surroundings, but it can be presumed that trouble lies ahead for the bard, his friends Geralt of Rivia (Henry Cavill), Yennefer of Vengerberg (Anya Chalotra), and Princess Ciri of Cintra (Freya Allan), and maybe for his dangerous allies, like King Vizimir of Redania (Ed Birch), too.

But the Jaskier cameo doesn’t last long. Just as the bard is transported to a more peaceful setting and is told by Seanchaí (Minnie Driver), a shapeshifting storyteller, to memorize a song, the audience, along with Jaskier, are literally thrust into the lyrics — the narrative of The Witcher: Blood Origin.

These lyrics cover the creation of the first Witcher, the events leading to the “Conjunction of the Spheres” (when the Witcher’s own Multiverse of Madness collided and converged on one giant landmass), ancient Elven civilization before its demise and clashing Elven clans, and the nefarious beginnings of Eredin Bréacc Glas (Jacob Collins-Levy) and the Wild Hunt. Guiding viewers through all of this Witcher world-building and history — most of which was not the original design of Witcher mastermind Andrzej Sapkowski, who purposefully kept these tidbits of prequel lore vague, nor has any relation to CD Projekt Red’s non-canonical Witcher video games — are seven “misfits.” This band of troublemakers, who traverse the land to radicalize peasants and piss off a queen, are Zacaré (Lizzie Annis), Syndril (Zach Wyatt), Brother Death (Huw Novelli), Meldof (Francesca Mills), Scian (Michelle Yeoh), Fjall (Laurence O’Fuarain), and Éile (Sophia Brown).

If you’re thinking that’s a lot of character arcs and background material and plot-lines to squeeze into four episodes — and therefore impossible to execute successfully in a short span of 160-ish minutes — you might be onto something!

If Netflix subscribers are meant to see this miniseries as the verses of a song, then Blood Origin is like a tune produced for the sole purpose of being danced to by TikTok tweens — vapid, corny, and once listened to, immediately forgettable.

One of its (many) discordant chords is its mind-boggling pacing; whoever brought up the idea to chop down this overly-ambitious tale into four parts needs to be removed from the table. And in keeping the tale overly ambitious, Blood Origin played the wrong note in the writing department as well, jamming a bunch of nothingness into its narrative. As such, viewers will have little time, if any, to get to know Blood Origin’s characters, or their motivations, and thus cannot fully comprehend the events that lead to the end of this middling melody (or what, exactly, it adds to grander Witcher experience).

Mass monster executions seemingly occur out of the blue; clans hate each other and have confusing allegiances to their regents for equally indiscernible reasons; everyone is starving outside of the castle’s walls and nobody bothers to explain why; and one Elf known as The Lark is a cross between Ariana Grande and Woody Guthrie, an obscenely popular superstar singing revolutionary ditties known and beloved by all — which is bizarre for, you know, a medieval dark-fantasy world with no radio stations.

All of this, and more, materializes over the course of a mostly humorless story that gets completely lost in itself. Audiences get to see these seven strangers actually bond and like each other and share deep secrets for a whopping 10 minutes before their friend group is torn completely apart by the show’s disorderly (and not in the fun way) third act. By the time the show’s juiciest bits are revealed, viewers are too weary to toss a coin to the first-ever Witcher.

This is a genuine shame, as the cast tried very hard to make this miniseries work, and had glimmers of on-screen chemistry. There were even some scene stealers — specifically Sophia Brown, Francesca Mills, Mirren Mack, and Lenny Henry, who suck you back into Blood Origin just when you’re ready to press stop. As for Michelle Yeoh, well, the stellar actress was, unfortunately, given a lame script that dampens her shine.

But possibly the worst of Blood Origin was its deviation from the story and the overall spirit of its canonical origins to haphazardly assemble a shallow, soulless prequel — a blatant cash-grab that show creators Lauren Schmidt-Hissrich and Declan de Barra should be ashamed of in a golden spinoff era of Andor, House of the Dragon, Better Call Saul, and Rings of Power.

Blood Origin is an indicator that Cavill was right to quit while he was ahead— walking away from The Continent with his dignity, as well as Geralt’s dignity, intact.

If Seasons 3 and 4 of The Witcher are going to stray from the heart of Sapkowski’s storytelling the same way that Blood Origin did in four dissatisfying episodes, then perhaps it’s time for us to quit while we’re ahead, too, and remember The Witcher for what it was — and what it could have been.

I’m no prophetess, but this prequel may have foreshadowed a bittersweet farewell to The Witcher that we once couldn’t stop buzzing about; The Witcher: Blood Origin is barely worth a hum.

“Remember me,” one Elf stubbornly declares in The Witcher: Blood Origin before she rips a dagger from her heart, bleeding herself out instead of staying humble. After having watched all four episodes of Netflix’s first live-action Witcher spinoff, it appears that this parting line may have been a meta-textual plea of desperation — a dying breath…

“Remember me,” one Elf stubbornly declares in The Witcher: Blood Origin before she rips a dagger from her heart, bleeding herself out instead of staying humble. After having watched all four episodes of Netflix’s first live-action Witcher spinoff, it appears that this parting line may have been a meta-textual plea of desperation — a dying breath…

34 years ago, a forgotten Nintendo masterpiece paved the way for Mario Kart

Ramattra is the franchise’s most important new hero in years