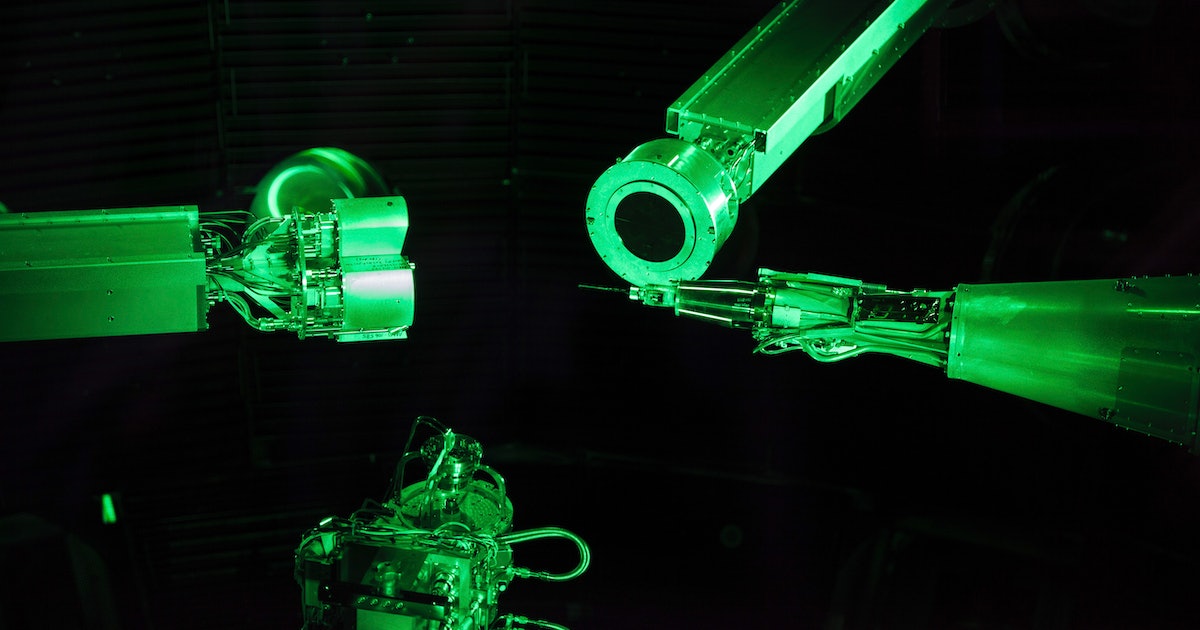 When will fusion energy be available? Here’s what 3 scientists predict

This past week, in a historic first, the team at the Lawrence Livermore National Laboratory’s National Ignition Facility announced that they managed to create a surplus of nuclear fusion energy by bombarding hydrogen isotopes with powerful lasers.

Now, scientists, clean energy advocates, and closely-following nerds around the world are wondering what’s next.

The biggest question is when will it help supply clean energy to our homes and businesses? In order for nuclear fusion energy — an emissions-free and potentially abundant source of power — to supply the country with electricity, we would need power plants to scale up production and provide a consistent stream of juice.

Months before scientists actually managed to achieve a net gain in fusion energy, the White House had already outlined a plan to get such a plant up and running within the next decade.

But is it possible? Well, it depends on who you ask. To paint a picture for our readers, Inverse talked to three nuclear fusion experts about the long path ahead toward power plants.

What advantage does nuclear fusion power have over other renewables?

You may be wondering how nuclear fusion power compares to sources like solar, wind, and geothermal. Unlike some of these forms of power, “it can be deployed where and when you need it,” says Troy Carter, a plasma physicist at the University of California, Los Angeles.

The ingredients can be sourced around the world: There’s lots of the hydrogen isotope deuterium in seawater and freshwater, and lithium from seawater can be used to make the isotope tritium. “Just looking at seawater, there is enough fusion fuel to power all of humanity’s needs for hundreds of thousands of years,” Carter adds.

Nuclear fusion plants could also operate more often compared to other forms of clean energy that depend on sunny or windy days to collect power.

Overall, though, all these renewables could complement each other to ensure an emissions-free future. “All solutions should be explored,” says Michael Cuneo, an electrical engineer at the Sandia National Laboratories in Albuquerque, New Mexico.

How do we ready the lasers for primetime?

At LLNL, the world’s most energetic laser blasted 192 beams at a gold cylinder containing a frozen pellet of the hydrogen isotopes deuterium and tritium. Then, the cylinder heated up to over 5 million degrees Fahrenheit and imploded, triggering a fusion reaction that generated tons of energy (3.15 MJ, the equivalent of about three sticks of dynamite).

Despite this impressive feat, the experiment relied on technology from the 1980s that is less than 1 percent efficient — meaning that 1 percent of the energy from the electric grid makes it into the laser beam, Carter says.

Today, lasers have efficiencies of 20 percent or higher, but they need to be adapted specifically for inertial fusion energy production, he adds.

And while the LLNL team reached a net energy gain of 1.5, that number needs to reach somewhere between 10 and 100 for an electricity-producing fusion power plant. “There is promise for this to happen as the record NIF shot only burned up a small fraction of the fusion fuel (less than 10 percent),” Carter explains. “If you can ignite more of the fuel, the gain can go up extremely quickly.”

Even with recent improvements in laser tech, a power plant would need some serious upgrades. A laser would need to shoot around 10 to 20 pulses per second, Cuneo says. Currently, the LLNL laser can only fire a few times a day.

But the recent achievement could kick off major improvements in the laser system, according to Carter.

“LLNL researchers have already demonstrated they are on a steep curve for fusion power output — optimizing the target and increasing the laser input energy (perhaps modestly) may send the gain shooting upward,” he says.

It could look somewhat similar to today’s nuclear power plants in terms of size and infrastructure, says Arianna Gleason, a scientist at the Department of Energy’s SLAC National Accelerator Laboratory. There, the process of nuclear fission forces uranium atoms to split apart and generate energy (essentially the opposite of nuclear fusion, which combines hydrogen isotopes).

Cuneo agrees that “fission power plants are at least in the ballpark of what to expect (cost, look, feel). They have all the basic components and have a nuclear island to provide the heat.”

It’s currently unclear whether power plants will rely on laser techniques or magnetic confinement, a process where devices use magnetic fields to trap hydrogen isotopes so that they warm up to the temperatures required to trigger fusion. LLNL Director Kim Budil noted in a recent press conference that this technology is further ahead in research and is perhaps closer to commercialization. Ultimately, though power plants could utilize some sort of combination of both.

Overall, a range of ideas is currently swirling around. “Some would say it likely has to be a larger size plant (around a GW of electricity capacity) but there are ideas out there for smaller-scale (down to 100MW electric or perhaps below) plants that startup ventures are pitching,” Carter says.

As for what these plants would actually power, Gleason says labs at the Department of Energy and at universities are focusing on developing sources of energy that can be widely used in electric grids.

Cuneo also thinks nuclear fusion energy should be sent to the grid. “If the entire transportation sector becomes electrified (to move away from fossil fuels as we should), electric generation capacity might need to triple,” he says. “Any growth in electrical generation capacity must be green and cannot be from fossil fuels — fusion is one option that must be developed.”

As for other specific uses, Carter notes that fusion power could be used to produce hydrogen, a fuel that could accelerate the transition toward electric vehicles.

How much will nuclear fusion power plants cost?

Future research and development could cost tens of billions of dollars, Gleason estimates.

So far, most nuclear fusion research has focused on scientific proof-of-concept work, and very little funding has been available to actually develop the technology involved, Cuneo says.

“It is difficult to be specific on the cost of a technology development program,” he says. “There are lots of problems to solve and technology to be developed and matured. The problems are also difficult, and they aren’t just engineering.”

Still, Carter points out, nuclear fusion must compete with the price of other types of energy, which means that both the private and public sectors need to invest for it to succeed. And in recent years, investors have poured nearly $5 billion into fusion startups.

This all begs the question: When can we get electricity from nuclear fusion plants? A White House plan announced this March will devote $50 million to fusion research in hopes of building a pilot plant in 10 years. But not everyone is convinced that this vision is realistic.

“Unfortunately, no, as history in fusion research shows. But this is just my opinion,” Cuneo says. “Ten years is very little time. It’s still a good vision to invest more in this technology (and others) to go faster.”

Even if things do work out on that timescale, it usually takes around 40 to 50 years to widely adopt a new source of energy, Cuneo says.

Carter is more optimistic about the 2032 deadline, and adds that recent scientific breakthroughs like the NIF result could put researchers in a position to deploy fusion quickly enough to mitigate the impacts of climate change.

“It will take hard work and innovation, but this is what we do in the U.S. — so I think it is possible to meet this goal and the fusion research community is ready to roll up our sleeves and make it happen,” Carter says.

This past week, in a historic first, the team at the Lawrence Livermore National Laboratory’s National Ignition Facility announced that they managed to create a surplus of nuclear fusion energy by bombarding hydrogen isotopes with powerful lasers. Now, scientists, clean energy advocates, and closely-following nerds around the world are wondering what’s next. The biggest question…

This past week, in a historic first, the team at the Lawrence Livermore National Laboratory’s National Ignition Facility announced that they managed to create a surplus of nuclear fusion energy by bombarding hydrogen isotopes with powerful lasers. Now, scientists, clean energy advocates, and closely-following nerds around the world are wondering what’s next. The biggest question…

Mission details and how to watch