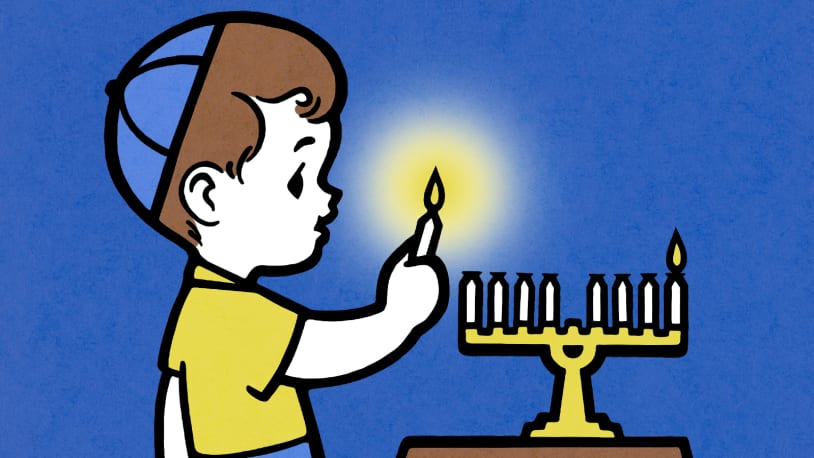 Hanukkah is likely the most ubiquitous and recognizable holiday in Judaism, with the menorah being a universal symbol of the season. Here’s everything you need to know about the Jewish Festival of Lights:

So how is it really supposed to be spelled?

This is a question without a definitive answer, as there are many ways to spell the name of the holiday. The word is derived from translated Hebrew that would phonetically be spelled “Hanuka,” though Jewish American publication The Forward noted that this transliteration is rarely seen in English.

Using English, the spelling that comes the closest to exacting the Hebrew transliteration is, in fact, Hanukkah, the publication adds. However, the spelling “Chanukah” — perhaps the second-most commonly seen iteration — is the most similar in pronunciation to how it’d be said in Hebrew. Part of the reason for the confusion is that Hebrew, unlike English, doesn’t use the Latin alphabet, meaning words are often subject to less-than-perfect translations.

Time reported that the reason most people may seem to prefer the spelling of “Hanukkah” is simple: It’s likely easier for non-Hebrew speakers to pronounce than “Chanukah,” notably because H and Ch sounds are often similar in English. The outlet noted that “Chanukah” was actually the top spelling for years before Hanukkah gradually began to take over online.

So which one is more right? Well, Brittanica says both of them are technically correct. Hanukkah is simply the most widely used, while Chanukah is more traditional. However, Brittanica notes that there are over 20 recorded spelling variations, including “Chanukka,” “Hannukah,” and even “Xanuka.”  So when it comes down to it, it’s really about personal preference.

How long is Hanukkah?

Hanukkah, or the Festival of Lights, celebrates the victory of the Jewish Maccabees over Syria’s brutally repressive Seleucid Empire in the 2nd century. As the story goes, a small army of Jews known as the Maccabees, led by the priest Judah, were able to recover their temple in Jerusalem from the Seleucid forces, who’d been using it to worship Zeus. The Maccabees rededicated the building as the Second Temple and decided to light oil lamps to illuminate the house of worship; though they only had enough oil to last a single night, the oil continued to burn in the temple for the next eight days.

“The word Hanukkah means ‘dedication,’ and commemorates the miracle of light that occurred when Judah rededicated the Temple to the Hebrew god,” National Geographic explained. Jews around the world today remember the miracle by saying a prayer and lighting a menorah — a nine-branched candelabra — once a night for eight days.

When does Hanukkah start? Why is it celebrated on different days each year?

In 2022, Hanukkah will start on Dec. 18 and will run for eight nights until Dec. 26. One other unique aspect of the holiday is that it changes dates almost every year. This is in line with other Jewish holidays, such as Rosh Hashanah and Yom Kippur, which don’t have fixed celebration dates. But why?

As a result of these differences, the dates on the Gregorian and Hebrew calendar don’t match up, so Hanukkah appears to start on a different day every year. However, in reality, it doesn’t: It always starts on the first day of Kislev, the ninth month of the Hebrew calendar.

What do Jewish people do for Hanukkah?

The menorah lighting is typically the centerpiece of the holiday. Even many secular Jews who don’t follow the religion closely, if at all, light a menorah during Hanukkah. Festive menorahs can be found in locations across the world, including many in storefronts, malls, and public gathering places that also throw Hanukkah parties. The White House also participates in a menorah lighting ceremony, often capped off by a party afterward. The ceremony in 2021 marked the first time that a spouse of a president or vice president was actually Jewish: second gentleman Doug Emhoff, the husband of Vice President Kamala Harris.

However, there is much more to Hanukkah than just the menorah lighting. Like all good holidays, Hanukkah is often filled with plenty of food, many of them tying into the holiday’s theme of oil. One of the most common dishes is latkes, also known as potato pancakes. Similar in some ways to hash browns and other fried potato dishes, latkes are often served with applesauce and are among the most popular Hanukkah dishes. Other notable Hanukkah dishes include sufganiyot, a traditional dessert similar to fried jelly donuts, and rugelach, another staple Jewish confection.

There is more than just good food during Hanukkah, though, especially when it comes to children. Kids often play with dreidels, a traditional spinning top with each side displaying a different Hebrew letter. The winner of the game often receives a Hanukkah gelt. While originally used to refer to actual money given during the holiday, gelt has now come to refer to Hanukkah-themed chocolate coins.

In addition to games, children often look forward to Hanukkah because parents traditionally provide them with eight nights of presents. There is actually a significant history behind this, as Jonathan Sarna, a professor of American Jewish history, told the website My Jewish Learning: While gifts were typically only given on Purim, another Jewish holiday, the Jewish custom of giving gifts gradually shifted to Hanukkah to match presents received by Christians during the Christmas holiday, Sarna said.

Are there actually any Hanukkah songs?

Compiling a full list of Christmas songs would almost be impossible, as there are literally hundreds of them. But what about Hanukkah? For all the pageantry of the holiday, why are there no Hanukkah songs?

Well, it turns out, there are actually quite a few. The Forward compiled a list of the most notable tunes related to Hanukkah, the most recognizable of which is likely “Hanukkah, Oh Hanukkah,” a traditional Jewish song originally written and sung in Yiddish. Another notable song is “I Have A Little Dreidel,” which celebrates one of the holiday’s aforementioned pastimes.

There are a number of other Hanukkah-inspired songs: Peter, Paul, and Mary released the folk song “Light One Candle” in 1982, and it has gone on to become another Hanukkah classic. “Judah and the Maccabees” is yet another well-known jam, a similarly folksy song.

There is also another tune that has become an iconic part of the Jewish lexicon: Adam Sandler’s “The Chanukah Song.” First released by Sandler in 1994 when he was a member of Saturday Night Live, the song is a comedic compilation of, as Sandler says, “people who are Jewish, just like you and me!” The song proved so popular that Sandler has released three additional versions over the years.

While they may not be well-known as most Christmas songs, these Hanukkah tunes, like many other aspects of the holiday, are an important part of what makes the Festival of Lights a special occasion.

December 18, 2022 December 18, 2022 Hanukkah is likely the most ubiquitous and recognizable holiday in Judaism, with the menorah being a universal symbol of the season. Here’s everything you need to know about the Jewish Festival of Lights: So how is it really supposed to be spelled?  This is a question without a definitive answer, as…

December 18, 2022 December 18, 2022 Hanukkah is likely the most ubiquitous and recognizable holiday in Judaism, with the menorah being a universal symbol of the season. Here’s everything you need to know about the Jewish Festival of Lights: So how is it really supposed to be spelled?  This is a question without a definitive answer, as…

Back to the moon … and beyond