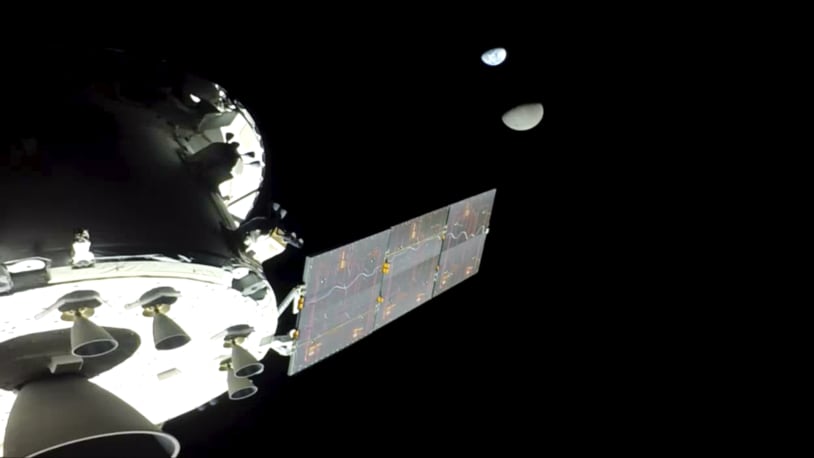 Back to the moon … and beyond

The Artemis Orion spacecraft completed a trip around the moon this week. What does NASA have planned next? Here’s everything you need to know:

Why return to the moon?

NASA wants to establish a manned base there, as a stepping stone to Mars. The Apollo program that put the first humans on the moon in 1969 was mostly about winning the space race with the Soviet Union. The new moon program, called Artemis, will replicate Apollo in landing astronauts on the lunar surface and bringing them safely back home, but then the program continues, with the goal of establishing a continual human presence on the moon. NASA plans to build a space station that orbits the moon and a base camp on its surface, all fueled by small nuclear reactors. Part of the goal is to mine the moon’s minerals, but the bigger aim is to set it up as a way station to test whether humans can safely live in space for the months it would take to send them to Mars. “The real goal is Mars,” said astronaut Steven Swanson. “We will use the moon as a test bed.” The first step in that goal, Artemis 1, was a resounding success.

What did Artemis 1 do?

The new Space Launch System (SLS) rocket blasted the Orion capsule into space on Nov. 16. During its 42-day journey, Orion carried three “manikins” — high-tech models of humans loaded with sensors — into a lunar orbit, fired its thrusters to escape lunar gravity, and returned safely to Earth with a splashdown in the Pacific. One manikin, Moonikin Campos, measured how bumpy the ride would be, while two others, Zohar and Helga, were set up to test how women’s bodies would react to the radiation in space. Many other tests were also conducted.

Artemis 2, planned for 2024, will repeat the first mission but with human beings on board. One of the crew will be a Canadian, as Artemis is a multinational effort. The crewed capsule will loop a wide orbit around the moon, reaching 4,600 miles beyond the far side, the farthest out in space that humans have ever been. Artemis 3, ambitiously scheduled for 2025, will send four astronauts to the moon and land two of them — including the first woman and the first person of color — on the surface for the first time since 1972. While the Apollo astronauts landed near the moon’s equator, Artemis astronauts will explore its South Pole, which features steep mountains as well as deep crevices that hold water ice. After that, the plan is for an SLS rocket to go to the moon about once a year, allowing astronauts to assemble an orbital space station and then, by the early 2030s, a surface habitat in which astronauts can live for a week at a time.

How much does this cost?

At least $93 billion through 2025, which is far more than planned. The SLS rocket is NASA’s most powerful ever, taller than the Statue of Liberty and capable of carrying 27 tons of cargo. But it took more than a decade to make and cost more than $20 billion to develop, more than twice its budget. Aerospace expert Wendy Whitman Cobb told Vox that Congress tolerated the budget overruns because Artemis “has kept the money and jobs flowing to key congressional districts.” Each SLS can only be used once, making them inefficient and costly. By contrast, the super-heavy launch vehicle Starship, which Elon Musk’s SpaceX is building for NASA to use as the lunar landing vehicle, is reusable.

What is the role of SpaceX?

SpaceX beat out Jeff Bezos’ Blue Origin company to provide the lunar lander for Artemis 3 under a contract worth nearly $3 billion. The Starship Human Landing System will ferry the astronauts from their Orion capsule in orbit around the moon down to the surface. SpaceX envisions a craft like the old space shuttle that will eventually travel back and forth from either Orion capsules or the Gateway lunar space station to the surface. But Starship hasn’t been tested yet — and SpaceX hasn’t said why it’s been delayed. If SpaceX can’t deliver on time, Artemis 3 will be postponed.

Who else is going to the moon?

America’s geopolitical rivals. Last year, China struck a deal with Russia to cooperate in building their own joint lunar base. China first landed a rover on the moon in 2013. It plans three more unmanned missions over the next decade, with a goal of landing taikonauts on the surface in the 2030s. There’s already bad blood between the U.S. and China, as NASA Administrator Bill Nelson has accused China of stealing U.S. technology, and both countries are planning bases at the South Pole. Meanwhile, Blue Origin and SpaceX will send their own missions, separate from NASA’s. “It would be tragic for Neil Armstrong’s boot prints to be erased, either inadvertently or maliciously, because of all these activities on the moon,” space-law expert Michelle Hanlon told Vox. “It’s going to get very crowded very soon.”

Competition over the moon

NASA is partnering with the space agencies of Canada, the EU, and Japan to build the lunar space station, and the U.S. has taken the lead on establishing a legal framework for international lunar cooperation. NASA and the U.S. State Department together wrote the Artemis Accords, whose signatories agree to respect safety zones around other nations’ lunar activities and recognize the right to “extraction and utilization” of ores. In the past two years, 21 countries have signed that pact — but crucially, China and Russia have not and refuse to be bound by its rules. They condemned the pact as colonialist, saying it paves the way for the U.S. to loot the moon before other countries can get there. “The biggest risk is you have two opposite sets of rules,” Australian defense expert Malcolm Davis told Bloomberg. “You could have a Chinese company on the moon in the 2030s claiming territory with a resource on it, in the same way the Chinese have claimed the entire South China Sea.”

The Artemis Orion spacecraft completed a trip around the moon this week. What does NASA have planned next? Here’s everything you need to know: Why return to the moon? NASA wants to establish a manned base there, as a stepping stone to Mars. The Apollo program that put the first humans on the moon in 1969…

The Artemis Orion spacecraft completed a trip around the moon this week. What does NASA have planned next? Here’s everything you need to know: Why return to the moon? NASA wants to establish a manned base there, as a stepping stone to Mars. The Apollo program that put the first humans on the moon in 1969…

Is time real? | The Week