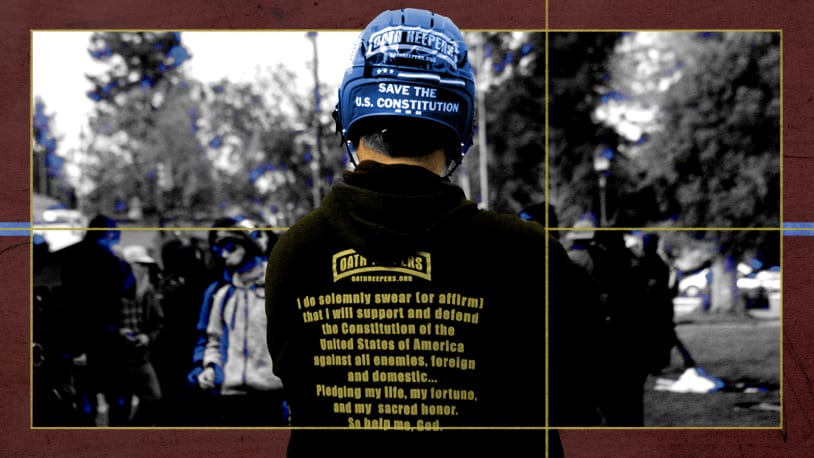 They are described by the Anti-Defamation League as “a large but loosely organized collection of right-wing anti-government extremists who are part of the militia movement.” The group claims to have tens of thousands of members across the country and has notably directed most of its recruiting efforts toward people in public safety positions who tend to lean conservative. This includes targeting military and veterans’ groups, police officers, and other law enforcement divisions, as opposed to other far-right groups who tend to target a general audience.

The Southern Poverty Law Center further describes the Oath Keepers as “often confrontational,” noting that they have been involved in a number of armed standoffs involving the government. While the most notable of these remains the Jan. 6 attack on the U.S. Capitol, they reportedly have a long history of involving themselves in vigilante justice. This includes attendance at racially charged events, with NBC News reporting a number of armed Oath Keepers turned up at the 2015 protests in Ferguson, Missouri.

Beyond this, members of the Oath Keepers have reportedly participated in a variety of other far-right movements, including the “Stop the Steal” campaign associated with efforts to overturn the 2020 presidential election. They are also proponents of the sovereign citizen movement, believing that they are not subject to any laws of the U.S. government.

What else do they believe?

A wide variety of conspiracy theories and fringe beliefs. The ADL has summarized the Oath Keepers’ main points, noting the group mainly adheres to a general anti-government plan. The driving theory behind the Oath Keepers is that the federal government has been overtaken by a mass liberal conspiracy in an effort to strip Americans of their rights. The ADL noted that the Oath Keepers have adhered to the general tenets of the militia movement, and believe the goal of this conspiracy is to form a tyrannical New World Order to enslave Americans.

As the Oath Keepers believe the New World Order will eventually take over, the ADL reports that they ask their members to disobey any orders they see as unconstitutional. This includes conspiracy theories involving the confiscation of Americans’ guns and rounding people up into concentration camps. The Oath Keepers believe that the military and law enforcement members of their group will eventually stop the New World Order.

The Center for Strategic and International Studies has additionally outlined a large swath of the Oath Keepers’ agenda. Most of this is derived from the Oath Keepers’ list of 10 laws or mandates titled, “Declaration Of Orders We Will Not Obey.” This includes disobeying any law that would “disarm the American people,” any efforts to impose martial law, any orders to invade a state that “asserts its sovereignty,” any efforts to confiscate property from Americans, and more.

The majority of these conspiracies, including the existence of a New World Order, have been debunked.

How did the Oath Keepers get started?

The group was founded by Stewart Rhodes, a Yale Law School graduate who had previously clerked on the Arizona Supreme Court. However, those who knew him said he soon started using his time at the court to express his disillusioned views and complain of government overreach, The Associated Press writes in its history of the group.

Rhodes “saw this titanic struggle between people like him who wanted individual liberty and the government that would try to take away that liberty,” Matt Parry, who clerked alongside Rhodes, told AP. Rhodes eventually left his job at the court and began looking toward forming an anti-government movement. He would go on to start the Oath Keepers group in 2009 in Lexington, Massachusetts — the site of the first battle of the American Revolutionary War.

While Rhodes reportedly framed the early days of the Oath Keepers as “just a pro-Constitution group made up of patriots,” he would eventually help the group evolve into what it is today. Their first major showdown with the government occurred in 2011 in the town of Quartzsite, Arizona. They would eventually form “community preparedness teams” to monitor anti-government sentiments across the country.

Simply put: because many of them were reportedly there. Following the 2020 election, in which former President Donald Trump lost to President Biden, the Oath Keepers began working on a weeks-long campaign to have the election overturned. This eventually led to a number of Oath Keepers, including Rhodes, allegedly participating in the attack on the U.S. Capitol on Jan. 6, 2021.

At least 20 members of the group were eventually accused of conspiring to block President Biden’s election certification, including Rhodes and four of his top associates. Members of the group were also indicted by the House Select Committee investigating Jan. 6. Eventually, 10 Oath Keepers, including Rhodes, were indicted on seditious conspiracy charges.

A large part of Rhodes’ and the Oath Keepers’ defense was that they believed the attack on the Capitol was based on eventual orders from former President Trump. As a result, Rhodes argued, the Oath Keepers could not be found guilty because they were simply following their president’s orders.

However, there were no such orders from Trump, and this defense from the Oath Keepers was swiftly rebuked in court, eventually leading to Rhodes and four others’ guilty verdict.

What will the group do next?

The head of their group is not escaping justice — that much is certain. But it remains to be seen what the effects will be of putting Rhodes behind bars.

Shane Burley, the author of Fascism Today: What It Is and How to End It, wrote for NBC News that the outcome of the trial was undoubtedly “a net benefit” for democracy. However, the outlet also noted that the tactics of the Oath Keepers were constantly shifting in an effort to evade law enforcement. Tied into the fact that conspiracy theories and the far-right movement have become more mainstream in the past few years, and it is unlikely that the Oath Keepers will disappear, even without their leader.

“Even if the most extreme actors are eliminated, the consequences of their ideas could remain,” Burley added. “While legal methods like lawsuits have proven effective, and prosecutions have dismantled some of the most dangerous far-right terrorist groups, the effort to fully unseat the rise of white nationalism will only come from a mass wave of organized resistance.”

What’s behind the deadly strep A outbreak in the U.K.?