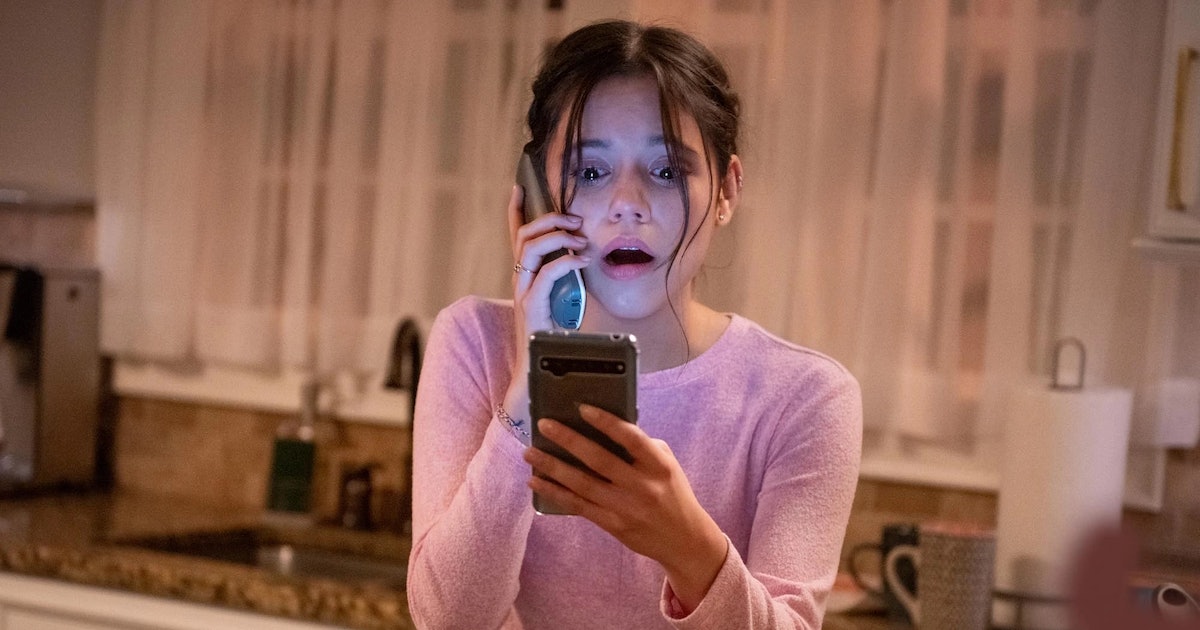 It’s been a great year for horror.

Films like Smile and Terrifier 2 smashed expectations at the box office. Ti West shocked fans with a surprise follow-up to his slasher hit X, turning Pearl into another showcase for rising genre star Mia Goth. But if anyone can be said to have ruled 2022 in the horror sphere, though, it’s the year’s indisputable scream queen Jenna Ortega.

The young actress appeared in four horror features this year (including X) and starred in Netflix’s spooky hit series Wednesday. Between carrying existing franchises on her back and experimenting with different shades of horror within the genre, Ortega became 2022’s reigning horror champion.

Ortega started the year off with Scream, the “requel” to Wes Craven’s beloved meta slasher. While Scream is known for continually reinventing itself, what Ortega accomplishes in this film is still so unique to the series that it deserves special mention. She gets the coveted opening scene, which typically features the movie’s most iconic kills (think Drew Barrymore’s Psycho bait-and-switch and Jada Pinkett Smith’s movie theater primal scream). Unlike those famous scream queens, however, Ortega survives her film. She gets the iconic opening scene and she gets to be the Final Girl. Even in the Scream franchise, that’s unheard of. For that dual distinction alone, Ortega would have earned her 2022 horror crown.

Ortega continued her horror streak with Studio 666, a delightful surprise of a film from The Foo Fighters about the rock band recording a new album in a cursed house. Ortega’s role is much smaller here, but she still makes the most of it, showing off her incredible scream and her ability to be just as creepy as any horror villain. Ortega plays Skye Willow, a member of the legendary fictional band Dream Widow, who gets murdered by her lead singer. (Interestingly, Ortega gets dragged by her legs along a bloody floor in three of her 2022 films but she manages to give her terror in each scene a different flavor.) At the end of the film, Skye returns as a vengeful spirit, complete with sunken eyes and spooky powers. Ortega’s deadpan retribution would return in a big way in the series Wednesday.

The two roles that followed — Camila Montes in American Carnage and Lorraine Day in X — couldn’t be more different. Camila is an acerbic activist detained by the U.S. government for being the child of an undocumented person, who is just as tough physically as she is mentally. When Camila and her friends discover an even more sinister plan afoot at the work camp they’re sent to, Ortega taps into an action-thriller mode that suggests even further depths in her acting arsenal.

Ortega excels at externalizing deep inner emotions, even when she’s playing reserved characters like Wednesday Addams. The actress emerges as a star in Wednesday, finding every bit of wicked humor and buried emotion in the famously deadpan character. She keeps control of her expressive eyes and mouth at every turn, and when she lets a grin escape or allows a bit of emotion into her wide eyes, it tells you more about Wednesday’s complex inner life than any amount of dialogue could.

Though scream queens go back as far as cinema itself, the most famous is likely Jamie Lee Curtis, who debuted in John Carpenter’s Halloween and went on to star in horror classics like Prom Night, Terror Train, and The Fog. Curtis set the standard for the scream queen: a woman who stars in horror films, whose character usually survives until the end, and who can shriek in horror like nobody’s business.

With five different horror vehicles in 2022, Ortega has expanded the definition of the scream queen. She’s been the red herring and the Final Girl, even within the same movie. She’s been killed in gloriously bloody ways and she’s survived to defeat the killer. The only constant? Ortega always did it with style and a new twist on the genre.

Jenna Ortega’s versatility, talent, and personality shine through in every role. With the breadth and depth of her projects — and her outstanding scream — she proved that she’s 2022’s ultimate Scream Queen.

It’s been a great year for horror. Films like Smile and Terrifier 2 smashed expectations at the box office. Ti West shocked fans with a surprise follow-up to his slasher hit X, turning Pearl into another showcase for rising genre star Mia Goth. But if anyone can be said to have ruled 2022 in the…

It’s been a great year for horror. Films like Smile and Terrifier 2 smashed expectations at the box office. Ti West shocked fans with a surprise follow-up to his slasher hit X, turning Pearl into another showcase for rising genre star Mia Goth. But if anyone can be said to have ruled 2022 in the…