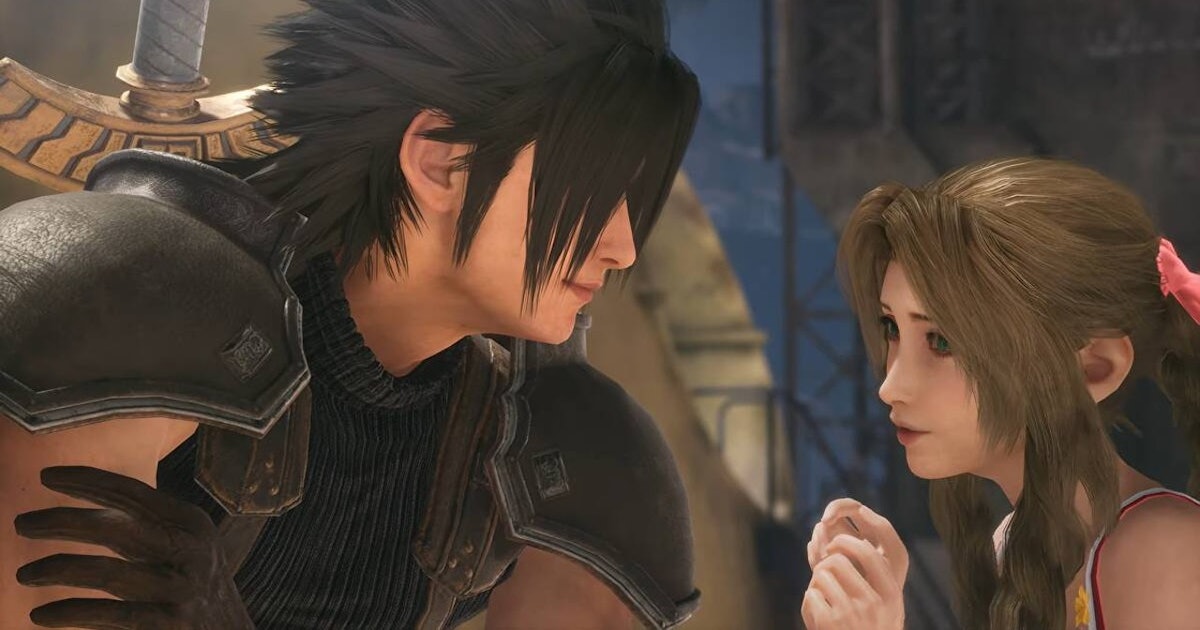 Final Fantasy VII features some of the most beloved characters in video game history, and a key part of that has always been the dynamic love triangle of Cloud, Tifa, and Aerith. For decades fans have had differing opinions on who’s a better fit for Cloud, but the spinoff Crisis Core, first released on PSP in 2007, pretty eloquently puts that debate to bed. A core focus in the prequel’s story is the budding romance between Zack Fair and Aerith, and Crisis Core Reunion makes that relationship more heartwarming — and heartbreaking — than ever before. As a warning, there will be some spoilers ahead for Crisis Core.

It’s likely many fans aren’t very familiar with Crisis Core, as the game never saw a release outside of the PSP, and never even saw a digital release at that. This prequel begins seven years before the events of Final Fantasy 7, and following SOLDIER 2nd-class Zack Fair.

Who would you rather date: Cloud or Zack? Let us know!

As it turns out, Zack is a vitally important character to the overall narrative of Final Fantasy 7, and partway through the game he falls through the roof of a church and is woken up by Aerith, which probably sounds familiar. Zack is immediately smitten with her. As a reward for saving him, he promises one date together.

The original Final Fantasy 7 had some vague references to Aerith’s past boyfriend that was in SOLDIER, but Crisis Core quickly makes a case for the “Zerith” ship as one of the best romances in the entire franchise.

That first “date” between the pair is filled with overwhelmingly cute scenes, as Zack buys Aerith her iconic pink ribbon, works with her to stop a pickpocket, and talks to townspeople who comment on “what a cute couple they make.” It essentially feels like the video game equivalent of a meet-cute, but their relationship grows so much more complex in the hours after that.

Aerith becomes Zack’s sole source of solace in the face of all the terrible things he endures. As his faith in Shinra crumbles, he feels like the foundations of his entire life is also crumbling. Aerith is the one constant he can rely on. Some excellent writing in Crisis Core creates scintillating chemistry between the two, and it’s a blast to see their dynamic grow and change — particularly in this remastered version of the game.

One particularly poignant scene takes place after Zack loses a comrade in battle and breaks down in tears in the church. Without words, Aerith simply throws her arms around Zack, and the two sit there in quiet silence.

Both of these characters are people bound by their fate with obligations and destinies that lie apart. However genuine their relationship feels, these two are star-crossed lovers for sure. There’s also another side to all this, of course, considering how close Cloud and Aerith become years after Crisis Core.

Zack’s relationship with Aerith doesn’t negate any feelings Aerith could have had for Cloud per se, but rather gives it all a new dimension. Aerith initially sees so much of Zack in Cloud, which is where the initial attraction comes from, but the events of Final Fantasy VII Remake show that the two are already growing to understand each other on a more personal level.

Because Crisis Core is a prequel, we know Zack is going to be killed by Shinra, but the absolutely superb ending of the game puts a heart-breaking bow on Zack and Aerith’s romance.

After waking up in the Shinra mansion and escaping, Zack eventually learns he’s been asleep for four years, and in that time Aerith has sent him 89 letters. Zack rushes to Midgar to reunite with Aerith, but a legion of Shinra troops stands in his way.

The final battle of Crisis Core is a brilliant moment where all the gameplay mechanics come together to support the narrative. As Zack hacks down dozens of Shinra troops, the DMW slot system starts to break down, and the people important to Zack, like Cissnei and Sephiroth, fade from his mind. Ultimately, the only figure left in the DMW is Aerith because she’s the only thing Zack’s mind and emotions can focus on. As gunfire continues to riddle Zack’s body, the DMW completely gets stuck on the image of Aerith and the screen fades to black.

The Final Fantasy franchise has no shortage of complex romances, but Aerith and Zack remain one of the most charming. Across the dozen or so hours of the Crisis Core playtime, you really get a sense that these two are perfect for each other. Chemistry aside, their personalities simply synergize so well. It’s what makes Crisis Core’s story so heartbreaking, and what makes Zack’s potential return in Final Fantasy VII Rebirth so enticing.

Subscribe to Inverse Daily for more stories about games, science, and entertainment that you won’t find anywhere else.

Final Fantasy VII features some of the most beloved characters in video game history, and a key part of that has always been the dynamic love triangle of Cloud, Tifa, and Aerith. For decades fans have had differing opinions on who’s a better fit for Cloud, but the spinoff Crisis Core, first released on PSP…

Final Fantasy VII features some of the most beloved characters in video game history, and a key part of that has always been the dynamic love triangle of Cloud, Tifa, and Aerith. For decades fans have had differing opinions on who’s a better fit for Cloud, but the spinoff Crisis Core, first released on PSP…