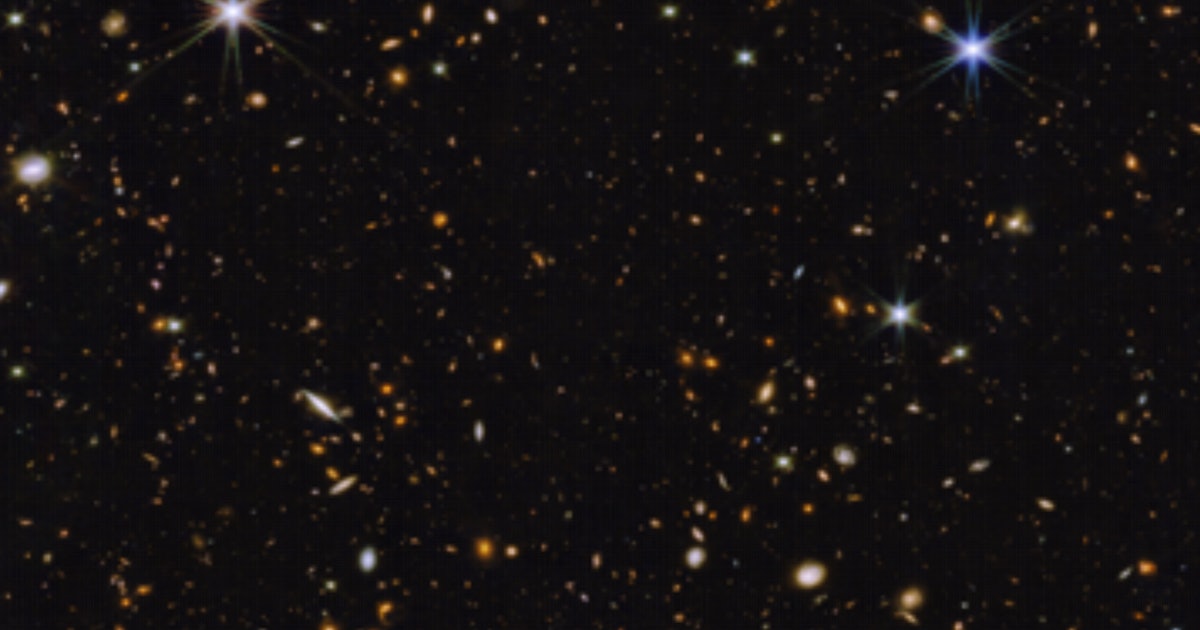 Webb captures 13.5 billion-year-old galaxies in a swath of northern sky

Picture the full Moon in the night sky; now imagine a tiny patch of sky about 2 percent that size, and imagine staring deep into it with the most powerful infrared telescope ever built until you can see the faint, distant light of the universe as it looked 13.5 billion years ago.

That’s exactly what you can see in the latest image from NASA’s James Webb Space Telescope.

What’s New – The image is just part of the data Webb has gathered so far for the Prime Extragalactic Areas for Reionization and Lensing Science (PEARLS) research program. PEARLS aims to study some of the oldest, most distant galaxies in the universe to learn when and how the first stars and galaxies formed. To accomplish that goal, the project’s scientists are focusing Webb’s powerful instruments on one tiny sliver of sky in the direction of the constellation Draco.

“To catch a glimpse of very rare galaxies at the dawn of cosmic time, we need deep imaging over a large area,” says Space Telescope Science Institute (STScI) astronomer Anton Kaekemoer in a recent statement. The faintest, oldest, farthest-away galaxies in this image are about a billion times fainter than the unaided human eye can see, going back to just 300,000 years after the Big Bang. Technically, Webb’s operators describe that as “medium-deep,” which may actually be the ultimate humblebrag.

And although 2 percent of the area covered by the full Moon sounds like just a tiny sliver of sky, it’s a pretty big area for one telescope to image in such depth and detail. Packed into that area are thousands of galaxies, including many that no one has ever seen before. All of that light, according to Arizona State University astronomer Rosalia O’Brien, is “encoding the history of the universe.”

“There are many objects that I never thought we would actually be able to see, including individual globular clusters around distant elliptical galaxies, knots of star formation within spiral galaxies, and thousands of faint galaxies in the background,” says Arizona State University astronomer Jake Summers in a recent statement.

Digging Into The Details – This image is a combination of 8 different “colors” of infrared light seen with Webb’s Near Infrared Camera (NIRCam) instrument, combined with three visible and ultraviolet filters from NASA’s Hubble Space Telescope (because Hubble is still extremely cool, darn it). Webb’s Near-Infrared Imager and Slitless Spectrograph (NIRISS) also captured the spectra of light coming from objects in the image, which will help PEARLS astronomers measure the distance to those ancient galaxies.

What you’re seeing here is an area called the North Ecliptic Pole. Astronomers need a frame of reference when they’re trying to describe where things are in space, so they’ve agreed to use the ecliptic (the plane in which Earth orbits the Sun) as the space equator. If you draw a line through Earth directly perpendicular to the ecliptic plane, it passes through the middle of the constellation Draco. That’s the North Ecliptic Pole.

Fun fact: The North Ecliptic Pole isn’t the same thing as the Celestial North Pole, which is the familiar “North Star,” Polaris. All the stars in the night sky appear to slowly turn around Polaris as our planet rotates. But because Earth’s axis is tilted, Celestial North and Ecliptic North don’t line up.

What’s Next – When the project’s observations are finished, this “medium-deep” field will be about four times its current size, or 8 percent the size of the full Moon.

“I hope that this field will be monitored throughout the Webb mission to reveal objects that move, vary in brightness, or briefly flare up,” says Arizona State University astronomer Rolf Jansen in a recent statement. Watching for objects that change over time could reveal things like distant supernovae or flares of light from material falling into active supermassive black holes.

Picture the full Moon in the night sky; now imagine a tiny patch of sky about 2 percent that size, and imagine staring deep into it with the most powerful infrared telescope ever built until you can see the faint, distant light of the universe as it looked 13.5 billion years ago. That’s exactly what…

Picture the full Moon in the night sky; now imagine a tiny patch of sky about 2 percent that size, and imagine staring deep into it with the most powerful infrared telescope ever built until you can see the faint, distant light of the universe as it looked 13.5 billion years ago. That’s exactly what…

Orion splashdown and more: Understand the world through 7 images