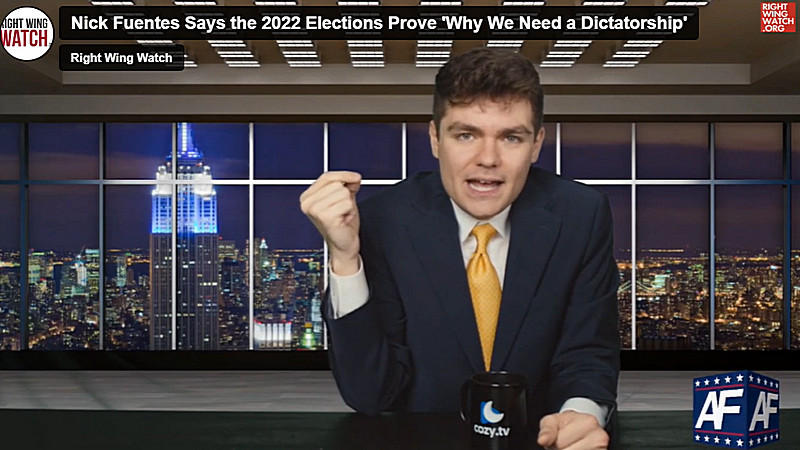 ‘A Fire Alarm System for the Whole Country’: Highlights of Right Wing Watch Impact in 2022

When news broke over the Thanksgiving weekend that former President Donald Trump had just had dinner with Kanye West—under fire for his increasingly vocal antisemitism—and lesser-known white nationalist Nick Fuentes, national media outlets seeking credible information on Fuentes turned to Right Wing Watch. Right Wing Watch had broken the news that Fuentes was traveling with Ye on the day he was scheduled to meet Trump at Mar-a-Lago. Over that weekend, Right Wing Watch, which began covering Fuentes five years ago, released videos from our archives documenting Fuentes’s far-right extremism. Right Wing Watch also covered the now-notorious appearance by Ye and Fuentes on Alex Jones’ “InfoWars” show, where Ye and Fuentes expressed their admiration for Adolf Hitler.

MSNBC’s Rachel Maddow recognized the importance of Right Wing Watch’s reporting on her Nov. 28 broadcast, calling Right Wing Watch “a fire alarm system for the whole country” and praising People For the American Way for this “great public service.”

In less than a week, more than 100 media stories cited Right Wing Watch as a source of information on Fuentes and his racism, antisemitism, misogyny, Christian nationalism, and hostility to democracy itself. Many media outlets criticized national Republican leaders’ reluctance to criticize Trump’s dinner. That media coverage put pressure on far-right politicians who have aligned themselves with Fuentes, like Rep. Marjorie Taylor Greene; when she announced that “of course” she denounced Fuentes and his bigotry, Right Wing Watch reminded the world that she had enthusiastically spoken at Fuentes’s white nationalist America First Political Action conference earlier this year and had been unapologetic in her support of Fuentes.

Documenting the Assault on American Democracy

The House Select Committee to Investigate the January 6th Attack on the United States Capitol performed an essential truth-telling service this year by documenting the breadth and depth of the attempts to overturn the election. Those efforts culminated in a failed attempt to prevent congressional affirmation of Joe Biden’s victory via a violent attack on the Capitol on Jan. 6, 2021, and the failed attempt by some Republican lawmakers to reject the Electoral College votes of battleground states that Trump falsely claimed to have won. Right Wing Watch research and reporting on these same efforts—including threats of bloody civil war from Oath Keepers’ founder Stewart Rhodes—provided the committee with valuable primary source material that was cited in at least one committee subpoena and shown during the committee’s public hearings.

The Jan. 6 committee just shared a video captured by Right Wing Watch in December 2020 in which Stewart Rhodes of the Oath Keepers threatened a “bloody war” if Trump was removed from office. #Jan6thHearings https://t.co/SVL1WmhFRr pic.twitter.com/F7vAlUrm5L

Even before the 2020 presidential election, Right Wing Watch had warned about increasing threats of violence from Trump’s political supporters. When Trump and his allies responded to his defeat by launching an all-out effort to overturn the election, Right Wing Watch extensively covered so-called “Stop the Steal” rallies and the Trump team’s legal and political efforts to defy the Constitution, overturn the results, and keep Trump in power. Right Wing Watch documented calls for violence at a Washington, D.C., rally the day before the insurrection.

Right Wing Watch researchers also documented the extent to which Trump’s dominionist religious-right allies participated in spreading his lies about the election and promoted his efforts to hold onto power unconstitutionally. Our work was cited a dozen times in “Christian Nationalism and the January 6, 2021 Insurrection,” a major report released earlier this year by Christians Against Christian Nationalism and allied groups.

As the Jan. 6 committee’s public hearings focused attention on the criminal conspiracy theory to overturn the election, Right Wing Watch released video explainers about some key players like the Oath Keepers—whose leader Stewart Rhodes has been convicted on seditious conspiracy charges—and reminded Americans about the role played by Christian nationalist ideology in fomenting the insurrection. Right Wing Watch also followed up many of the public hearings by publishing analyses of the day’s revelations.

Right Wing Watch also added to the committee’s work by providing additional context and analysis. For example, committee Vice Chair Rep. Liz Cheney cited an email sent by a Republican lawyer to document the extent of the campaign to pressure Vice President Mike Pence to abandon his constitutional duty to oversee a smooth transfer of power during congressional affirmation of the Electoral College results. Right Wing Watch recognized the author of the email and explained that the email was further evidence of the extent to which officials associated with the religious-right Family Research Council were involved in the plot to keep Trump in power.

In addition, Right Wing Watch researchers briefed progressive activists in a series of online sessions hosted by coalition organizations to promote grassroots activism designed to urge local public officials to demand accountability for those responsible for attacks on American democracy.

Right Wing Watch provided an early warning system on some of the most far-right candidates running for state and national office this year, educating journalists and ensuring that campaign coverage helped voters understand that dangerous extremism was on the ballot.

Right Wing Watch began covering Christian nationalist Pennsylvania state Sen. Doug Mastriano well before he became the Republican nominee for governor—even before he entered the race. Mastriano was a major promoter of Trump’s false stolen-election claims in Pennsylvania and used campaign funds to bus supporters to the U.S. Capitol on Jan. 6, 2021.

This April, Right Wing Watch broke the story about Mastriano’s appearance at a “Patriots Arise” conference organized by QAnon conspiracy theorists Alan and Francine Fosdick, who awarded Mastriano a “sword of David.” Mastriano told the crowd that he would be elected governor because “my God will make it so.” Right Wing Watch also documented Mastriano’s ties to antisemitism promoter Andrew Torba of Gab, dominionist Lance Wallnau, and a conspiracy-promoting road show led by businessman Clay Clark and former Trump adviser Michael Flynn.

Right Wing Watch’s reporting on Mastriano was cited or used by hundreds of editorials and news stories, including those in national outlets like the New York Times and major Pennsylvania outlets like the Philadelphia Inquirer.

Another candidate whose extremism had long been documented by Right Wing Watch was Michael Peroutka, a neo-Confederate and Christian nationalist with far-right views about the U.S. Constitution, who was chosen by Maryland Republicans as their candidate for state attorney general. As Right Wing Watch noted at the time, it was outrageous to imagine Peroutka as the state’s chief law enforcement officer given that “Peroutka declared in 2014 that the Maryland General Assembly was no longer a legitimate governing body because its support for marriage equality violated God’s law, and that therefore none of the laws it passed were ‘legally valid and legally enforceable.’”

When Peroutka won the GOP nomination, news outlets from Vice to the Washington Post turned to Right Wing Watch and its years of covering Peroutka’s extremism. The Washington Post linked to our coverage of Peroutka leading the crowd in Dixie.

Right Wing Watch is an essential and trusted source for national media covering threats to pluralism and democracy, including Trumpism, Christian nationalism, white nationalism, antisemitism, anti-LGBTQ bigotry, election denialism, QAnon, and other conspiracy theories. In addition, Right Wing Watch is frequently cited by other right-wing researchers and scholars whose work focuses on far-right extremism, Christian nationalism, and more. Our work reaches reporters, progressive activists, and the general public through media coverage, interview with print and broadcast journalists, and through our social media channels. Right Wing Watch videos logged more than 1.1 million views on YouTube in 2022, and about 200 million impressions on Twitter, where Right Wing Watch has more than 362,000 followers.

We need your help. Every day, Right Wing Watch exposes extremism to help the public, activists, and journalists understand the strategies and tactics of anti-democratic forces—and respond to an increasingly aggressive and authoritarian far-right movement. The threat is growing, but our resources are not. Any size contribution—or a small monthly donation—will help us continue our work and become more effective at disrupting the ideologies, people, and organizations that threaten our freedom and democracy. Please make an investment in Right Wing Watch’s defense of the values we share.