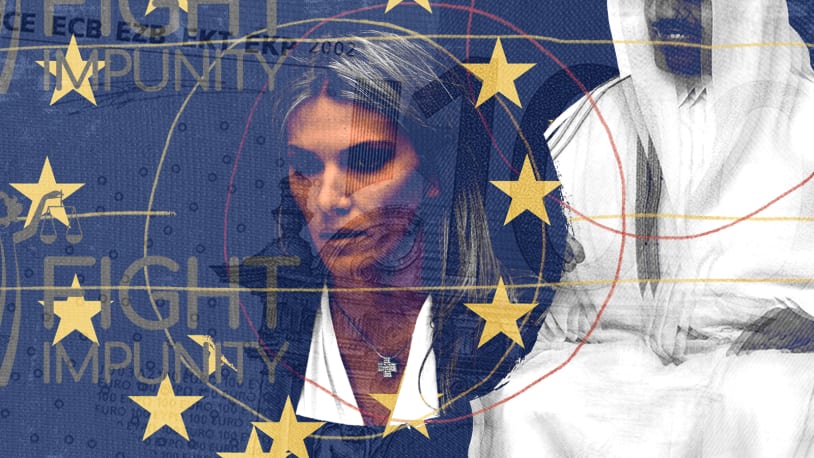 The European Union is embroiled in a scandal involving alleged influence peddling through a European Parliament vice president, literal bags of cash, a nonprofit organization called Fight Impunity, and a “Gulf State” widely reported to be Qatar, host of the 2022 FIFA World Cup. Nothing less than “Europe’s credibility is at stake” in the EU’s response, German Foreign Minister Annalena Baerbock said. Here’s what you need to know:

Who was allegedly bribed to do what?

Belgian police raided at least 20 sites across Brussels between Dec. 9 and Dec. 13, including inside European Parliament offices, arresting six people and seizing more than $1 million in cash. A Belgian judge charged four of the people on Dec. 11 with “participation in a criminal organization, money laundering, and corruption” on behalf of a “Gulf State,” prosecutors said in a statement.

Belgian officials have not formally identified any of the suspects involved in the alleged scheme, but the people charged are widely reported to include Eva Kaili, a Greek member of the European Parliament (MEP) and one of its 14 vice presidents; her partner Francesco Giorgi, a parliamentary assistant; and former MEP Pier Antonio Panzeri, president and founder of the human rights nonprofit Fight Impunity.

Qatar is widely reported to be the country that bribed the suspects to advocate for them at the European Parliament. Qatar said in a statement Sunday that it “categorically rejects any attempts to associate it with accusations of misconduct,” and “any association of the Qatari government with the reported claims is baseless and gravely misinformed.”

The two others arrested on Dec. 9, identified as Kaili’s father and International Trade Union Confederation chief Luca Visentini, were released.

How did this alleged scheme work?

“It is suspected that third parties in political and/or strategic positions within the European Parliament were paid large sums of money or offered substantial gifts to influence parliament’s decisions,” Belgian prosecutors said Dec. 11. According to the Belgian newspaper Le Soir, Panzeri led the bribery operation on behalf of Doha, doling out cash and gifts to buy influence. His wife and daughter were detained Friday under a European arrest warrant.

Kaili has stood up for Qatar at the European Parliament recently.

In fact, Politico reports, “Kaili has arguably been the dean of the (sizeable group of) Doha defenders within the S&D,” or her Progressive Alliance of Socialists and Democrats faction in the EU parliament. In a Nov. 21 debate on Qatar’s notably spotty human rights record — including using coercive hard labor to build soccer stadiums and infrastructure for the World Cup, resulting in thousands of deaths among migrant workers — Kaili called Qatar “a frontrunner in labor rights.” She had recently returned from a controversial trip to Qatar, where she met with Labor Minister Ali bin Samikh Al Marri.

The World Cup is “proof, actually, of how sports diplomacy can achieve a historical transformation of a country with reforms that inspired the Arab world,” Kaili said. (The European Parliament voted Nov. 24 to condemn Qatar and FIFA, the world soccer governing body, over the migrant worker deaths at the end of the debate.)

Kaili in early December also showed up at the European Parliament’s justice and home affair committee — which she did not have a seat on — to push and vote in favor of allowing Qataris and Kuwaitis to enter the EU without visas, Politico reports.

How has the European Union reacted to the scandal?

The European Parliament started its final plenary session of 2022 in Strasbourg, France, on Dec. 14, and the corruption scandal overshadowed all other business. European Parliament President Roberta Metsola relieved Kaili of all vice presidential “powers, duties, and tasks” on Dec. 10; the S&D suspended her; and her political party in Greece, Pasok-Movement for Change, expelled her. Greek authorities froze her family’s assets.

The European Parliament “is under attack,” Metsola said on Dec. 12. “Our way of open, free, democratic societies are under attack,” she added. “The enemies of democracy for whom the very existence of this parliament is a threat, will stop at nothing. These malign actors, linked to autocratic third countries, have allegedly weaponized NGOs, unions, individuals, assistants, and members of the European Parliament in an effort to subdue our processes.” She promised not to sweep the scandal under the rug and said she will fight to tighten ethics rules.

Elsewhere in Brussels, “the revelations were greeted with shock, but not surprise, with EU watchers and experts noting long-standing concerns about the bloc’s institutions, particularly the European Parliament,” The Washington Post reports. The parliament, with 705 members, is the EU’s only directly elected body, but “it is also seen as the weakest of the three key institutions of the European Union.”

How widespread is the alleged corruption?

There is broad agreement that this is one of the worst corruption scandals in recent EU history, but its extent is a matter of heated debate in Brussels.

“As serious as this is, it’s a matter of individuals, of a few people who made very bad decisions,” one senior parliament official told Politico. “The investigation and arrests show that our systems and procedures have worked.” Valérie Hayer, a French lawmaker with the centrist Renew group, said this isn’t a sign of “generalized corruption” in the 27-member bloc, adding, “Unfortunately, there are bad apples.”

But as the scandal spreads, that position is becoming more untenable. “While this may be the most egregious case of alleged corruption the European Parliament has seen in many years, it is not an isolated incident,” Michiel van Hulten, director of Transparency International EU, said in a statement. The European Parliament “has allowed a culture of impunity to develop,” and “it’s quite likely that there are names in this scandal that we haven’t heard from yet. There is undue influence on a scale we haven’t seen so far. It doesn’t need to involve bags of cash.”

“The courts will determine who is guilty, but what’s certain is that it’s not just Qatar, and it’s not just the individuals who have been named who are involved,” French MEP Raphaël Glucksmann, an S&D member who heads a committee against foreign interference in parliament, told Politico. “If parliament wants to get out of this, we’ll have to hit hard and undertake extremely profound reforms.”

Is the World Cup involved in this scandal?

That “remains unclear,” the Post reports. Qatar certainly faced bad press over its labor and human rights record leading up to the World Cup, and accusations it bribed FIFA officials to get the world’s biggest soccer tournament in the first place. “Maintaining a good reputation is crucial, as Qatar works to hash out deals with EU countries for its natural gas” and visa-free travel, Politico reports.

And Qatar has more or less openly paid prominent people to say nice things about the emirate before the World Cup. English soccer star David Beckham faced some criticism for reportedly earning $185 million to be an ambassador for Qatar and promote the 2022 World Cup as a platform for progress, inclusivity, and tolerance.

At the same time, Qatar also has a history of paying prominent people to illegally lobby on its behalf over topics that have nothing to do with soccer or the World Cup, including in the U.S.

“Whatever its final outcome, the Qatar ‘corruption’ scandal has unveiled an inconvenient, and for most Europeans already obvious, truth. Money does buy influence in the EU,” Alberto Alemanno, a professor of European Union law at HEC Paris, wrote in an op-ed for Politico.

December 14, 2022 December 14, 2022 The European Union is embroiled in a scandal involving alleged influence peddling through a European Parliament vice president, literal bags of cash, a nonprofit organization called Fight Impunity, and a “Gulf State” widely reported to be Qatar, host of the 2022 FIFA World Cup. Nothing less than “Europe’s credibility…

December 14, 2022 December 14, 2022 The European Union is embroiled in a scandal involving alleged influence peddling through a European Parliament vice president, literal bags of cash, a nonprofit organization called Fight Impunity, and a “Gulf State” widely reported to be Qatar, host of the 2022 FIFA World Cup. Nothing less than “Europe’s credibility…

The U.S.-Africa strategy under Biden