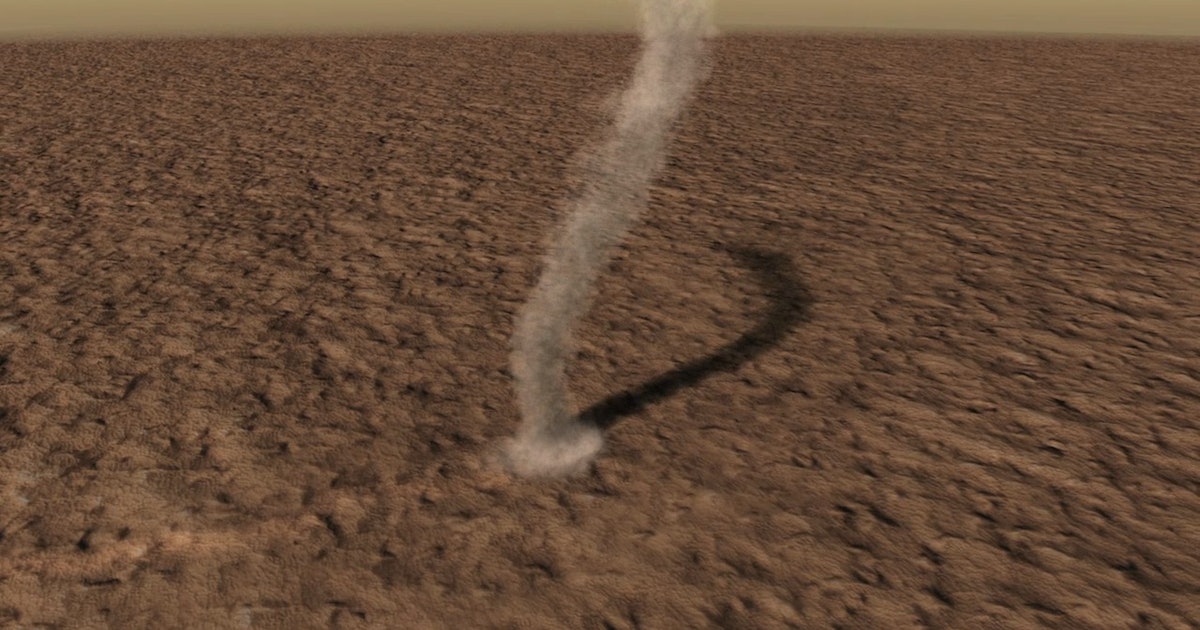 Scientists listened to the center of a dust devil on Mars passing over NASA’s Perseverance rover. Their new study, published Tuesday in the journal Nature Communications, describes the trove of information obtained about this direct strike.

This dust devil was “very routine” and “fairly typical,” Mark Lemmon, study co-author and senior research scientist at the Space Science Institute, tells Inverse. But then the team got the audio. Hearing it “makes it among the coolest we have seen,” Lemmon says.

The air column was 11 meters across, Lemmon says, so just slightly larger than average, and without much dust. But it made a direct hit over NASA’s Perseverance rover, confirmed across several instruments.

Lemmon described the audio of the strike as a present. Alexander Stott, co-author and postdoctoral researcher at ISAE-SUPAERO (short for Institut Supérieur de l’Aéronautique et de l’Espace (ISAE), tells Inverse that the work “was kind of a fishing expedition to catch it,” but then the audio “was a really nice, ‘gotcha.’”

Why it matters — Dust devils don’t typically hit the rover directly like this one did. Some dust devils are quite visually apparent, and look like Earthly ones seen in Arizona or New Mexico. As exciting as it was witnessing Perseverance be in the path of this alien air column, it wasn’t visually clear.

“This one was less clear from that point of view because we just see some dust that is across, a little low elevation area from us, and on the next ridge, we see some dust start to lift off of the ground. And then in the next frame of the image, there’s more dust even closer to the rover, and so on, and I think that that was not visually obviously a dust devil, just from the imaging,” Lemmon says.

Lemmon adds that the Mars Environmental Dynamics Analyzer instrument on the rover captured weather data as well. “In this particular case, we could measure the pressure, the temperature, and the winds. And so a dust devil has the spiraling wind, and so we see a pressure minimum right when the dust devil is almost directly over the rover… and the winds reverse as the dust devil went over,” Lemmon says. “The rover was right smack in the eye of this little dust devil.”

And by chance, the microphone was on as well.

What they did — To capture meteorological data, and visuals and hear a dust devil with Perseverance, the team focused on obtaining midday observations.

Stott says this is “when the atmosphere is most unbalanced.” It paid off: the recorded dust devil occurred just before midday. Stott added, however, that the chances of observing one was still low.

But they finally spotted a Martian dust devil. The team detected it several ways.

Perseverance’s navigational camera caught the dust moving. But the dust devil is not necessarily very apparent. “The one in the paper is like most of the ones we see, in that you could squint at the image for a long time and not be sure if there is anything in it,” Lemmon says.

Lemmon explained that scientists take repeated images of the same direction, and then compare them to an average of all images. The average includes rocks and sky that stay the same, and it’s against these constants that the team can detect wafting dust.

“And once we have that, we can do some pretty standard numerical models to figure out how much dust there is, and that’s how the highlighting was done,” Lemmon says. In the video accompanying the study, the purple region is where scientists have highlighted the dust.

They then combined the visual information with data about winds and heat radiation (that can see warm stuff, like dust, in the Martian sky). The audio recording provided an extra dimension.

The microphone gave scientists “a really good understanding of the fast fluctuating winds,” Stott says. For instance, they could hear the ping of Martian dust grains as they pelted Perseverance, thanks to its microphone.

“It’s got a really fast response, so it tells you about the wind speed [and] variation on very quick scales. But it also recorded the sound of little dust particles hitting the rover,” Stott says. “Hearing these on the rover actually is really interesting because we can count the number of grains that we heard. And this is a way that we can actually understand the density of dust particles within a dust devil, which has not been done before on Mars.”

How this can be used — The sand that lifts up during a dust devil smacks into other dust particles, and lifts them too. So once the wind gets the dust moving, it’s these particles that actually start getting others to move.

These low-to-the-ground dynamics will affect future Martian explorers, both human and robotic.

Lemmon says that, unlike in a Martian dust storm, the dust devil wind is not going to blow anything over. “The wind does not have that kind of power, but it does have the power to pick up this sand and move it around, blow it around.” In some cases — like when a dust devil occurs in a dust storm — the force can become more dangerous. Lemmon says in one such instance, the wind broke wires of Perseverance’s wind sensor.

What’s next — A dust devil may not blow something down, but it triggers sand motion. This creates an electrical charge that Lemmon says should be better understood for increasingly-robust missions to Mars.

Scientists like Lemmon will be using the NASA suite of Mars rovers to monitor the planet’s seasonal changes in the near future.

It is now late northern winter on Mars. But then, on Christmas Day, the Mars team will celebrate Mars’ northern spring equinox, Lemmon says. Perseverance will then be back in the first season it experienced on Mars. It landed on the Red Planet in February 2021. The dust devil from this study happened in early northern summer on Mars.

Scientists listened to the center of a dust devil on Mars passing over NASA’s Perseverance rover. Their new study, published Tuesday in the journal Nature Communications, describes the trove of information obtained about this direct strike. This dust devil was “very routine” and “fairly typical,” Mark Lemmon, study co-author and senior research scientist at the…

Scientists listened to the center of a dust devil on Mars passing over NASA’s Perseverance rover. Their new study, published Tuesday in the journal Nature Communications, describes the trove of information obtained about this direct strike. This dust devil was “very routine” and “fairly typical,” Mark Lemmon, study co-author and senior research scientist at the…