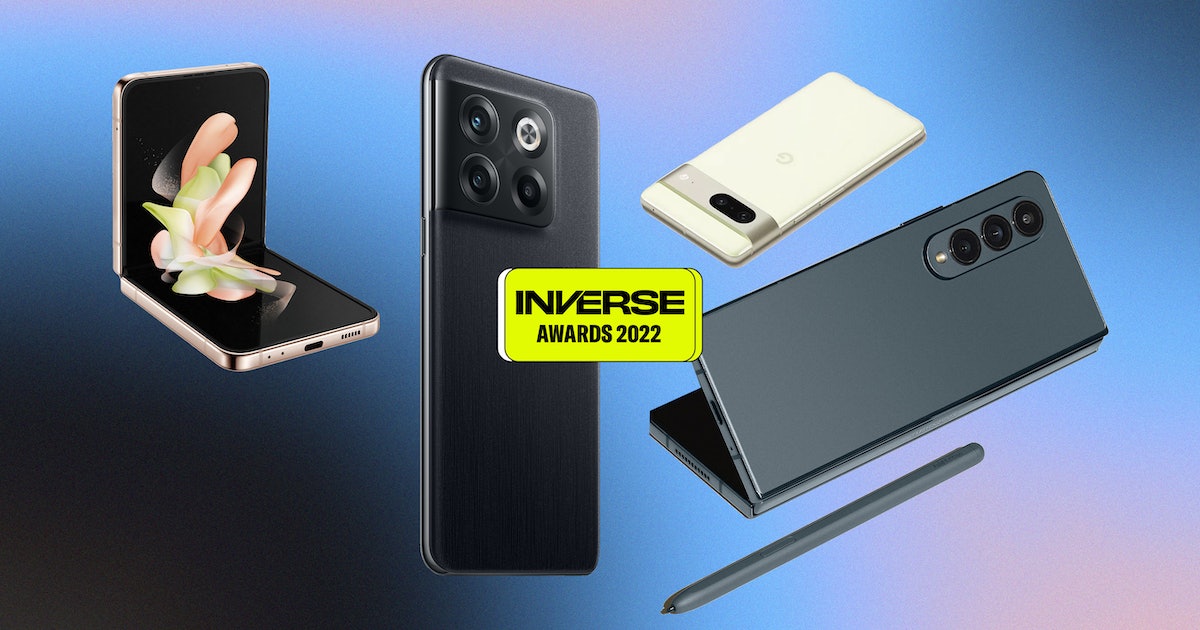 The next big thing in tech might be smart glasses, a stretchable display, or whatever Humane is teasing for 2023. But one thing is certain: Smartphones aren’t going anywhere for a while.

Sure, our big glass slabs have basically reached their apex. There aren’t as many groundbreaking features these days, and for the most part, each new phone offers improvements on the basics — but that doesn’t mean the latest smartphones have nothing compelling to offer. They absolutely do.

Apple, Samsung, and Google all came out swinging for the fences with what we might argue is their very best smartphones in 2022. Newcomers like Nothing made a real splash, too. These phones all connect you to the world and capture your memories in stunning image quality. So here are the nine best phones of 2022, according to the Inverse editors. Please note, these choices are not ranked in any order of preference; they all have something to offer.

Apple did not hold back this year. It’s easy to see why the iPhone 14 Pro and 14 Pro Max are Apple’s most powerful and feature-packed phones ever. The A16 Bionic chip is faster than the already speedy iPhone 13 Pros. The main rear camera can shoot impressively detailed 48-megapixel photos; the Action mode records even steadier videos; the selfie camera finally has autofocus. On top of all that, the notch is gone (replaced with the Dynamic Island) and there’s also an always-on display and new safety features like Emergency SOS via satellite and crash detection. Combined with iOS 16, which has major features such as a customizable lock screen, the ability to edit and unsend iMessages, and the return of the battery percentage indicator, the iPhone 14 Pros check every box.

Samsung’s finest non-foldable smartphone, the Galaxy S22 Ultra, has many features the iPhone 14 Pro doesn’t, like an S Pen stylus and two telephoto lenses that provide an incredible zoom range from 10x to 100x. The design is sleek, the huge Super AMOLED display is extremely bright and sharp, and the battery life and cameras both get high marks. If you prefer Android — it’ll always be more customizable in a way that iOS won’t — there’s no better smartphone than the Galaxy S22 Ultra.

Nothing’s Phone 1 makes this list, not because it has great specs (it’s got a mid-range Snapdragon 778G+ chip and so-so cameras), but because of its eye-catching design and sub-$500 price. The overall shape of the Phone 1 may resemble an iPhone, but the customizable Glyph LED interface exposed through the transparent glass back reveals it is no clone. It doesn’t surprise me that the Phone 1 has stirred up so much excitement. Nothing was founded by OnePlus co-founder Carl Pei, after all.

After stumbling for several years to build a true flagship phone, Google finally did it this year with the Pixel 7 and 7 Pro. The latter has all the bells and whistles, including a 120Hz display, an AI-enhanced triple-lens camera system, and aggressive pricing that undercuts both Apple and Samsung. For a no-nonsense Android phone with the best basics — screen, cameras, battery life, and design — the Pixel 7 Pro is the one to get.

While not as bleeding edge as the Pixel 7 Pro, the Pixel 6a is here for one simple reason: it’s cheap. Not cheap in quality but price. Starting at $449 (and now slashed down in many places), you’d be hard-pressed to find a better-value phone if you’re on a tight budget. A pared-down version of the Pixel 6, the Pixel 6a keeps it simple. Everything here works and works well. It’s not the fastest, but it’s not slow, either. If anything, the Pixel 6a highlights once again how good Google is at processing images with a camera sensor from years ago.

It’s wild that a phone with a 5.9-inch screen is considered “small” nowadays, but such is the smartphone in 2022. While many phone makers seemed to have settled on 6.1 inches being the ideal screen size, Asus goes smaller with the Zenfone 9 without sacrificing on performance. The screen, camera, and battery life are all good enough to handle pretty much anything phones are used for.

Four generations in, Samsung has nearly perfected the phone/tablet form factor. With the Galaxy Z Fold 4, Samsung tightened up the screws, widened the front cover display just enough so it doesn’t feel like a remote, and upgraded the cameras. The still-visible crease and software leave a lot to be desired, but when Samsung’s the only major player selling this form factor outside of Asia, it’s no wonder it’s the best.

Samsung’s smaller foldable phone, the Galaxy Z Flip 4, is a relatively minor upgrade over the previous Galaxy Z Flip 3. But if you’re intrigued by the form factor and more affordable price, the Z Flip 4 is a solid foldable that — just like the Z Fold 4 — is the best in its class by default. Is that a little boring? Maybe! But who cares. This is a regular phone that folds in half! The novelty is still cool as hell.

The next big thing in tech might be smart glasses, a stretchable display, or whatever Humane is teasing for 2023. But one thing is certain: Smartphones aren’t going anywhere for a while. Sure, our big glass slabs have basically reached their apex. There aren’t as many groundbreaking features these days, and for the most part,…

The next big thing in tech might be smart glasses, a stretchable display, or whatever Humane is teasing for 2023. But one thing is certain: Smartphones aren’t going anywhere for a while. Sure, our big glass slabs have basically reached their apex. There aren’t as many groundbreaking features these days, and for the most part,…