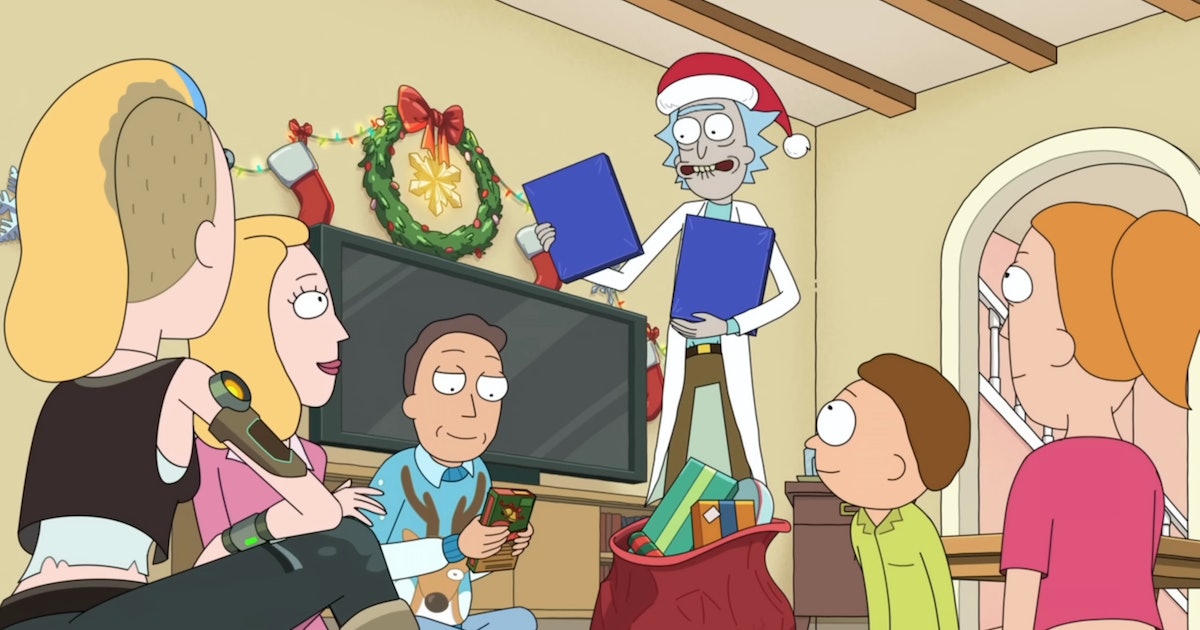 Over the last couple of Rick and Morty episodes, you’ve probably either thought that Rick has finally begun to change for the better… or you’ve become suspicious of how nice he’s been. His gracious new demeanor peaks on Christmas for the Season 6 finale when he gets everyone in the family the perfect gift. But we also get an explanation of how and why he’s been doing his best to make everybody happy — and it’s definitely more naughty than nice.

Spoilers ahead for Rick and Morty Season 6 Episode 10.

For the most part, Rick and Morty Season 6 has been the show at its most consistently enjoyable as an artful blend of procedural storytelling and bigger canonical storylines. After introducing Rick Prime as a new villain, the show’s creators clearly sensed the potential to jump the shark with yet another multiversal supervillain. So they pumped the breaks by disabling portal tech for most of the season, leading to more terrestrial adventures featuring most of the Smith family — including Space Beth.

But in Episode 10, we discover that “Rick” has actually been a Rick robot programmed to make the family happy for a while now. Both versions of Rick team up with Morty (and the President of the United States) to save the world on Christmas Day and fight over Star Wars.

The episode opens with Rick delivering Christmas presents to everyone, which includes an interdimensional version of Miracle on 34th Street that’s at least two hours longer. Morty’s gift is an actual lightsaber that looks like an exact replica of Obi-Wan Kenobi’s weapon with a similar hilt design and blue blade. It’s too bad that almost immediately, Morty drops it vertically so that the blade drills through all the basement layers of Rick’s garage and plummets toward the Earth’s core. The actual Kyber crystals, it would seem, could trigger a reaction with the Earth’s core that would destroy the planet.

While descending through Rick’s underground lair to try to stop the lightsaber, Morty and Rick stumble upon the real Rick, who programmed a Rick robot to make the family happy. Meanwhile, the real Rick has been investigating Rick Prime since partway through Episode 9, “A Rick in King Mortur’s Mort.” Early in that episode, Rick warned Morty not to take the sword from the random Knight of the Sun, and when Morty didn’t listen to him, he realized how low he’d fallen. Midway through the finale, he confesses as much to Morty in the midst of an argument.

“I said don’t take the fucking sword and you were like, ‘Whatever!’ like I’m our neighbor Gene or David Arquette or something! You called me boring! I’ve become dogshit to you! That’s what happens when you let people in and they stop respecting you!”

Rick still helps POTUS and Morty stop the lightsaber. Meanwhile, the rest of the family winds up destroying the Rick Robot.

Later, after a rebuilt Rick Robot sacrifices himself to save everyone, he points out to Morty that Rick built him to make Morty happy. So anything the robot did is technically something Rick did. In other words, Rick is still responsible for being the best version of himself. Even if that version is a robot, it’s still Rick. In a way, this makes for really rich character development that does prove Rick has grown — even if it’s a bit muddled in all the chaotic sci-fi shenanigans.

Remember, when Rick took on the mantle of Pissmaster to redeem both himself and the disgusting villain, he did so because he was working on himself at Dr. Wong’s urging. And that was before he replaced himself with a robot!

In the episode’s final moments, we learn that Rick’s research proved fruitful — sort of. He’s discovered a myriad of locations across the multiverse where he can find Rick Prime. Rick goes on one of his signature end-of-season manic rants about how Season 7 is all about hunting Rick Prime.

Rick and Morty vs Star Wars

Morty’s Christmas lightsaber gives the show an opportunity to criticize the state of the Star Wars franchise in much the same way it has Marvel Studios, which it did aplenty in the Season 6 premiere.

With Earth on the brink of destruction due to lightsaber core penetration in the Season 6 finale, Keith David’s President of the United States recruits Morty and the grizzled, grumpy Rick to help — but not before POTUS unleashes some “Gen-X hatred” on Morty and Star Wars with a great rant:

“You know all that Star Wars shit is silly, right? Lucas promised a new trilogy for decades. Then, when he delivered, fans turned on him and started giving any knucklehead with nerd cred a shot and churned out these irredeemable cash grabs! Half pretend to be satisfying, half shit on it. And in the end, no one is happy. You know why, Morty? Because when you start with a turd, you end with a turd.”

The overall perspective here seems like one that sees The Last Jedi as the sort of story that “shits on” Star Wars and Rise of Skywalker as one that “pretends to be satisfying.” Whether or not you agree, the inherent conflict here highlights the identity crisis with the franchise as it struggles to deliver genuinely compelling, diverse stories while maintaining a certain caliber of mass market appeal.

The “Mickey Mouse shit-machine,” as POTUS calls it, likes to dazzle viewers with expensive blockbusters that oftentimes don’t have much to say. Interestingly enough, Rick and Morty Season 4 had a lot of Star Wars satire and the over-the-top meta-narrative of the Story Train episode. And Season 6 has the same, including an entire episode that functions as a Story Train sequel. Like Star Wars, Rick and Morty struggles with reconciling mass market appeal and relatability with authenticity and creativity.

What do the masses want out of stories? Are they right? What actually counts as good storytelling?

Ironically, POTUS spends most of the episode hating on Star Wars, but as soon as they stop Morty’s lightsaber from hitting the Earth’s core, he steals it for himself. “The franchise raised me,” he admits, “trained me, taught me good from evil, made having a bad father empowering, and when that third movie got all Muppety, something in me began to rot. But make no mistake child, I own Star Wars! Not you!”

This exact kind of self-hating Gen X gatekeeping is a sharply insightful reflection of reality. There’s so much drama about Star Wars in general because everybody has a very specific conceptualization of what it means to them, and as soon as it becomes for somebody else, they perceive it as bad. The Last Jedi proved so controversial because it challenged fan expectations in compelling, albeit frustrating ways. But it makes for a rich story. Of course, a middle-aged person like the President of the United States would hate the sequel trilogy while vaguely defending the prequel trilogy.

These scathing critiques are harsh, but they also read as a touch valid. Why does it take up so much real estate in the Rick and Morty Season 6 finale? Simply put, the show is in a comparable position of having such a prominent status in pop culture, and as the fandom expands drastically, so do the variety of occasionally toxic expectations. For a show that so often explores meta-narratives, it’s imperative for Rick and Morty to reflect on this, and whether or not you find these sorts of stories interesting, they’re some of the most vital that help define the show at large.

Over the last couple of Rick and Morty episodes, you’ve probably either thought that Rick has finally begun to change for the better… or you’ve become suspicious of how nice he’s been. His gracious new demeanor peaks on Christmas for the Season 6 finale when he gets everyone in the family the perfect gift. But…

Over the last couple of Rick and Morty episodes, you’ve probably either thought that Rick has finally begun to change for the better… or you’ve become suspicious of how nice he’s been. His gracious new demeanor peaks on Christmas for the Season 6 finale when he gets everyone in the family the perfect gift. But…