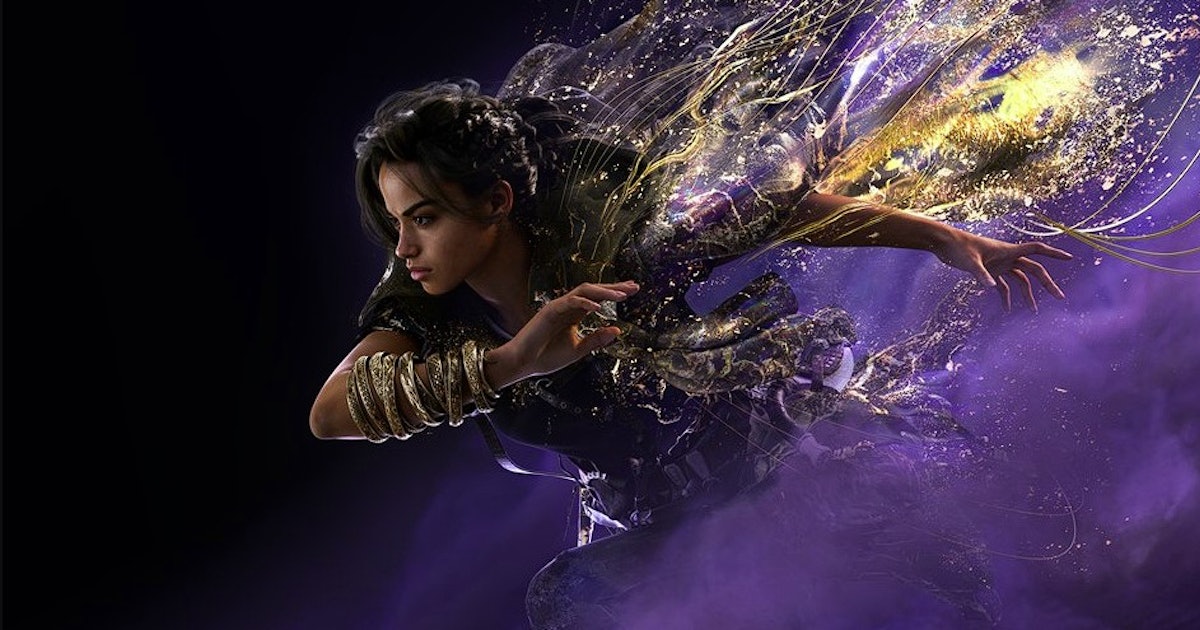 Frey Holland would rather die than have anybody think she is from New Jersey.

The protagonist of Square Enix’s upcoming isekai RPG Forspoken, Frey gets mysteriously transported from her beloved modern-day New York City to the mystical world of Athia. Ahead of the game’s January 24 release, Inverse went hands-on with Forspoken in an extended preview of the game’s early hours.

At face value, Forspoken seems like a fairly run-of-the-mill fantasy RPG that could easily fit in amongst Final Fantasy titles or The Witcher 3, but the world and characters that Luminous Productions has built make it stand out. This interesting cast is led by Ella Balinska’s Frey, whose unapologetically New York attitude makes for an interesting tonal clash between traditional RPG storytelling and more modern trends.

In early August, Square Enix released a much-derided trailer for Forspoken that was accused of having tired Joss Whedon-esque dialogue. I myself took the trailer to task for cliched dialogue like the infamous, “I’m talking to a cuff! Yeah, ok, that is something I do now.” line, pleading for Square Enix to just “let Frey cuss,” as I put it.

Forspoken’s developers told Inverse that they were “not worried” about the backlash to the trailer’s dialogue, saying that when fans got their hands on the full game the full narrative would shine past this little tidbit that was shown.

While I did groan in the first 10 minutes of my preview when I encountered the “I’m talking to a cuff!” line I was immediately taken aback by Frey nonchalantly shouting “Motherfucker!” moments later.

This continued for the rest of my four-hour playthrough as Frey constantly dropped a string of curses at any minor inconvenience. Even though the more cheesy and predictable RPG dialogue does rear its head throughout Forspoken, Frey’s crass penchant for speaking her mind helps cut through the crap.

While dropping the occasional f-bomb in a video game more often than not feels like a bland attempt at a more mature tone, it actually makes Frey feel like a real person. I myself constantly drop f-bombs throughout conversations, even at the most innocuous thing. Accidentally drop a pen while writing notes? You better believe I’m saying fuck. Feeling overwhelmed by a dragon or a horde of creepy zombie-ish people? Fuck!

Maybe it’s the New Yorker in Frey and in me.

Even though the only hint of New York I got during my preview was a short look at the Holland Tunnel, the city looms large in Forspoken as the object of Frey’s mission. She just wants to get home. And, as is true of most residents of the greatest city in the world (fight me!), she can’t shut up about New York when she isn’t actually there.

A particularly memorable interaction sent me into a fit of laughter so loud that everyone in the room began staring. Frey informs Cuff (her talking … cuff) that she found him in New York. Cuff has a hard time grasping the city’s name and confuses it with “Newark.” For Frey — and most diehard New Yorkers — there is no greater insult. “New York and Newark are not the same thing!” she chastises him. He can never make this mistake ever again.

Here we have a woman who may be facing a sentence in a fantasy prison, who was also recently almost getting mauled by a dragon, and her strongest emotional reaction happens when a sentient bracelet suggests she might be from New Jersey.

Frey’s many quips are hyper-specific to New York City culture. I found myself greatly enjoying them but couldn’t help but wonder how this would read to a larger audience. New York’s culture and specific nuances get constantly examined by so many pieces of media that most people might get it — no matter how ridiculous and unfair anti-Jersey sentiments may seem to outsiders.

Even as Frey becomes more invested in Athia, she still oozes New Yorker from head to toe – literally. One of her key character designs is her shoes. They are a pair of stylish sneakers that the game explains are from an up-and-coming brand in New York that Frey spent time waiting in line to purchase. I know real New Yorkers just like Frey. She may seem ridiculous, but she also seems totally real. I can imagine running into her at the bodega in the morning ordering a bacon, egg, and cheese, or knocking back a beer during happy hour at Cubbyhole. She is one of us.

But the care in building Frey’s character extends to the development of Athia’s personality as well.

Too often fantasy worlds feel influenced by a specific set of western medieval tropes. Almost everything falls somewhere on the fantasy spectrum between Lord of the Rings or Game of Thrones.

Another highly-anticipated Square Enix RPG coming in 2023, Final Fantasy XVI, is a mature story set in a western medieval fantasy world with virtually no diversity whatsoever. This is a problem that the franchise, and Square Enix-published titles at large, have long struggled with. There appear to be no people of color in FF16, something the team came under fire for, telling IGN that “while incorporating ethnic diversity into Valisthea was important, an over-incorporation into this single corner of a much larger world could end up causing a violation of those narrative boundaries we originally set for ourselves.”

In contrast, Forspoken’s world is filled with many diverse characters despite the supposed limitations of a western medieval fantasy world. “It was important for us to make Athia feel like a believable, real representation of a world,” Creative Producer Raio Mitsuno tells Inverse, “Even though it’s a fantasy world we wanted to make sure the diversity was there and it felt realistic in a sense.”

Members of the ruling council of the hub city Cipal as well as the Tanta, a group of powerful sorceresses that serve as Forspoken’s main antagonists are all important characters that are women, people of color, or both. Frey herself is a woman of color, a breath of fresh air when compared to the majority of AAA gaming protagonists.

It is important to note that Forspoken has come under fire for how the developers characterize Frey, with one describing her walk as “hip-hoppy.” Other narrative elements have also received criticism for emphasizing harmful stereotypes related to black people. Luminous Productions previously developed Final Fantasy XV, a very white and male-focused story. The developers do not reflect Frey, a black woman. Is this emphasis on diversity a drastic course correction to quell a common criticism of Square Enix? Or is it a story that meaningfully prioritizes diversity and emphasizes people of color?

While the game’s marketing has suggested it is the former, spending time with the game gives me hope it is the latter.

In the past decade, Square Enix has struggled to find a balance between appealing to global audiences and conventions of game design while also sticking to the company’s roots in franchises such as Final Fantasy. Naoki Yoshida, director of Final Fantasy XIV: A Realm Reborn and producer of Final Fantasy XVI, told Inverse that he believes “the series is currently struggling” because of the different opinions on what direction the franchise should go. In other words, one of gaming’s oldest and most beloved franchises is in a bit of an identity crisis.

Forspoken feels like a potential answer to that struggle given shape as a new IP. Frey’s modern sensibilities struggling against the fantasy tropes of Athia is the same struggle playing out behind the scenes at Square Enix. Forspoken does not seem like it will fix every problem, but if Frey can stick the landing, her story may be a massive leap in the right direction.

Frey Holland would rather die than have anybody think she is from New Jersey. The protagonist of Square Enix’s upcoming isekai RPG Forspoken, Frey gets mysteriously transported from her beloved modern-day New York City to the mystical world of Athia. Ahead of the game’s January 24 release, Inverse went hands-on with Forspoken in an extended…

Frey Holland would rather die than have anybody think she is from New Jersey. The protagonist of Square Enix’s upcoming isekai RPG Forspoken, Frey gets mysteriously transported from her beloved modern-day New York City to the mystical world of Athia. Ahead of the game’s January 24 release, Inverse went hands-on with Forspoken in an extended…