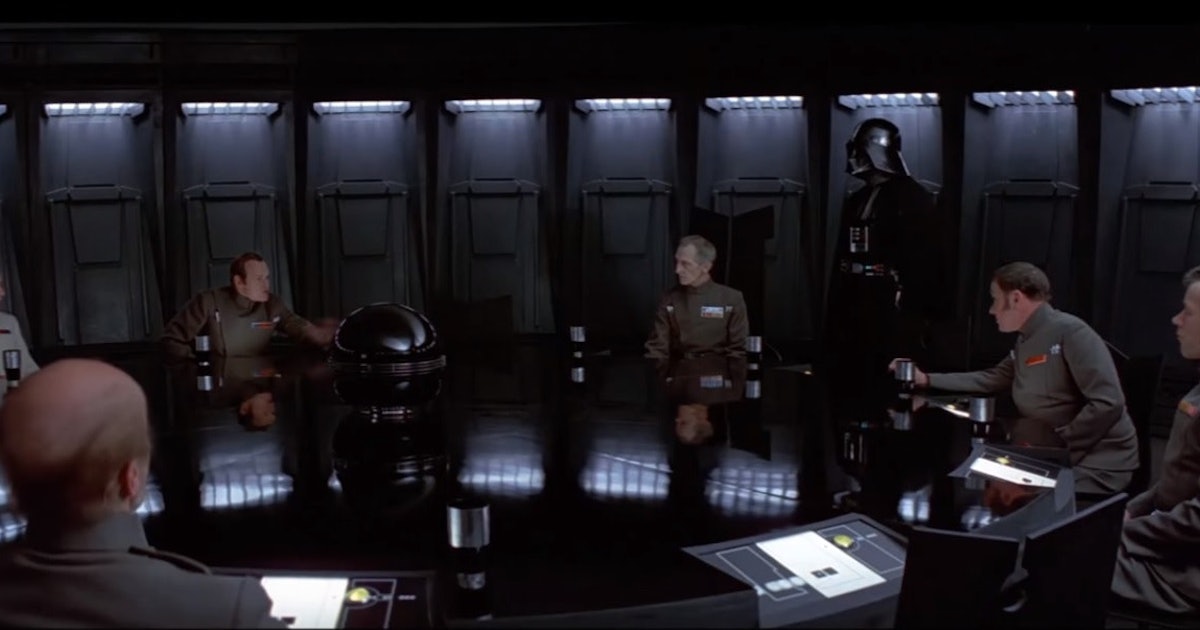 The most important scene in A New Hope has nothing to do with the Force, Darth Vader, or even Luke Skywalker. Instead, it has an impact on the mechanics of Star Wars that the creators of 45 years ago couldn’t have appreciated. Here’s how the conference room scene explains why the Empire operates the way it does in Andor and beyond.

One striking element of Andor is that every scene with Mon Mothma on Courscant doesn’t feel very different from how the upper class behaved in the prequels. As demonstrated in The Phantom Menace, the Senate was corrupt before Palpatine took power, and the hypocrisy that Padmé bemoaned throughout the entire prequel trilogy is only slightly worse.

The Emperor kept the Senate around for the 19 years between Revenge of the Sith and A New Hope, a decision that helped the Rebellion flourish. In the conference room scene, General Tagge notes “The Rebellion will continue to gain support in the Imperial Senate.”

While Andor hasn’t given us overt signs of other senators rallying to the cause of the Rebellion, Mon Mothma is funneling money to them. That the Senate exists at all is both useful to the Rebellion and bad for Palpatine. So why didn’t he dissolve it?

After Tagge mentions the Senate, Grand Moff Tarkin enters and says, “The Imperial Senate will no longer be of any concern to us. I have just received word that the Emperor has dissolved the council permanently.” Tagge has a pointed rebuttal: “How will the Emperor maintain control without the bureaucracy?”

This is possibly the best line of dialogue George Lucas ever wrote. Not only does it lay bare the cynicism Imperial officials have about using a false democracy to suppress people, but it also explains why, for almost two decades, no one really thought the Empire was that different from the Republic. Again, life on Courscant hasn’t changed, and on planets like Ferrix, the Empire was far away.

In A New Hope, Luke Skywalker expresses what is probably a common viewpoint on the Empire, saying, “It’s not like I like the Empire, I hate it. There’s just nothing I can do about it right now.” This apathy toward a corrupt government is common in reality. The bureaucracy of governance makes the government inaccessible to most people, because it’s just too much of a hassle to engage with.

This allowed the Empire to be evil without looking evil. If we never saw Dedra torture anyone in Andor, we might mistake her arc for that of a workplace triumph. The Emperor cultivated needless bureaucracy within the Senate to stall for time, but he also created bureaucracy within the Empire itself, both to its detriment and benefit. Imperial bureaucracy allowed the secret construction of the Death Star, but it also meant the Empire had captured and imprisoned Cassian Andor while the ISB was still searching for him.

Everything about the way the Empire operates, and the way the Rebellion operates within the Empire, is linked to the idea that bureaucracy and busy work create a smoke screen for larger movements. Andor, in a sense, is a show about everything being discussed in the Death Star conference room.

The long game of the Death Star

At the end of its Season 1 finale, Andor’s post-credits scene revealed what everyone had suspected: Cassian and his fellow inmates were building Death Star parts in prison. The Death Star is ultimately what makes the Empire’s evil more overt; once it’s fully operational, the Emperor can’t pretend he’s running a legitimate government.

While there are many moments in Rebels, Obi-Wan, The Bad Batch, and Andor where the Empire reveals its sinister nature to the general population, nothing really gives the Empire leverage like the Death Star. Again the smartest Imperial officer in the room, General Tagge says, “Until this battle station is fully operational, we are vulnerable.”

Everything about Andor proves that this is true. While the Republic was protected by the Jedi, the Empire actually has very little going for it, in terms of a failsafe. The overall policy of the Empire is to be a giant space bully. Andor Season 1 demonstrated that its violent threats were effective, but also fragile.

At the start of Andor, the Preox-Morlana Corporate Zone isn’t even regulated directly by the Empire. It’s only after Cassian becomes a wanted man that the Empire moves in. The finale proves that a marching band and some organized workers were able to bloody the Empire’s nose, and the ruthless Dedra is only saved from the mob because her stalker is hanging around. Five years before Rogue One and A New Hope, everything about the Empire is vulnerable.

Retroactively, this means the Death Star — the most absurd superweapon in all of science fiction — suddenly feels realistic. The Emperor didn’t have a backup plan for keeping the “local systems in line.” Fear of total planetary annihilation was Palpatine’s only real long-term idea. And, in the end, its overt evil is exactly what brought the Empire down. If the Empire had just continued to scheme in the shadows of a soulless puppet democracy, Palpatine might have stayed in power forever.

Star Wars: Andor and A New Hope are both streaming on Disney+.

The most important scene in A New Hope has nothing to do with the Force, Darth Vader, or even Luke Skywalker. Instead, it has an impact on the mechanics of Star Wars that the creators of 45 years ago couldn’t have appreciated. Here’s how the conference room scene explains why the Empire operates the way…

The most important scene in A New Hope has nothing to do with the Force, Darth Vader, or even Luke Skywalker. Instead, it has an impact on the mechanics of Star Wars that the creators of 45 years ago couldn’t have appreciated. Here’s how the conference room scene explains why the Empire operates the way…

40 years ago, an underrated time-travel movie beat ‘Back to the Future’ to its best twist