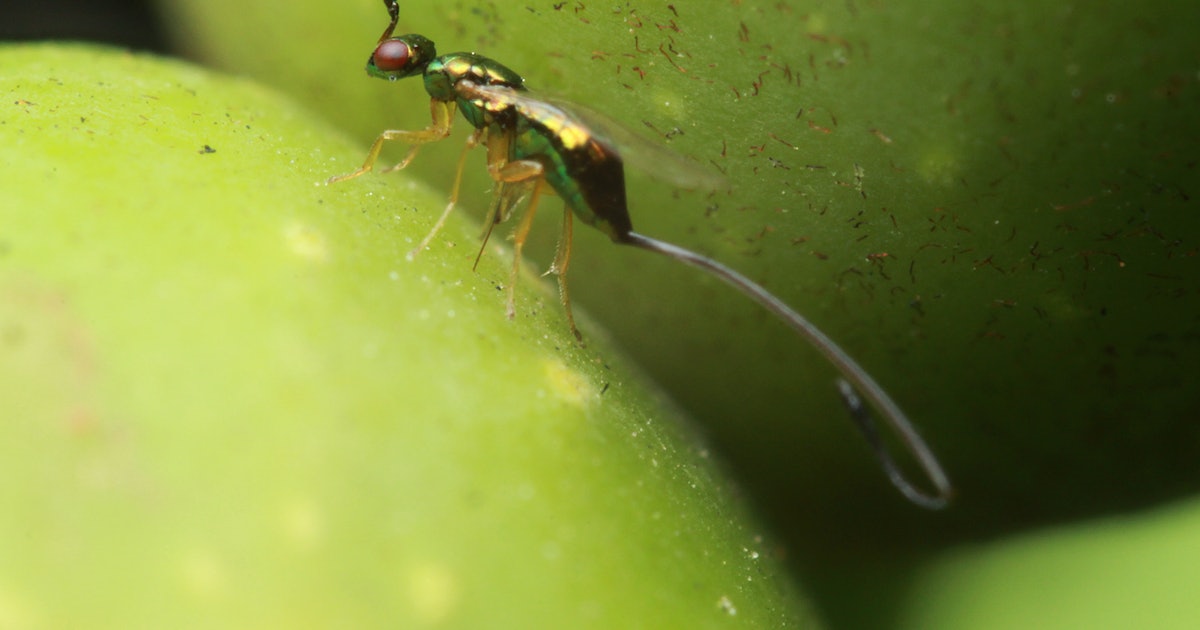 Are figs full of dead wasps? An entomologist reveals the answer

If you don’t believe in soulmates, then the closest thing is the scientific notion of codependent evolution. (Very different from plain ol’ codependency.) This evolutionary kismet takes millions of years to develop, and perhaps nothing exemplifies this symbiosis better than the fig and the fig wasp.

While figs are, for the most part, produced en masse via leaf cuttings, the itty-bitty fig wasp is the flower’s (yes, figs are inverted flowers) only way of sexually reproducing. These insects, all part of the parasitic Agaonidae family, can only carry out this task by living some or all their lives inside the flower — and they all die inside of it. Thus begs the question — are there legions of dead wasps in figs? Inverse has all the details on what’s true about this symbiosis, what’s a myth, and the scoop on that fig crunch.

Lynn Kimsey, professor of entomology at the University of California, Davis explains why even though the fig’s natural soulmate lives and dies in the flower, eating wasps isn’t a concern. Fig wasps aren’t a threat to humans, dead or alive, and while they’re integral to fig pollination, they don’t contaminate the product.

Are figs full of dead wasps?

While it’s true that these wasps hatch and die inside figs, it’s not an insect graveyard. Kimsey says the wasps and their exoskeletons disintegrate by the time figs ripen. Any crunch detected comes from seeds.

If you somehow found a fig with a still-intact wasp, it’s unlikely you’d notice. These wasps are miniscule, with females measuring 1.5 millimeters, roughly twice as large as males. Kimsey invokes the question associated with Dominican priest Thomas Aquinas, “How many angels can dance on a head of a pin?” In the case of fig wasps, Kimsey has a literal answer. “You could probably put half a dozen or more males on the head of a pin,” and maybe 100 on a human thumbnail, she tells Inverse. Finding a dead wasp in a fig is the ultimate needle-in-a-haystack or princess-and-the-pea challenge.

What is the fig wasp’s life cycle?

Fig wasps live and die in figs. Males are wingless and never exit the fruit. Eggs laid in the flowering part of a fig, called the syconium, hatch. Males munch their way through the fig to find other females to mate with. Then, the male chews a tunnel to the outside for the female to escape through the fig’s eye, opposite its stem. The female, laden with eggs, makes a run for it while the male perishes, having never known the outside world.

The female flowers from an unripe fig put out a redolent scent that draws its counterpart female fig wasp. The female searches for another fig. Though the male never gets to leave, the female isn’t much luckier. Her second fig will be the one she dies in, as burrowing into it will destroy her wings.

“It’s kind of a one-shot deal, because figs have all these downward-pointing structures around the opening,” Kimsey says. “Going in is easy. Getting out is not so easy.”

Once inside, the female wasp lays eggs inside seeds-to-be while spreading pollen from her first fig. Female fig wasps have a long, slender ovipositor for injecting eggs into the syconium. Here’s one stellar example of codependent evolution: The fig wasp is both small enough to wriggle into the fig, and has an anatomical tube to lay eggs deep in the flower.

Do supermarket figs come from wasps?

Most commercial figs sold in the U.S. can be grown without pollination. So, fig wasps only are responsible for wild figs, which aren’t as sweet as mission figs.

These wasps aren’t to be feared outside of figs, either. Kimsey says they could never hope to penetrate human skin, so stings aren’t an issue. In any case, there are zero dead wasps inside figs. But even if there were, Kimsey says, “It’s probably just a little extra roughage.”

Now read this: Does turkey make you sleepy? The sneaky truth behind Thanksgiving food comas

If you don’t believe in soulmates, then the closest thing is the scientific notion of codependent evolution. (Very different from plain ol’ codependency.) This evolutionary kismet takes millions of years to develop, and perhaps nothing exemplifies this symbiosis better than the fig and the fig wasp. While figs are, for the most part, produced en…

If you don’t believe in soulmates, then the closest thing is the scientific notion of codependent evolution. (Very different from plain ol’ codependency.) This evolutionary kismet takes millions of years to develop, and perhaps nothing exemplifies this symbiosis better than the fig and the fig wasp. While figs are, for the most part, produced en…

This classic sci-fi movie on HBO Max popularized a futuristic technology — can science make it happen?

You need to see 2022’s best meteor shower this week