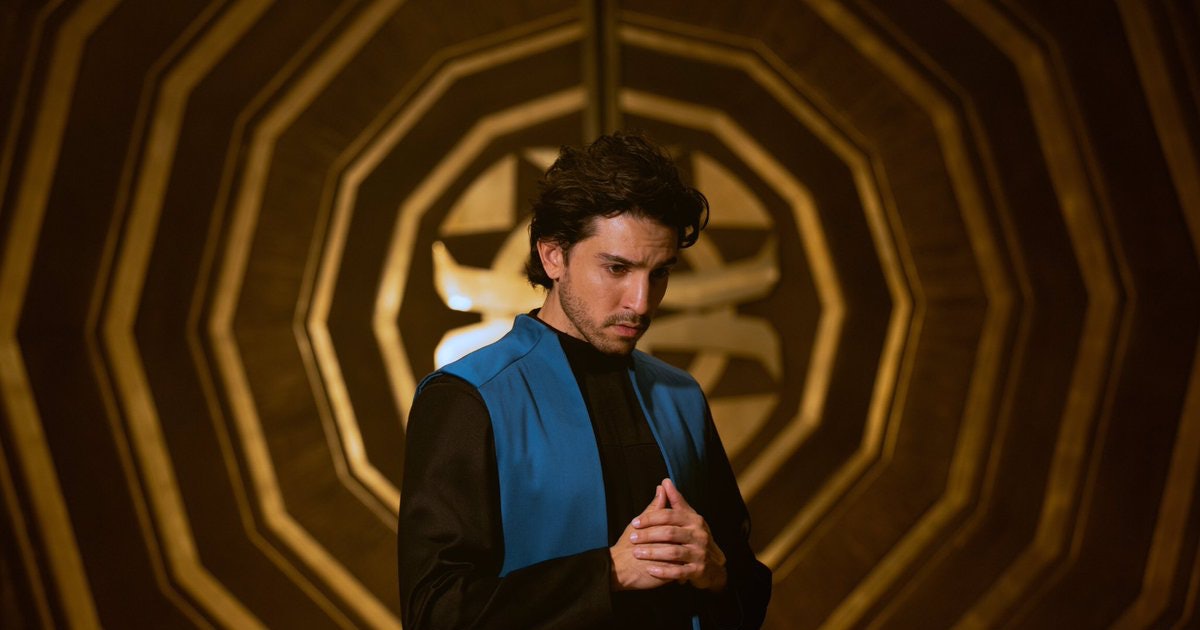 We meet Father Luis Gomez, portrayed by Jamie Ward, in Episode 1 of His Dark Materials Season 3— the third and final season of the gorgeously shot and mostly faithful book-to-screen adaptation of Philip Pullman’s His Dark Materials series.

The antagonist is an assassin from the Magisterium (a thinly veiled fictional version of our world’s Catholic Church in Lyra’s universe), who is eager to kill teenaged Lyra Silvertongue (Dafne Keen), because she is the incarnation and second-coming of the Biblical Eve, prophesied to be the “fall of man” (once more) and to keep humans “submissive” to their temptations and sins.

While Father Luis Gomez is never outright described as handsome in the source material — The Amber Spyglass by Philip Pullman — he is characterized as amiable, even as far as courteous and charming, no matter who he is speaking to (or hurting). But in the televised adaptation… Well, the priest is most definitely hot.

Spoilers for Episodes 1-2 of His Dark Materials Season 3

Much like House of the Dragon’s Lord Commander Criston Cole, Father Luis Gomez is a handsome zealot who preaches doing evil for the sake of good — Criston Cole acts on this twisted mentality for the Iron Throne (more specifically, Alicent Hightower and The Greens), while Father Gomez commits unspeakable cruelties for his religious order and beliefs. The priest is certain that humans will be freed from sin and God will reach Heaven only if Lyra, and the incarnation of the Biblical Adam, Will Parry (Amir Wilson), are slain and sacrificed.

Their motivations may be different, but Criston and Father Gomez have similar aesthetics and similar vibes. Here’s all the villainy you should expect to see Father Gomez take part in during His Dark Materials Season 3.

Warning: MAJOR (and likely) spoilers for the last season of His Dark Materials

While the devoted cardinal is loyal to the Church and the Consistorial Court of Discipline, he cares more about saving humanity than saving the life of one girl — Lyra — and will murder and tear the threads of the multiverse apart in order to save himself and humans in his (and Lyra’s) dimension.

In the books, Father Gomez is given a mission by Father MacPhail (Will Keen): Follow Dr. Mary Malone (Simone Kirby), the astrophysicist and neuropsychologist studying dark matter from Will Parry’s (and technically our) world who was last seen in Cittàgazze, but is about to enter the world of the Mulefa (a species of sentient beings that look like elephants, but have wheeled hooves, and can see Dust). Father MacPhail insists that Dr. Malone will lead him to Lyra. In the show, this mission is changed to Father Gomez being told to follow Mrs. Marisa Coulter (Ruth Wilson), and do “whatever it takes” to get close to her and convince her to give him Lyra. It isn’t clear whether or not that mission will change so as to have Father Gomez follow Mary to get to Lyra, considering Marisa has Lyra at the moment— or, at least she thinks she does until Will takes her from both Marisa and Father Gomez’s sight.

Father Gomez eventually finds his way to the Mulefa’s world, and immediately stirs the pot in order to complete his mission— he makes a deal with the only known enemies of the Mulefa, the Tualapi swans, and organizes an attack with them on the Mulefa’s villages. They fear Father Gomez (and his rifle) and blindly follow the stranger’s commands.

At this point in the story, Lyra is with Mary. In the chaos of the Mulefa village’s destruction, Father Gomez finds a clear aim to shoot her — but before he can, the angel Balthamos (Kobna Holdbrook-Smith) separates Father Gomez from his daemon, and holds Father Gomez’s head underwater, drowning him. Father Gomez’s daemon (a beetle, though in the show it is changed to a spider), attacks Balthamos and mortally wounds him with multiple bites before disintegrating — what typically occurs shortly after the death of a person from Lyra’s universe. Father Gomez’s corpse is then fed on by enormous blue lizards, who are scavengers in the Mulefa’s world.

The Inverse Analysis — So, was Jamie Ward cast as Father Gomez to be the show’s “Criston Cole” (Fabien Frankel), who was wildly popular among House of the Dragon fans, despite playing a major antagonist, due to his good looks?

Considering His Dark Materials Season 3 started principal photography right around the time House of the Dragon Season 1 did, it seems that the casting choice was likely coincidental, though not without purpose. His Dark Materials’ cast has been mostly comprised of young actors or mostly middle-aged actors — bringing someone in like Jamie Ward to the fold could have lured in extra Gen Z and Millennial eyes that may need some age-appropriate eye candy in their TV. It’s purely hypothetical conjecture, but entirely plausible, that HBO was also banking on the “hot priest” trope made popular with Amazon Prime Video’s Fleabag (2016) and star Andrew Scott, who was prominent in His Dark Materials Season 2.

All of this is to say: We’re not sure why the book-to-screen adaptation of Father Luis Gomez is attractive, but we’re not mad about it, either.

We meet Father Luis Gomez, portrayed by Jamie Ward, in Episode 1 of His Dark Materials Season 3— the third and final season of the gorgeously shot and mostly faithful book-to-screen adaptation of Philip Pullman’s His Dark Materials series. The antagonist is an assassin from the Magisterium (a thinly veiled fictional version of our world’s Catholic…

We meet Father Luis Gomez, portrayed by Jamie Ward, in Episode 1 of His Dark Materials Season 3— the third and final season of the gorgeously shot and mostly faithful book-to-screen adaptation of Philip Pullman’s His Dark Materials series. The antagonist is an assassin from the Magisterium (a thinly veiled fictional version of our world’s Catholic…