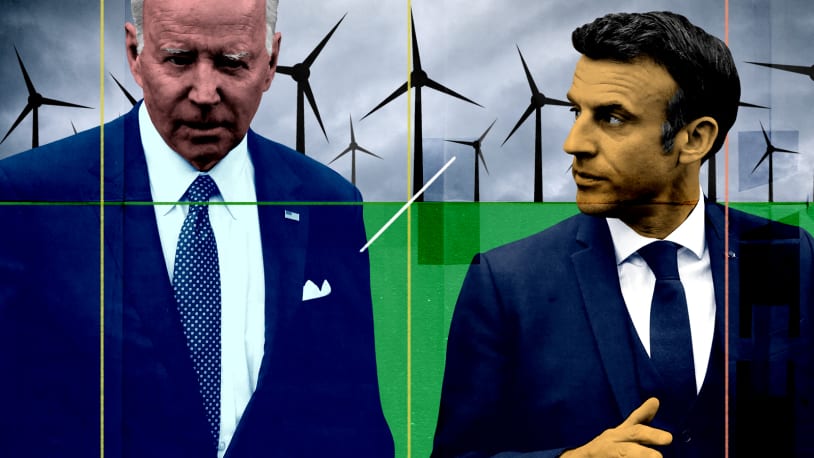 Why is Europe mad about Biden’s IRA?

Are Europe and the United States headed toward a trade war? It’s a possibility.

European Union countries are complaining about America’s new Inflation Reduction Act, which offers billions of dollars in incentives to U.S. manufacturers who make climate-friendly products. The problem? EU officials see the law as an “aggressive hit on the EU industrial base,” according to The Washington Post — one that might devastate manufacturing in places like Germany and France by giving American companies an unfair advantage. Why is the IRA causing such trouble with Europe? Will the continent retaliate with its own subsidies? Here’s everything you need to know:

Why are Europeans distressed about the IRA?

They’re worried about unfair competition. The Inflation Reduction Act offers tax breaks and subsidies for companies that make and use renewable energy technologies — everything from electric cars to heat pumps to electric induction stoves — but only if those products are made in North America. EU officials say those incentives “put European companies at a disadvantage to U.S. rivals,” Reuters reports, and worry that they might lose both jobs and manufacturing plants to America. (Indeed, the battery maker Northvolt is delaying its plans for a new plant in Germany, and looking to the U.S.) “Competition is good,” European Commission President Ursula von der Leyen said this week. “But this competition must respect a level playing field.”

Sometimes! Perhaps most notably, Germany, Spain, and France have long subsidized Airbus, the maker of airline jets, with loans that let the company develop new aircraft models — and with payment required only if the new product becomes commercially successful. Those subsidies have been challenged by the United States, Politico reported in 2021. “Since 2019, Europe and the United States have slapped heavy tariffs on each other in their conflict over state support for Boeing and Airbus.” The two sides agreed to a five-year “ceasefire” in June 2021, but that debate demonstrates that trade disputes between America and Europe are nothing new.

Why doesn’t Europe subsidize other industries, then?

There has been some talk, but there are complications. Euractiv reports that it “is unclear how the EU would finance its own subsidy scheme that could rival the U.S. model” — remember that the IRA commits a whopping $369 billion to climate and energy programs — and there are fears of an “escalating subsidy race” with the United States. Germany, in particular, has warned against the EU taking on new debt to aid its industries. Still, EU officials are discussing an emergency “European Sovereignty Fund,” out of worries that if the European Union doesn’t offer a solution, individual member countries might undermine the continent’s common market by throwing cash at their own industries. “We think any intervention must be taken at the European level, preserving the integrity of the single market,”  said Italian Economy Minister Giancarlo Giorgetti.

Will America make any concessions to Europe?

That’s unclear. President Biden clearly wants to avoid undermining European allies, particularly while the Russo-Ukrainian war is underway. He promised to “work out” some differences during a summit with French President Emmanuel Macron. “We’re going to continue to create manufacturing jobs in America but not at the expense of Europe,” Biden told reporters. But it’s unlikely that the U.S. Congress will make any large-scale revisions to the IRA to accommodate the complaints, Reuters explains. That means the best hope for the EU may be to work for some of the same exemptions to the “Buy American” provisions in the law that are already granted to Canada and Mexico. That may only go so far: Foreign Policy reports that American manufacturers “will push back against an overly generous interpretation of the law.”

Both sides are talking, and have established a task force to try to resolve the dispute. “We’ve heard concerns clearly from our European friends about certain specific aspects of the legislation,” Secretary of State Anthony Blinken said in a press conference this week.

There is still the chance of a trade war, however. The New York Times reports that the EU might file a formal complaint with the World Trade Organization, which referees trade disputes. “If things really sour, you might see some kind of retaliatory tariffs,” one European analyst told the paper.  “But I don’t think this is anyone’s preferred objective.” It’s clear, though, that the dispute over the Inflation Reduction Act threatens the normally friendly relations between the United States and Europe. “While … the ‘buy American’ provision may have been what President Biden needed to get the bill through Congress,” one European official told CNN, “such a policy isn’t how you treat friends.”

Are Europe and the United States headed toward a trade war? It’s a possibility. European Union countries are complaining about America’s new Inflation Reduction Act, which offers billions of dollars in incentives to U.S. manufacturers who make climate-friendly products. The problem? EU officials see the law as an “aggressive hit on the EU industrial base,”…

Are Europe and the United States headed toward a trade war? It’s a possibility. European Union countries are complaining about America’s new Inflation Reduction Act, which offers billions of dollars in incentives to U.S. manufacturers who make climate-friendly products. The problem? EU officials see the law as an “aggressive hit on the EU industrial base,”…

What’s at stake in the Supreme Court’s 303 Creative v. Elenis?

Is Mike Pence going to run for president?