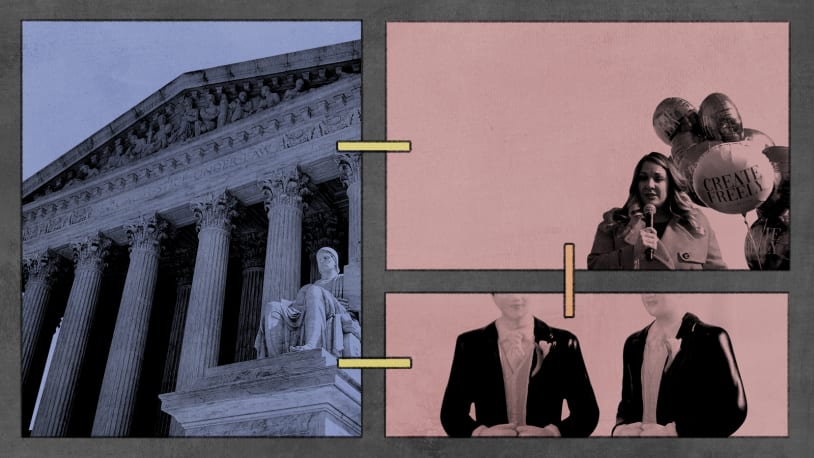 What’s at stake in the Supreme Court’s 303 Creative v. Elenis?

The Supreme Court recently heard arguments in a case involving a business owner’s right to deny service to same-sex couples. The justices are poised to decide whether such businesses are protected by First Amendment free speech rights.

Here’s what you need to know about the case:

What is at stake in the 303 Creative v. Elenis case?

Lorie Smith is a Colorado businesswoman who is looking to launch a wedding website service for her web design business, 303 Creative LLC. Smith has yet to launch the service because she is wary of violating a Colorado public accommodation law. Smith does not want to offer the wedding service to same-sex couples because it would contradict her religious beliefs. Smith is suing the state, arguing that the law is infringing on her right to free speech by compelling her to create art that goes against her beliefs.

“Colorado is censoring and compelling my speech and really forcing me to pour my creativity into creating messages that violate my convictions,” Smith said in a recent interview with The Washington Post. “There are some messages I cannot create.”

Her opponents disagree and say that her lawsuit could set a dangerous precedent for discriminatory business practices. The state and LGBTQ rights supporters say Smith is looking for a way to permit discrimination in the marketplace, per CNN. The state argues that the law governs a business owner’s conduct, not their speech.

“Once you open up your doors to the public, you have to serve everybody,” said Phil Weiser, Colorado’s attorney general. “You can’t turn people away based on who they are.”

Smith lost her case in two lower courts, but the Supreme Court agreed to hear her appeal earlier this year. When the court agreed to take the case, it declined to hear her arguments that the Colorado law violated her right to religious freedom, instead choosing to view the case through the lens of free speech.

LGBTQ rights supporters have feared that the Supreme Court conservative majority has plans to attempt to reverse Obergefell v. Hodges, the 2015 landmark opinion that legalized same-sex marriage nationwide. Following the overturning of Roe v. Wade, Justice Clarence Thomas called on his peers to review Obergefell. The U.S. government is now on the verge of codifying national recognition of same-sex marriages after the Senate successfully passed the Respect for Marriage Act.

Has SCOTUS heard other cases that pit freedom of speech against LGBTQ rights?

About four years ago, the Supreme Court narrowly avoided making a judgment in a similar case from Colorado when they heard the case of Masterpiece Cakeshop v. Colorado Civil Rights Commission. Jack Phillips, the owner of the Colorado bakery, was sanctioned by the commission after turning away a gay couple who asked him to make them a wedding cake. Phillips argued against the same law at the center of Smith’s case, saying it penalized him for not wanting to make cakes that contradicted his religious beliefs. The justices ruled in favor of the baker, finding that the Colorado Civil Rights Commission was hostile toward him because of his religious views. The court did not, however, make a ruling that could be applied to similar situations. Justices narrowed the scope of their ruling to the specific situation, declining to decide if businesses had a First Amendment right to discriminate against customers based on personal beliefs.

How did Supreme Court Justices respond to the latest case?

After hearing oral arguments for the case on Monday, the Supreme Court’s conservative majority seemed to be leaning toward ruling in favor of Smith, the web designer. The conservative justices weighed the case through the lens of free speech, and suggested that the government cannot compel artists to create customized products to express messages that contradict their religious beliefs.

Justice Thomas spoke about the history of public accommodation laws intersecting with the First Amendment, saying, “This is not a restaurant, this is not a riverboat or a train,” per CNN. Justice Neil Gorsuch posited that a business’s objection to serving same-sex couples would not be based on their status but on the message the business did not support. Gorsuch says the question isn’t the “who” but the “what.” Justice Amy Coney Barrett told the designer’s lawyer that her “strongest ground” is that the Smith’s work is “custom.”

Since Smith is preemptively suing before being put in the position to turn a couple away, the justices resorted to hypothetical situations to test the merit of the opposing arguments. Justice Ketanji Brown Jackson, one of the court’s three liberals, imagined a hypothetical business that wanted to refuse to take pictures of Black children on Santa’s lap. Based on their argument, Jackson questioned Smith’s lawyer if this refusal should be allowed.

Conservative Justice Samuel Alito countered with a scenario in which someone asked a Black Santa to take pictures with a child wearing KKK regalia. Several of the other examples he pitched, including an allusion to a Jewish dating app, and a website for extramarital affairs, drew fire from the public after the hearing.

Jackson’s fellow liberal justices did not seem moved by Smith’s lawyer’s arguments, either. Justice Sonia Sotomayor said if the court ruled for Smith, it would be the first time in history that the justices would say that a “commercial business open to the public, serving the public, that it could refuse to serve a customer based on race, sex, religion or sexual orientation.”

The Supreme Court recently heard arguments in a case involving a business owner’s right to deny service to same-sex couples. The justices are poised to decide whether such businesses are protected by First Amendment free speech rights. Here’s what you need to know about the case: What is at stake in the 303 Creative v.…

The Supreme Court recently heard arguments in a case involving a business owner’s right to deny service to same-sex couples. The justices are poised to decide whether such businesses are protected by First Amendment free speech rights. Here’s what you need to know about the case: What is at stake in the 303 Creative v.…

Why Democrats want to change the primary calendar

Why is Europe mad about Biden’s IRA?