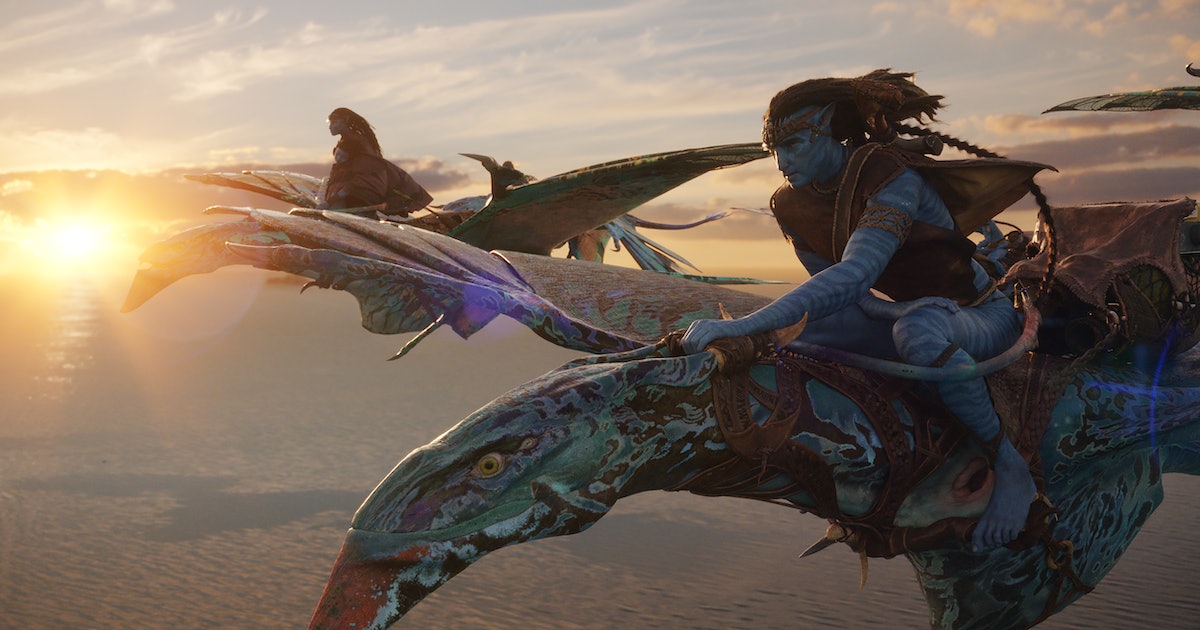 When Avatar opened in 2009 and became one of the highest-grossing movies of all time, it was both the vanguard of cinema’s technological present and a portent of its future. Thirteen years later, producer Jon Landau thinks Avatar: The Way of Water will have a similar effect thanks to the film’s many technological breakthroughs.

“We have a world we can’t possibly build and experience,” Landau tells Inverse. “You don’t want makeup on nine-foot characters. Technology is our only answer. And we set the bar for ourselves higher and higher each time we make a movie.”

Written and directed by James Cameron, the original sci-fi epic Avatar — set in a lush garden world called Pandora, home to wild beasts and towering blue aliens — encompasses complex but universal themes, from the careless greed of imperialism to love transcending cultural barriers. Its technical artistry is equally intricate. For his movie, Cameron strove to inch past the bleeding edge of cinema to bring Pandora to life. In doing so, the director and his army of artists paved the roads other filmmakers traveled for over a decade.

Into the Deep (Learning)

Riding shotgun into Pandora is Jon Landau, a former 20th Century Fox executive who steered the studio in the ‘90s. Landau produced Cameron’s seminal 1997 period romance Titanic, another box office juggernaut, before breaking records again with Avatar. The two reunite on Avatar: The Way of Water, and will collaborate once more on the untitled Avatar 3.

Aside from Cameron, Landau is one of few who have seen Avatar grow from words on a page to images on a screen. To Landau, the 13 years that separate releases is an entire generation of technological evolution. “I would describe two things as being impossible on the first movie,” Landau tells Inverse. “One, most importantly, is the quality of the facial performances we’re now able to get.”

As Landau explains, the first Avatar captured actors’ facial performances for the alien Na’vi using a single standard-definition camera. For The Way of Water, “we’re doing it with two high definition cameras, getting a much higher fidelity performance.” One of those cameras features deep learning — a subcategory of machine learning in artificial neural networks that, although first explored in 1962, has been more widely adopted in recent years — that “allows us to drive the muscles inside the face to create much more nuanced performances,” Landau says.

The Ways of Water

There’s also the water in The Way of Water. “Water is a challenge,” Landau says, not to mention “the number of shots that require water interaction and water waves.”

What makes water hard to achieve in movies, not just Avatar, is that it’s notoriously unpredictable with texture. “We all know what water looks like. We all know how a wave looks. We couldn’t fake that. We couldn’t just come close. We had to do a standard that nobody had ever done before.”

Avatar: The Way of Water adds a galaxy of complexity with its Na’vi characters, none physically real. “For these characters that are Na’vi, we don’t photograph them. We use performance capture,” says Landau. “No one had ever done performance capture underwater. We had to come up with a technique and a process to do that.”

This included training the cast to hold their breaths long enough to shoot entire takes.

“They were not going to be down there on scuba gear. They couldn’t give a facial performance,” Landau says. “So we had to teach them to breath hold. We got them to go down underwater and feel comfortable where they can do scenes for two, three minutes at a time on a single breath.” For this part of filming, production consulted with free-diving expert Kirk Krack.

Says Landau, “Sigourney Weaver said to Jim [Cameron], ‘I can’t hold my breath for 30 seconds.’ Her first day working with Kirk and learning his techniques for breathing and relaxing your body, letting your mind go, she did a minute-and-a-half breath hold her first day. She was incredible in the water.”

Footprints in the Sand

A more niche appeal of The Way of Water is, to Landau, what the movie will prove to other filmmakers. “I think what filmmakers will see is that we need theaters as our partners,” he says. “Projection systems have improved drastically. I think filmmakers are going to see and understand they can aim for a higher target on what theaters can deliver. That allows us to remind consumers we can give them something in the theater that they simply can’t get at home.”

Avatar’s legacy, or even lack thereof, is as opaque as the mathematics of coding a swimming Na’vi. While Avatar grossed Marvel levels of box office revenue years before The Avengers, observers everywhere from Reddit to The New York Times have pondered why the movie hasn’t left a “pop culture footprint,” or evidence of an impression in some traditional sense.

Detractors argue kids don’t dress Na’vi for Halloween, and parents didn’t name their newborns Neytiri. Those in the pro-Avatar camp, or anyone who thinks about movies beyond tie-in merchandise, argue this is no way to evaluate a movie’s merit.

Avatar wasn’t the first sci-fi film to wow audiences with a realized world and convincing effects. In his 931-word review praising Avatar, the late critic Roger Ebert name-checked another sci-fi giant in the first sentence. “Watching Avatar, I felt sort of the same as when I saw Star Wars in 1977,” wrote Ebert. But if Avatar was meant to be the next Star Wars, you wouldn’t know it looking at Target’s toy aisles.

If there is a legacy to Avatar, it’s how it morphed blockbuster cinema in ways few could predict and put into words. For one, it further cemented IMAX as a go-to canvas for filmmakers specializing in event releases, from Christopher Nolan (who used it for a few scenes in his 2008 epic The Dark Knight) to Marvel Studios. The innovations in its visual effects allowed other VFX-heavy movies to achieve their own artistic ambitions.

For Landau, Avatar is simply a movie, now two, that allows James Cameron to explore.

“What inspires him to keep playing in the sandbox are these characters, their journey, and the universal themes they allow us to tell stories that have a relevance to our world today,” Landau says. “Avatar is an IP that has an ethos. We believe it’s about something. It’s about looking at our world differently, gaining a greater appreciation for it. That’s why we play.”

Avatar: The Way of Water opens in theaters on December 16.

When Avatar opened in 2009 and became one of the highest-grossing movies of all time, it was both the vanguard of cinema’s technological present and a portent of its future. Thirteen years later, producer Jon Landau thinks Avatar: The Way of Water will have a similar effect thanks to the film’s many technological breakthroughs. “We…

When Avatar opened in 2009 and became one of the highest-grossing movies of all time, it was both the vanguard of cinema’s technological present and a portent of its future. Thirteen years later, producer Jon Landau thinks Avatar: The Way of Water will have a similar effect thanks to the film’s many technological breakthroughs. “We…

No, there won’t be a “new” Indiana Jones — and that’s a good thing