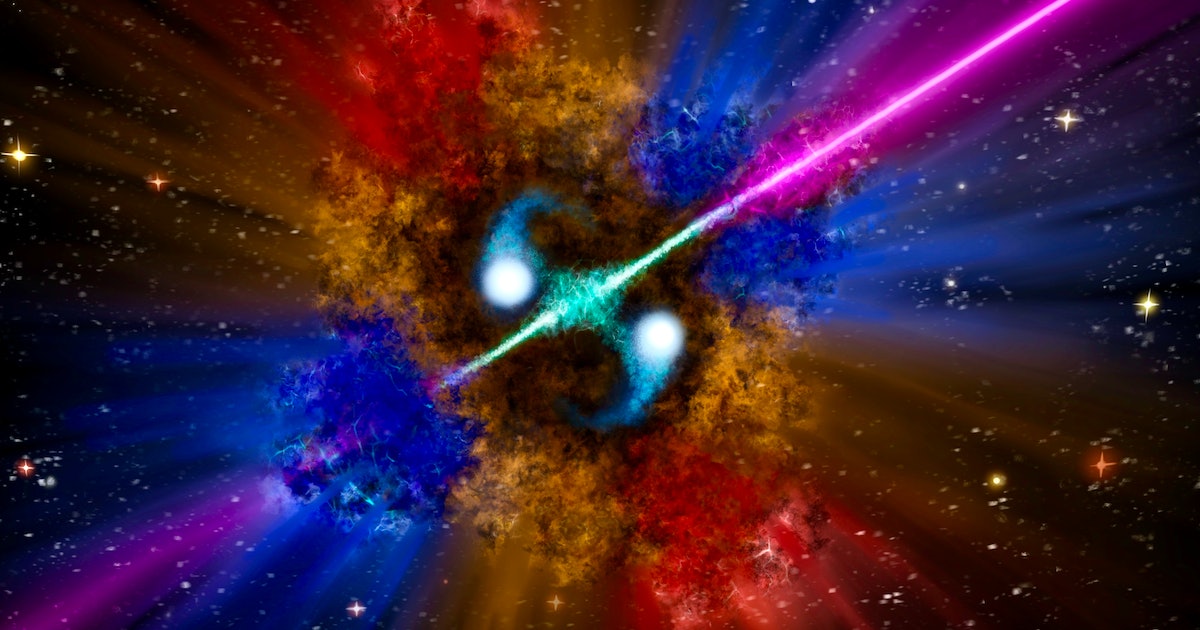 Last December, astronomers caught sight of an extremely bright, extremely close gamma ray burst that lasted for a little under a minute — close as far as gamma ray bursts, anyways: about a billion light-years away. Ordinarily, it would be interesting, but nothing groundbreaking, something to be filed away with the tens of thousands of other long gamma ray bursts that have been observed over the past half-century. But then, something didn’t happen: the supernova required to create such a lengthy explosion was nowhere to be found.

WHAT’S NEW — Since 1993, when astronomers had enough data to make the distinction, researchers have divided the gamma ray bursts that occasionally sear through the sky into two categories: short — less than two seconds or so — and long — anywhere from two seconds to tens of thousands of seconds, or a few hours.

Most gamma ray bursts this length are created by supernovae. But that’s not just because they’re more powerful, explains Bing Zhang, an astrophysicist at the University of Nevada, Las Vegas and a co-author on one of the papers. “The density of the star really defines the duration,” Zhang tells Inverse.

The accretion process of an object like GRB211211A “shouldn’t have taken more than about two seconds,” Benjamin Gompertz, an astronomer at the University of Birimingham and the lead author on another of the papers, tells Inverse. But instead “it lasted about a minute and had about 12 seconds of very powerful, high energy X-rays and gamma rays.”

The researchers can be sure of this in part because of what they did see: not a supernova but a much weaker kilonova, the signature of a merger between two small objects.

Kilonovae were first discovered in 2013, but the best-studied one up until now was AT2017GFO, which burst onto the scene in 2017. It was the best-studied kilonova — but GRB211211A was much closer, much brighter, and, most importantly, didn’t behave the way kilonovae are supposed to.

WHY IT MATTERS — It’s not clear what exactly caused such a long gamma ray burst. Eleonora Troja, an astrophysicist at the University of Rome and the author of one of the papers, tells Inverse that with regards to models, “we are definitely missing a very important piece of the puzzle.”

But a team including Zhang has a suggestion for what might have caused it: the merger of a neutron star not with another neutron star, as is common for short gamma ray bursts, but with a white dwarf. White dwarfs are larger than neutron stars, but not nearly as big as the massive stars that cause supernovae, which would account for the length and intensity of the unusual burst.

Since there are lots of white dwarf-neutron star binaries and events like this are rare enough that it’s the first to be observed in half a century of looking, he suggests it needs some qualifications: first, the white dwarf needs to be “close to the upper mass limit,” and afterwards the two need to merge into a rapidly-spinning magnetar, which would “inject additional energy into the kilonova.”

Only this combination, he suggests, could explain the oddball nature of GRB211211A.

Beyond the mystery of the explosion itself, says Gompertz, this suggests that astrophysicists have been undercounting the importance of mergers like this to, well, anything heavier than iron. Going forward, this “doubles the rate of mergers we expect,” he explains,” which means it’s doubled the contribution this phenomenon has to every element we have on Earth.”

WHAT’S NEXT — There wasn’t a chance to catch the gravitational wave caused by GRB211211A, which would have definitively explained just what collided a billion years ago to cause the explosion. Luigi Piro, director of research at the Istituto di Astrofisica e Planetologia Spaziali and author of another of the papers, tells Inverse, “the smoking gun of this model would be the observation of gravitational waves from such a long event.” Since astronomers are used to observing the mergers of two neutron stars, they know just what to look for. But if GRB211211A was caused by a neutron star merging with a white dwarf in an unusual way, “then we don’t expect we will see any detectable gravitational event.”

GRB211211A has shaken up what astronomers think gamma ray bursts can look like. “We know there’s overlap between the two categories,” Brendan O’Connor, a doctoral candidate at George Washington University and co-author of one of the papers, tells Inverse. “We’ve seen massive stars collapse and supernovae that create short gamma ray bursts.” But still, “nobody was thinking that mergers could produce something lasting 50 seconds. That’s pushing all the way past the midpoint of the long-duration bursts.”

Going forward, O’Connor says, astrophysicists will have to “take into account a lot of other things” beyond length to categorize these high-energy events, like the environment of the galaxy in which it formed. It also means they’ll have to go back to that archive of the fifty thousand gamma ray bursts observed since the 1970s. After the kilonova event in 2017, astronomers were able to go back to identify past events they had missed.

But still, Troja adds, the distinction between long, supernova-related gamma ray bursts and short, neutron star-driven ones is “engraved in our field.” A fundamental part of astrophysicists’ training, she says, it is one of the first things you are taught in the field. “It’s like when you are a kid and you believe in Santa Claus, and at some point someone tells you ‘No, Santa Claus does not exist.’ And you’re like ‘Whoa, what are you talking about.’ It’s that kind of revelation.”

Last December, astronomers caught sight of an extremely bright, extremely close gamma ray burst that lasted for a little under a minute — close as far as gamma ray bursts, anyways: about a billion light-years away. Ordinarily, it would be interesting, but nothing groundbreaking, something to be filed away with the tens of thousands of…

Last December, astronomers caught sight of an extremely bright, extremely close gamma ray burst that lasted for a little under a minute — close as far as gamma ray bursts, anyways: about a billion light-years away. Ordinarily, it would be interesting, but nothing groundbreaking, something to be filed away with the tens of thousands of…

15 years ago, a forgotten steampunk epic was killed by controversy