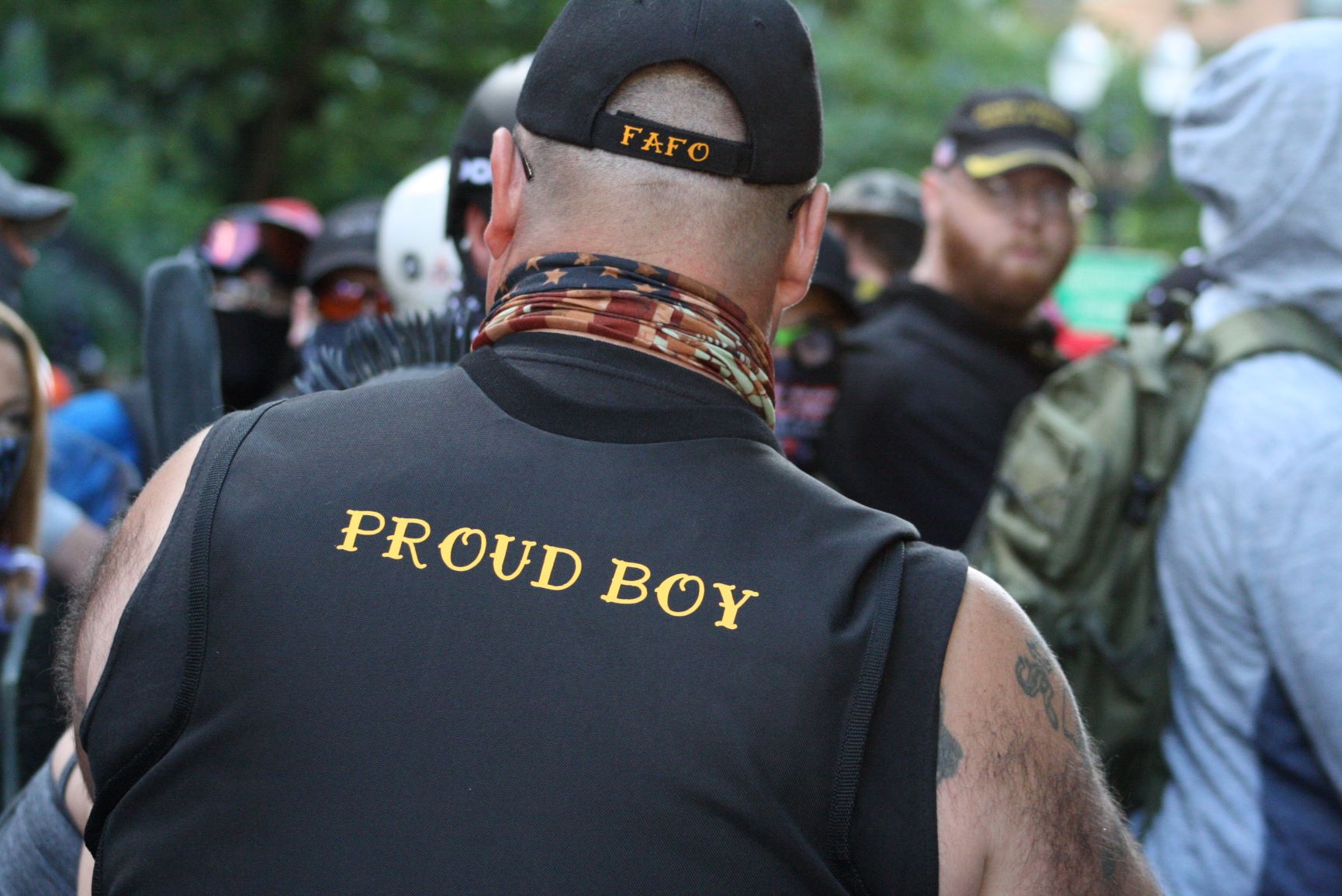 A holiday drag story time event was canceled in Columbus, Ohio, after the Proud Boys and other right-wing extremist groups showed up in force.

On Saturday, scores of Proud Boys dressed in the signature black and yellow uniforms and members of Patriot Front, some of whom were armed, rallied outside of the First Unitarian Universalist Church, which was hosting the event. Alleging that the story time event amounts to “grooming”—the rhetoric at the heart of recent political attacks on LGBTQ people—the Proud Boys held signs with messages like, “Groomers make Santa sad” and “Groomers go home.” Another read “Proud Boys Story Hour Today’s Book Death of the West Chapter 9,” in an apparent reference to a book authored by far-right activist Pat Buchanan, who fearmongers about immigrants replacing “America’s white majority.”

Other videos show Proud Boys members dancing to the “YMCA,” the unofficial LGBTQ anthem, and a police officer acknowledging that he high-fived a Proud Boy because he had complimented his mustache.

On Dec. 3, the day of planned event, Cheryl Ryan, the school’s manager announced its cancellation. Taking the church’s stage decorated by kids who had planned on listening to stories that afternoon, she said the school had canceled the event after an internal debate over “how this community could be best protected.” Ryan said she called the Columbus Police and was initially told they could hire a special duty officer “who may or may not show up because they’re understaffed,” while a “community defense team” they hired felt uncomfortable with a police presence. Ultimately, the event was canceled when the performers said they were uncomfortable performing without a police presence.

“The world is getting more and more unsafe for the LGBTQ community; the attacks are constant and getting worse,” Ryan said. “The fact that we not able to successfully host this simple event shows the extent of the damage. We have to do better.”

“I implore this community’s leaders to consider how this could’ve gone differently,” she said at another point in her speech. “How will they do better for next drag story time the Proud Boys threaten to show up at again, which they will.”

“You’re damn right we will. That’s a promise,” the Official Cape Fear Proud Boys responded in a post on Telegram, painting her speech as “unconditional surrender.” “Not once did she acknowledge the groomers who are truly responsible for the Proud Boys showing up. If you don’t want Proud Boys outside your drag event, don’t invite children.”

“We will be watching, and We. Are. Everywhere,” read another Telegram post by the Proud Boys Ohio.

One commentator responded to the video with a meme that stated, “KILL IT WITH FIRE.”

For its part, the Columbus Police disputed the school’s account that they were absent and said they tried to work with the school and the church. On Monday, the police chief issued a message to the community after an officer was seen high-fiving a Proud Boys member, claiming that the dialogue team member’s action “was not done to show solidarity but to diffuse a tense situation.”

“I along with the officers in the department stand fully with the LGBTQ+ community. No one should be intimidated, harassed, or threatened just because of who they are or whom they love. As a division historically, we know there has been a disconnect between members of this community and our department. We have worked and will continue to work hard to strengthen those relationships,” Police Chief Elaine Bryant said. “We will not stand for extremist groups to come into this city and cause violence.”

Department of Homeland Security issued a new bulletin last week that added the LGBTQ community to groups under threat of potential domestic terror attacks. That followed the shooting at a LGBTQ night club in Colorado in which five people were killed and 25 others were injured.

The cancelation of the Columbus drag story time stands in stark contrast to others that have proceeded with police support amid right-wing extremists’ vows to disrupt them. In Lakeland, Florida, right-wing extremists rallied outside a drag charity event, holding Nazi flags, shouting profanities, and recording attendees. Police were called in, and the show went on. DeShazo, the host and a performer of that event, told local news station WFLA that he was satisfied with how Lakeland Police responded to the incident.

“I think they did well at being neutral but also making sure we were safe and they came in several times to check on me and check on our people. So I’m happy with the way they responded,” said DeShazo.

A holiday drag story time event was canceled in Columbus, Ohio, after the Proud Boys and other right-wing extremist groups showed up in force. Red Oak Community School and the First Unitarian Universalist Church had advertised its “Holi-Drag” story time charity event for kids last month. Shortly after, members of the Proud Boys announced plans…

A holiday drag story time event was canceled in Columbus, Ohio, after the Proud Boys and other right-wing extremist groups showed up in force. Red Oak Community School and the First Unitarian Universalist Church had advertised its “Holi-Drag” story time charity event for kids last month. Shortly after, members of the Proud Boys announced plans…