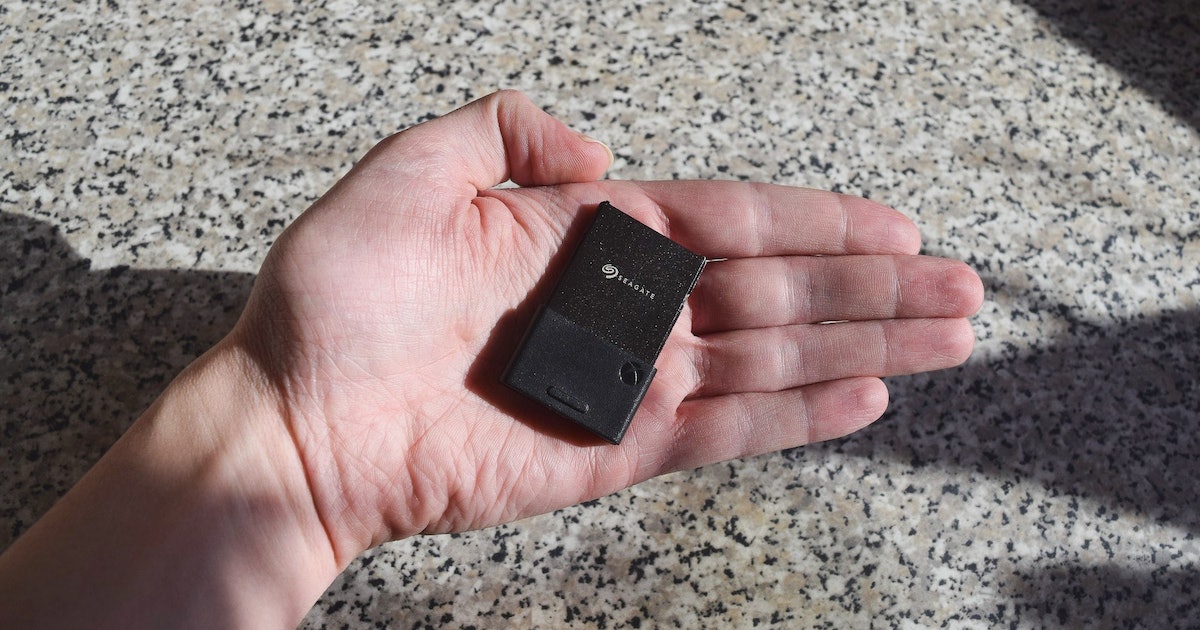 I’m going to level with you all: storage is not a sexy tech topic.

But fortunately for us, I’m not in the business of lulling anyone to sleep with the doldrums of overexplained tech specs. In fact, I intend to do the opposite. It’s time to wake up, console gamers; it’s time to open your eyes to the glory of high-speed storage; it’s time to behold… the Seagate expansion card.

This is Seagate’s 1TB Xbox Series S/X expansion card. I’ve owned one for about a year now, and I can firmly say, once I slotted this bad boy into the back of my console, there was no going back.

If you’re unfamiliar with Seagate and its mighty expansion cards, let me start from the top: they’re mini solid-state drives built specifically for your Xbox. Simply slot them into the back of your Xbox S/X, and presto you’ve got more storage.

Being able to add storage to a game console is nothing new, of course — Xbox consoles have come equipped with USB ports for years now — but it’s the way that the storage works that makes Seagate’s cards so magical.

Seagate’s expansion cards leverage an increasingly popular tech in the world of storage called NVMe — a protocol that allows super fast read/write speeds between the storage unit and your device’s CPU. Think of NVMe as a superhighway straight to your CPU’s front door; one that is paved straight over the anachronistic dirt road built by last-gen SSDs.

The specifics of how NVMe functions don’t really matter in this case. What you really need to know is that Seagate and NVMe solve one giant problem with your Xbox Series S.

Previously, downloading a game onto non-console storage meant that you’d need to transfer the file to your console’s hard drive to play — a time-consuming process that made choosing which games to offload a pained exercise in triage. Which game do I delete, and which game stays? But Seagate’s cards act just like your console’s dedicated storage.

That means you can download a game onto Seagate’s expansion card and play it. That’s it. That’s the trick. It’s so simple, that I’ve not thought about the 1TB Seagate expansion card once since I first received it as a holiday gift. That’s not because I haven’t used it — I have, time, and time again — it’s because it just works.

Xbox’s Series S is a fantastic deal in the world of console gaming, but naturally, having a tiered console scheme (the Series S is $200 cheaper than the premium Series X), means you’ll have to make sacrifices.

One of those sacrifices is in storage. While the Series X ships standard with 1TB onboard, the Series S comes with just 512GB. Not only that, but the amount of actually usable storage in those consoles is, in reality, smaller than what’s advertised. Accounting for all of the necessary software on the console’s drive, effective storage on the S and X is actually 802GB and 364GB, respectively.

Coupled with the sheer size of most modern games, those effective storage amounts make building your library of AAA titles more of a process of elimination than you might prefer. But it doesn’t have to be that way. You have the power to expand… that is, if you have the funds.

What you need to know

Seagate’s one and only catch may be the one you’re most bummed to find out: it’s pricey.

Yes, those prices are steep, but if you know someone (someone with a less spacious Series S, in particular), trust me when I say, this is one gift they will be ceaselessly grateful for. Not only is it endlessly practical, but it’s something that they’re unlikely to buy for themselves — spending $300 on a console and then another $200 on a 1TB expansion card makes the Series S feel a little less practical.

Plus, you can rest easy knowing that there is absolutely no hassle involved in equipping your console with more storage once you’ve got the Seagate expansion card in hand. There’s no re-formatting; there’s no prying your console open; just unsheathe the card and insert it into the card slot on the back of your console.

Every fiber of my being wants to regard added storage (as fast as it may be) as boring backend technology. But every time I try, my perspective kicks in.

This is what 1TB used to look like about 10 years ago.

I don’t care how much (or little) you care about technology, that is an incredible improvement. Marveling at the advancement in storage size and data transfer speeds won’t take away the sting of Seagate’s price tag, but it will help grant some clarity on exactly what you’re purchasing — a piece of our hyper-fast storage future.

I can attest. Maybe sometimes, even in the future-forward world of consumer tech, boring can be a lot more fun than it seems.

I’m going to level with you all: storage is not a sexy tech topic. But fortunately for us, I’m not in the business of lulling anyone to sleep with the doldrums of overexplained tech specs. In fact, I intend to do the opposite. It’s time to wake up, console gamers; it’s time to open your…

I’m going to level with you all: storage is not a sexy tech topic. But fortunately for us, I’m not in the business of lulling anyone to sleep with the doldrums of overexplained tech specs. In fact, I intend to do the opposite. It’s time to wake up, console gamers; it’s time to open your…

Scientists could use a meteor-hunting technique to uncover dark matter