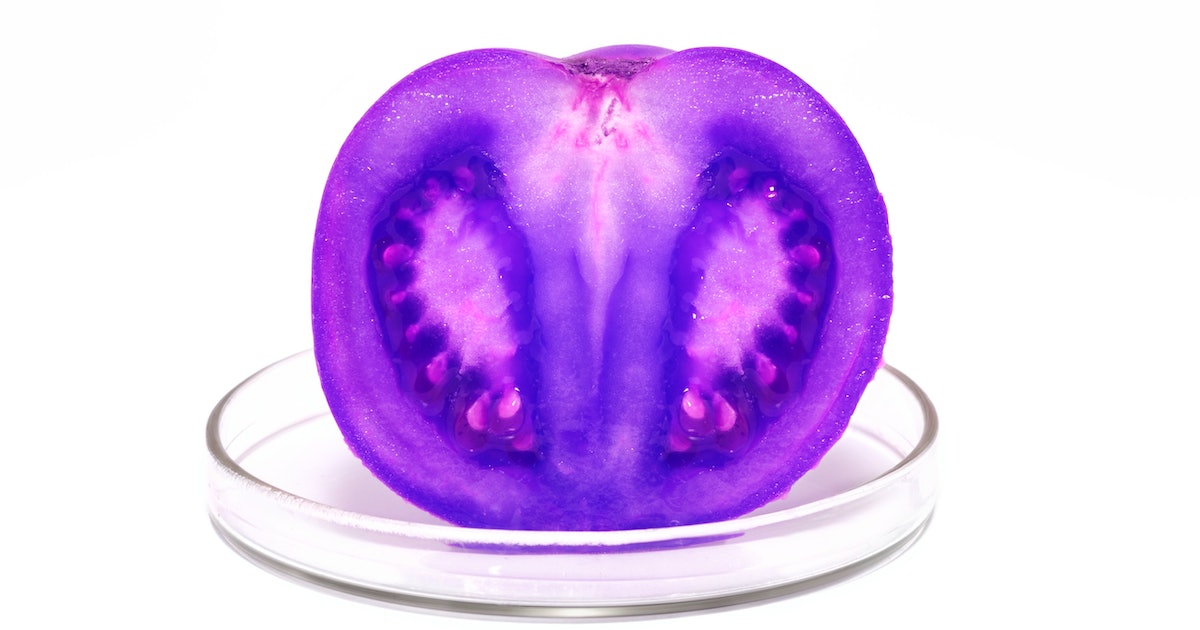 It’s also possible to modify foods to make them more nutritious. Take, for example, golden rice. This grain was engineered to have higher levels of vitamin A in order to tackle deficiencies of this nutrient in impoverished countries.

But despite all the developments in genetically modified foods since 1994, few products have actually made it to the market. The continued ignorance of the general public about GM products, alongside the reluctance of government policymakers in some countries, has impeded the progress of genetically modified foods moving from the lab to the market. This is why the regulatory approval of purple tomatoes in the U.S. this September is so exciting.

For the last 14 years, Cathie Martin and Eugenio Butelli from the John Innes Centre in Norfolk, England, and their team have been working on developing the purple tomato. They aimed to engineer a tomato that contained higher levels of anthocyanins — which can be used alongside unmodified tomatoes to study the benefits of anthocyanins. The team chose to modify a tomato because the fruits are delicious and widely consumed.

Anthocyanins occur naturally in many fruits and vegetables with red, purple, or blue flesh or peel — such as blueberries, strawberries, aubergines, and red cabbages. To produce a purple tomato, the team incorporated genes from snapdragons into the DNA of tomatoes.

The end result of these experiments was a unique fruit — and not just because of its color. They also succeeded in engineering tomatoes that contained high levels of anthocyanins — comparable to the amount found in blueberries — which is beneficial for a number of reasons.

The higher levels of anthocyanins in purple tomatoes work to double their shelf life compared to red tomatoes. This is because anthocyanins help to delay over-ripening and reduce the fruit’s susceptibility to fungus attack post-harvest.

Another benefit of high levels of anthocyanins is that they attract pollinators and animals to disperse seeds, which increases the reproductive success of the plants and their yield. Anthocyanins also protect plants from UV damage and protect them from pathogens, which maximizes their survival.

Anthocyanins may also be good for your health. Studies on other foods containing them have linked them to lower inflammation and lower risk of type 2 diabetes and cancer. They may also protect the brain against diseases such as dementia.

While studies into the benefits of purple tomatoes, specifically on humans, are still ongoing, one study which fed cancer-prone mice food supplemented with purple tomatoes found they actually lived 30 percent longer compared to the mice given red tomatoes.

The future of GM

There have been a number of exciting developments in the field of GM foods in the last few years, including the first genome-edited GABA tomatoes in Japan and vitamin D-enriched tomatoes in the U.K. Both were developed using CRISPR genome-editing technology.

Genetic modification can offer many benefits. Not only might it help us tackle the challenges of climate change by developing more resilient crops, but breeding plants with higher levels of certain vitamins and minerals may potentially allow us to improve health and lower the burden of many common diseases. And GM crops may help us ensure that everyone, regardless of where they live, has access to high-quality fresh produce that’s good for them and the environment.

GM foods are also tightly regulated in many countries, which means that any products which are approved for consumption are safe for human, plant, and animal health.

The greatest challenge now is getting more governments around the world to approve these genetically modified foods for sale. Although the U.K. is ahead of other countries when it comes to regulation of gene-edited crops, it’s currently unknown whether the GM purple tomato will be offered for sale there. But it’s expected that purple tomatoes will be available for sale in the U.S. as soon as 2023.

This article was originally published on The Conversation by Yang Yue at Quadram Institute. Read the original article here.