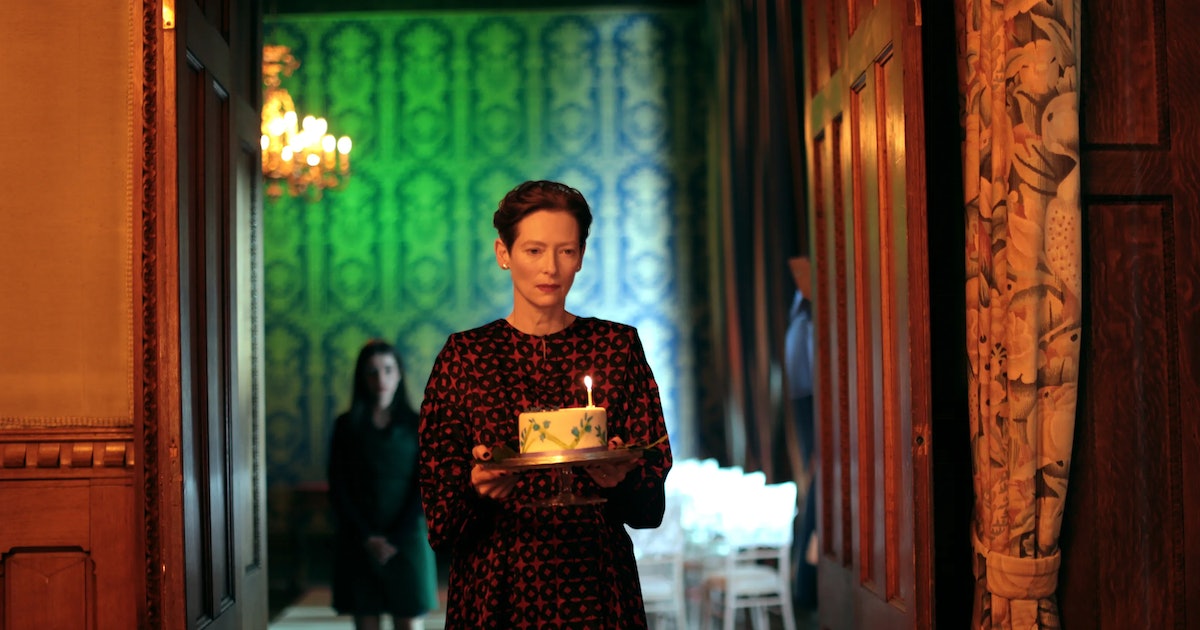 Tilda Swinton haunts herself in a ghost story for the ages

Memories haunt us. They seep through the buildings we live in, the hallways we walk in, and the beds we sleep in, until they settle into our very bones. Our bodies remember every moment of joy and pang of sadness like a phantom pain in our hips, or a prickling of goosebumps on our arms.

Joanna Hogg knows how memories can manifest themselves. The filmmaker explored a tumultuous youthful romance with her deeply personal semi-autobiographical films The Souvenir and The Souvenir Part II, in which Tilda Swinton played the mother of Honor Swinton Byrne’s Julie Hart, loosely based on Hogg herself. Now Hogg teams up with Swinton again in The Eternal Daughter, an eerie gothic horror movie that continues the story of The Souvenir films in an oddly abstract, confoundingly meta, and utterly mesmerizing way.

In The Eternal Daughter, Julie Hart is now a middle-aged filmmaker, played this time by Swinton. But Swinton also reprises her role as Julie’s elderly mother, Rosalind, whose upcoming birthday is the impetus for a trip that Julie and Rosalind take together to an old country-home-turned-hotel, deep in the fog-covered English countryside. They’re greeted by a cold receptionist (Carly-Sophia Davies, sharp and cutting) and a seemingly empty hotel, apart from a solitary groundskeeper (Joseph Mydell, instantly warm) who wanders in and out of the film, doling out alternately gentle and ominous advice like a combination of the kindly chef and the bartender from The Shining.

But if no one else is in the hotel, why do things go bump in the night? Why does Julie keep seeing visions of strange women in the windows, and hearing whispers that seem to come from the walls themselves? And why has her mother become so distant since arriving at this crumbling old house?

In the simplest terms, The Eternal Daughter is a haunted house movie. But the thing haunting Julie isn’t a vengeful spirit or a ghost, but history. “The rooms hold stories,” Rosalind tells Julie after one particularly awkward and airless dinner, one of many the two take alone in the cavernous dining hall where only the click-clack of the receptionist’s heels can be heard.

Julie slowly pieces these stories together from her mom’s fragmented anecdotes, which spill out of her the more time they spend at the hotel. It isn’t any old refurbished country home — it’s the same building where a young Rosalind hid as a child during the final days of World War II. Julie is curious, careful, and a little guilty about hearing these stories. She brought her mother to the hotel to ask her to be the subject of her next film, a halfhearted attempt to get to know a woman who’s always felt like a bit of a stranger. The film’s practical approach to casting during Covid (there are only four actors) becomes a fascinating echo chamber through which Hogg can play out her dream conversations with her own mother.

How much do we know about our parents? Only what they allow us to know, information doled out in well-meaning advice, nighttime whispers, or over a lonely dinner after a few too many glasses of wine. We get their lives in fragments, and even then it’s hard to understand them as human beings with wants and needs separate from the “parent” label. Hogg turns this classic parent-child dilemma into an ouroboros.

There are endless ways to read the doppelganger casting of Swinton as the middle-aged Julie and the elderly Rosalind. It’s a showcase for Swinton, who brings her particular brand of otherworldly gloom to the film. It’s about how daughters see their mothers as extensions of themselves, or how daughters try to understand their mothers by putting themselves in their shoes, or how we’re only so different from each other after all. A final twist makes one of these readings stronger than the other, but despite revelations learned and secrets told, Rosalind remains a bit of a mystery.

But the answer to that mystery isn’t the point of The Eternal Daughter — it’s the feeling of being caught in the haunted houses of our own making. The isolation of the hotel seeps through every painterly frame. Fog eternally looms over the empty grounds, casting an ominous pall. The silence is suffocating, to the point that every sudden bang in the night is as much a reprieve as a jump scare. It makes every word uttered between Julie and Rosalind feel loaded, not with hostility, but with those unspoken regrets and misunderstandings that fester until they’re no longer innocent.

The Eternal Daughter comes to no happy conclusion about the relationship between mother and daughter, nor does it answer all the questions we may have for our parents. In the end, maybe the best we can hope to do is make peace with our own ghosts.

The Eternal Daughter opens in theaters and on demand on December 2, 2022.

Memories haunt us. They seep through the buildings we live in, the hallways we walk in, and the beds we sleep in, until they settle into our very bones. Our bodies remember every moment of joy and pang of sadness like a phantom pain in our hips, or a prickling of goosebumps on our arms.…

Memories haunt us. They seep through the buildings we live in, the hallways we walk in, and the beds we sleep in, until they settle into our very bones. Our bodies remember every moment of joy and pang of sadness like a phantom pain in our hips, or a prickling of goosebumps on our arms.…