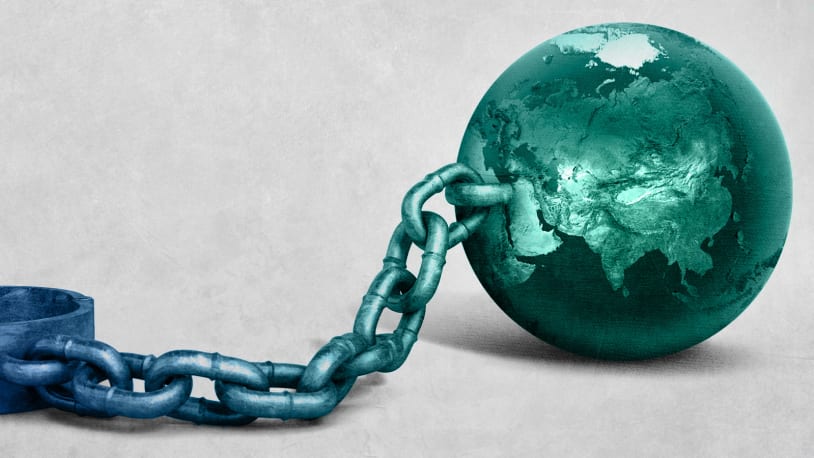 The international problem of modern slavery

While slavery is often thought of as a relic of history, there are many locations around the world where the use of slave labor is still prevalent, with the practice ingrained in society through a variety of means. Here’s everything you need to know:

Sadly, yes. A recent report from the International Labor Organization estimated that at least 50 million people around the world were living in modern slavery. That figure means nearly one out of every 150 people on the planet can be considered to be enslaved. While modern slavery has long existed in the shadows, the ILO reported that the number of modern enslaved people has risen significantly in the last five years — estimates say there are now at least 10 million more enslaved people in the world than there were in 2016.

There are a number of reasons that modern slavery has seen increased numbers, with BBC News reporting that global conflicts and climate change contribute to people leaving their homes to become migrants — something that immediately puts them at risk. The COVID-19 pandemic has also led to a rise in modern slavery due to financial disruptions around the world, BBC News added.

Grace Forrest, the founder of the Walk Free Foundation, told NPR that while modern slavery has adapted and shifted over the years, “exploitation is still occurring on an unprecedented scale” around the world.

So what exactly is modern slavery?

It can take many different forms. The NGO Anti-Slavery International defines modern slavery simply as any scenario “when an individual is exploited by others, for personal or commercial gain.” While some of these forms of servitude may not appear on the outside to be “slavery,” they are considered such nevertheless.

The U.S. State Department lists a number of different instances that fall under the umbrella of modern slavery. Perhaps the most common — and the one that invokes the term “slavery” the most — is forced labor. This occurs when labor is exploited through threats of violence, deception, or coercion to compel somebody to work for them. Once someone is exploited for their labor, the State Department notes that any prior consent to work is irrelevant.

One specific type of coercion mentioned by the State Department is bonded labor or debt bondage. This debt can also be inherited. In South Asia, for example, it’s estimated that millions of victims are forced to pay off the debt of their ancestors. Domestic servitude, forced marriage, and forced child labor are also commonly seen forms of the trade.

Human and sexual trafficking also make up a large percentage of modern slavery, according to the State Department. This involves any sex act, such as prostitution, that is the result of coercion via violence, threats, or fraud. Many perpetrators of sex trafficking are involved in the process the entire way through, from the recruiting of victims to their transportation and solicitation. Similar to forced labor, even if a sex worker initially consents to prostitution, they are considered enslaved as soon as they are coerced or threatened into having sex.

Where does modern slavery occur?

There are 195 sovereign countries in the world, and modern slavery can be found in almost all of them. Most, if not all, of this modern slavery takes place behind closed doors, BBC News reported. This may make it seem as though slavery only takes place in developing countries when the reality is it remains a prevalent problem globally.

A 2018 report from the Thomson Reuters Foundation found that North Korea, Eritrea, and Burundi are likely the three nations that have the highest number of modern slaves. India, China, and Pakistan, meanwhile, were reported to be the trio of countries with the most victims. In all, Africa, Asia, and the Pacific islands were cited as the most guilty regions.

North Korea had by far the highest rate of slavery among the nations listed by Reuters, with the outlet estimating that one out of 10 people in the hermit state are enslaved. Eritrea, a country also known for its significant human rights problems, was next on the list, at 9.3 percent. Following this were Burundi, the Central African Republic, Afghanistan, Mauritania, South Sudan, Pakistan, Cambodia, and Iran.

However, this isn’t to say that modern slavery doesn’t occur in more advanced countries — including the United States. The Global Slavery Index, which was last published in 2018, estimated that the U.S. had 400,000 people living in modern slavery. Many other developed nations had similar stats, according to the index, such as the United Kingdom, which has an estimated 136,000 modern slaves, and France, which had an estimated 129,000.

Yes and no. Many are under the impression that slavery has been universally banned across the globe, and this is true — to an extent. The legal, documented ownership of another human has been abolished throughout the world over the last 200 years. The United Nations also banned slavery in 1948’s Universal Declaration of Human Rights, writing, “No one shall be held in slavery or servitude; slavery and the slave trade shall be prohibited in all their forms.”

However, there are still many countries where modern slavery has not actually been criminalized. Research published in Reuters in 2020 showed that as many as 94 countries — nearly half of the United Nations member states — had no criminal code against slavery. While Reuters noted that almost all countries did have anti-trafficking legislation, many have yet to pass laws against the main components of modern slavery, such as forced labor and debt bondage.

These findings notably go against the assumption that slavery is illegal everywhere, The Conversation noted. While this may be true in principle, the fact remains that there are still dozens of countries where a person cannot be criminally prosecuted for enslaving another person.

What can be done to stop modern slavery?

The fight to end modern slavery remains an uphill battle, but there have been signs in the past few years that some countries are beginning to take action.

A report in Time highlighted the United Kingdom in particular, noting that the U.K. was one of the nations taking the greatest steps to eradicate modern slavery. British officials have introduced anti-slavery legislation in the past decade that would specifically target human traffickers. Other countries, including France, the Netherlands, and Australia, have introduced similar bills, per Time.

These laws have a number of caveats aimed at reducing modern slavery. In the U.K., for example, the Modern Slavery Act of 2015 requires any company with revenues over $45 million to publish an annual slavery and trafficking report. The state of California introduced similar legislation, Time noted, and numerous countries around the world have followed suit.

The United Nations has also adopted Dec. 2 as the International Day for the Abolition of Slavery, which highlights worldwide efforts to bring modern slavery to an end. In addition, the Program to End Modern Slavery, adopted by the U.S. State Department in 2017, has raised $150 million to date and helped reduce human trafficking in 24 countries.

While slavery is often thought of as a relic of history, there are many locations around the world where the use of slave labor is still prevalent, with the practice ingrained in society through a variety of means. Here’s everything you need to know:  Slavery still exists?  Sadly, yes. A recent report from the International…

While slavery is often thought of as a relic of history, there are many locations around the world where the use of slave labor is still prevalent, with the practice ingrained in society through a variety of means. Here’s everything you need to know:  Slavery still exists?  Sadly, yes. A recent report from the International…

Why did Merrick Garland appoint a special counsel to investigate Trump?