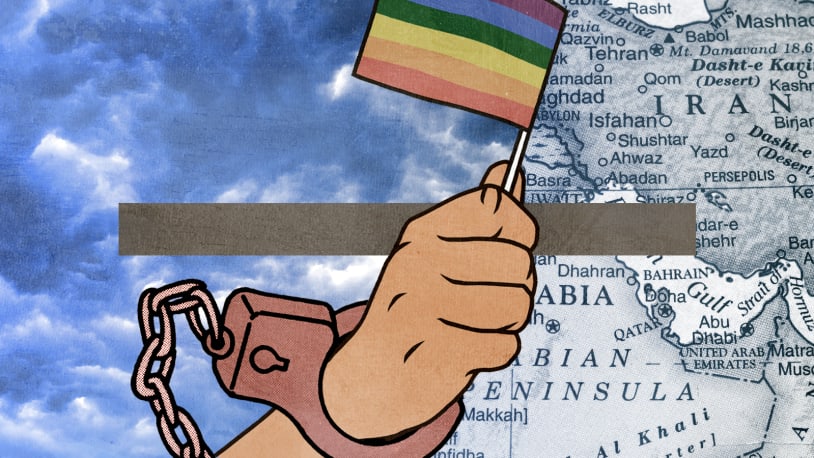 The dangers faced by LGBTQ people in the Middle East

With the 2022 World Cup being held in Qatar, much attention has been placed on the country’s strict laws regarding the LGBTQ community. However, Qatar is just one of a number of nations in the Middle East where LGBTQ people face significant hurdles and marginalization of their rights. Here’s everything you need to know:

How is LGBTQ activity criminalized in Middle Eastern countries?

While there is no standard response, the answer to this question is — generally, pretty harshly. Human Rights Watch reported that LGBTQ activities are heavily criminalized in a large percentage of Middle East countries, as well as countries in the “Greater Middle East” region and parts of North and Northwest Africa.

Algeria, Morocco, Oman, Tunisia, Syria, Yemen, and part of Palestine have codified laws specifically prohibiting same-sex acts, HRW noted. Furthermore, Kuwait and Sudan prohibit sex between men, and Bahrain has passed laws allowing the detention of people who are even suspected of being homosexual.

In many of these countries, all sexual intercourse outside of marriage is illegal, including among heterosexual couples. Libya even describes sex with a person out of wedlock as sexual assault.

While Middle Eastern countries have different laws codifying these bans, HRW reported, “Almost all Arabic-speaking countries in the Middle East and North Africa region criminalize forms of consensual adult sexual relations which can include sex between unmarried individuals, adultery, and same-sex relations.”

What is the punishment for those who break these anti-LGBTQ laws?

That answer, once again, depends on the country and the crime in question.

Often, people who are found to be in an LGBTQ relationship are subject to a variety of punishments. A report from the International Lesbian, Gay, Bisexual, Trans and Intersex Association (ILGA) shared by The Jerusalem Post described a process of “state-sponsored persecution” among people who were caught partaking in LGBTQ activity. Much of this involves harsh imprisonment, with the ILGA report particularly examining Iran — a country in which “those who are imprisoned are reportedly subjected to torture or otherwise dire conditions, with most gay and trans detainees … held in isolation with only limited access to fresh air, light, food, or phone calls to family.”

Perhaps most notable, though, is that several Middle Eastern nations have made LGBTQ activities punishable by death. As the ILGA report noted, this includes Iran, where their penal code can impose the death penalty for “sodomy,” gay sex acts, lesbian sex acts, and more. Iran has reportedly “engaged in mass killing of gays and lesbians,” with the Post previously reporting that up to 6,000 LGBTQ people have been executed since the 1979 Islamic Revolution.

While many of these death penalties are carried out by countries under insurgency rule, there are reportedly a number of countries where the execution of homosexuals is state-sponsored. This includes Saudi Arabia, Yemen, Pakistan, Qatar, and the United Arab Emirates, countries the Post said may all be able to legally enforce the death penalty. HRW reported that the Northwest African country of Mauritania has even made “death by public stoning” legal for homosexual men.

There is significant focus on Qatar due to the 2022 World Cup. Despite being one of the smallest countries in the region, Qatar, like many others around it, often continue to make life hard for its LGBTQ citizens. Laws in Qatar are similarly strict, and Reuters spoke to four gay men living in the country prior to the beginning of the World Cup.

All four spoke on the condition of anonymity due to fear of reprisal, but said they were able to mostly live their lives — albeit in the shadows — due to their privileged status. However, Reuters noted that this experience was rare in Qatar, and many members of the LGBTQ community have reportedly been illegally detained as a result of their sexual orientation.

A separate report from HRW documented alleged beatings and mass incarceration, specifically among transgender women. As a condition of their release, HRW said Qatari security officials often forced these women to attend government-sponsored conversion therapy. “While Qatar prepares to host the World Cup, security forces are detaining and abusing LGBT people simply for who they are,” HRW reported.

Why are these laws in place?

Many Middle Eastern states have a long history of anti-LGBTQ laws, with a variety of cultural reasons contributing to these beliefs. A 2018 article in The Economist documented how homosexuality was criminalized over the years. Notably, the article reported that this was not the view of people in the region hundreds of years ago.

The Economist specifically cited a pair of 13th and 14th-century poets, Rumi and Hafiz, who lived in modern-day Iran and often wrote about homosexual relationships. Additionally, Khaled El-Rouayheb, an academic from Harvard University, told the outlet that “relative openness towards homosexual love used to be widespread in the Middle East,” with gay and lesbian acts not being considered criminal in most Muslim courts.

However, the modern Middle East views homosexuality differently, according to a poll from the Pew Research Center in 2013. Among the nearly 38,000 people polled in 39 countries, the Middle East saw the highest percentage of people who believed homosexuality should be rejected. This included 95 percent of respondents in Egypt, 97 percent in Jordan, and 94 percent in Tunisia who shunned LGBTQ rights.

As The Economist noted, there are a number of factors that led to Middle Easterners feeling this way. Much of the root cause could be traced to Islamic fundamentalism that arose in the 1980s in countries like Iran. However, the outlet additionally reported that European colonialism in the 19th century laid the foundation for this type of sentiment. The U.K. in particular introduced a penal code in 1885 making homosexuality illegal — today, more than half of the countries that criminalize LGBTQ behavior are former British colonies.

How is the rest of the world reacting to these laws?

It should be noted that not every country in the Middle East treats LGBTQ people with such a high level of scrutiny. There are a number of Middle Eastern or Muslim-majority countries where same-sex activity is completely legal, including Israel, Lebanon, Turkey, and Jordan. While homosexual residents may face discrimination in these countries, LGBTQ activity itself is not criminalized.

However, within the countries that do have laws against the LGBTQ community — such as Qatar — there have been concerted efforts from human rights activists to make changes. A number of organizations, such as the Arab Foundation for Freedoms and Equality, promote additional freedoms for the homosexual community, and LGBTQ advocacy groups such as Helem have even emerged in the Middle East.

There is still a long way to go for the advancement of LGBTQ rights in the region, though. At least seven World Cup teams had planned to have their captains wear armbands in support of the LGBTQ community, saying they were even willing to face fines.

After FIFA threatened to penalize them, though, all seven captains abandoned this idea.

With the 2022 World Cup being held in Qatar, much attention has been placed on the country’s strict laws regarding the LGBTQ community. However, Qatar is just one of a number of nations in the Middle East where LGBTQ people face significant hurdles and marginalization of their rights. Here’s everything you need to know:  How…

With the 2022 World Cup being held in Qatar, much attention has been placed on the country’s strict laws regarding the LGBTQ community. However, Qatar is just one of a number of nations in the Middle East where LGBTQ people face significant hurdles and marginalization of their rights. Here’s everything you need to know:  How…

How accurate is The Fabelmans? | The Week