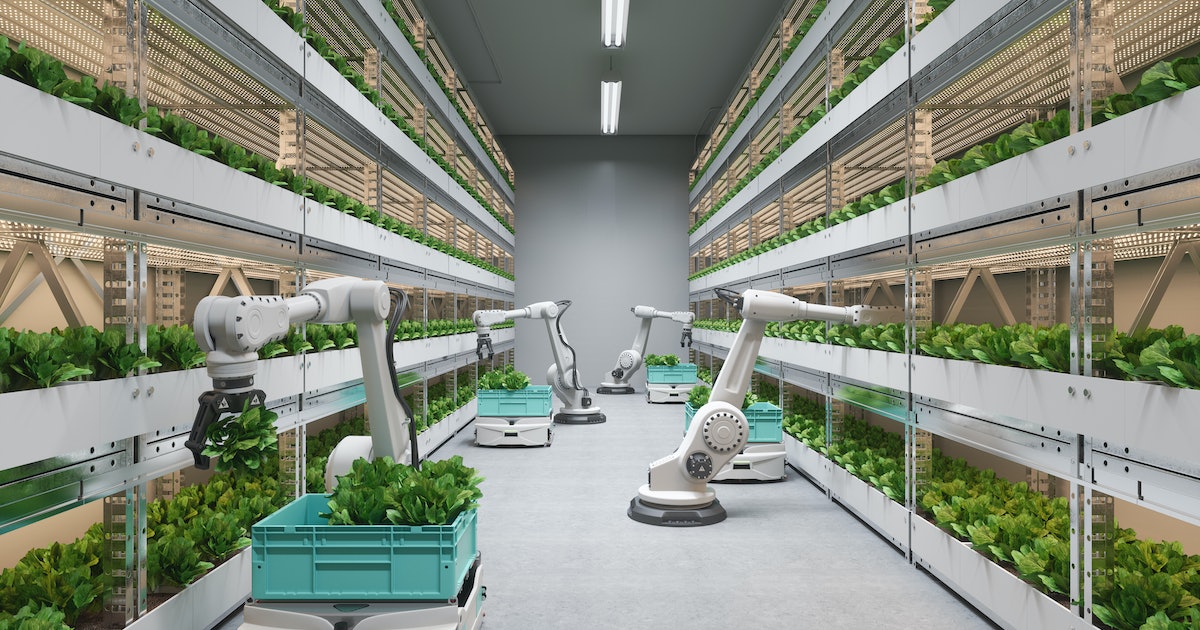 It may not sound like a very sexy invention by today’s standards, but after its debut in 1892, the gas-powered tractor had ripple effects that Silicon Valley startups could only dream of. Suddenly, farming became far quicker and more efficient, allowing growers to drastically increase their yields.

But it also reduced the need for farm laborers, who began flocking to cities for new factory jobs. In 1910, nearly a third of workers in the United States were part of the farming industry. By 1950, that number had fallen to 10 percent.

Now, agricultural workers could face threats from a new generation of gizmos that are transforming the industry. These robots are far more skilled than their mechanized predecessors. “It’s now [a greater] range of tasks and indeed the possibility that might move to a fully automated farm,” says Robert Sparrow, a philosopher who studies the ethics of new technologies at Monash University in Australia.

Large-scale operations are now rolling out technology like drones and robots that can automate nearly every aspect of the process, from planting to picking to spraying pesticides. This trend is most apparent in North America, which is currently the world’s largest market for automation in agriculture.

“I would expect it to be more of the same.”

Even the farming pioneer John Deere is betting on the success of robot-powered farming: In January, the 185-year-old company showed off its fully autonomous tractor, a major step toward its plan for a fully autonomous system for row crops that it aims to wrap up by 2030.

Many of these robotics and AI companies think their products can help feed the world’s growing population amid threats to our food from climate change, wars, and an ongoing agricultural labor shortage.

But similar to the early 20th century, these technological shifts could also exacerbate farming industry monopolies and drive small operations out of business, Sparrow says. “That’s the history of automation,” Sparrow tells Inverse. “I would expect it to be more of the same.”

It may sound like a 21st-century dream, but bot-powered farming isn’t a new idea: Early studies in the 1960s explored the potential of automated steering for vehicles like tractors. Starting around the 1990s, more task-specific devices like an automatic milking system and a melon-harvesting robot came onto the scene.

It wasn’t until recent years that this futuristic field could really take off — drone and robot companies can now make their tech relatively cost-effective and highly functional, says Eric Adamson, co-founder and CEO of Tortuga AgTech.

“None of these ideas are new,” Adamson says. “What’s interesting is that they’re finally being more widely pursued.”

Today, Tortuga AgTech’s signature robot delivers 95 percent accuracy when plucking grapes and strawberries. The roving device also has sensors to gather crucial data like humidity and temperature, and it can zap pests from plants with UV light — potentially eliminating the need for toxic pesticides.

Adamson’s company has deployed 150 bots at large farms in the United States and the United Kingdom, Adamson says, but he hopes to send hundreds around the world in coming years.

Tortuga AgTech is just one of a growing crop of companies developing fancy farm robots. Besides plucking produce at superhuman speed, some tools can tackle pesky weeds. California-based Verdant Robotics’ all-in-one machine uses lasers to decimate these unwanted plants, in addition to spraying pesticides with millimeter precision to spare nearby crops.

Today, drones make up the majority of agricultural automatons — some models are relatively affordable and can be adapted for various tasks. These include shooting seeds into the soil, spraying pesticides, and sending out nonchemical pest-control alternatives (insects that prey on pests).

They’re most often used to provide insight into soil and crop health. Large farms now send out drones with multispectral cameras, or a group of cameras that can both capture high-quality photos and pick up on heat signatures.

These lenses can catch variations in the kinds of light reflected by different plants. For example, healthy crops will give off more near-infrared and green light than other wavelengths, and dry soil is associated with lighter colors

For a bird’s eye view of their operations, some farms send out camera-equipped drones to take up to thousands of images of their fields. Sophisticated AI stitches these shots and creates high-resolution 3D maps. These help farmers check on crop growth and estimate yields, says Christian Nansen, a professor of entomology and nematology at the University of California at Davis who studies the applications of drones in agriculture.

AI could also play a central role in controlled environment agriculture (CEA), a trendy form of farming within a meticulously regulated environment — operators can tinker with conditions like lighting, water usage, and the nutrients delivered to plants with high precision. This technique could reduce agricultural land use by as much as 80 percent.

Researchers have used AI to automate irrigation and climate control systems in these contexts, and some experts think that AI and robots could eliminate the need for any human intervention in CEA agriculture — and perhaps farming as a whole.

Downsides to the droids?

It’s unclear how today’s farm workers will fare as bots continue to descend upon fields and greenhouses — but both labor advocates and tech companies have pointed to the pros and cons.

For example, they may threaten the livelihoods of a particularly vulnerable workforce consisting mostly of immigrants. The industry already has some of the country’s worst labor protections and lowest wages. Previous rounds of automation have had dramatic impacts: Tomato harvesting machines introduced in the 1960s contributed to the loss of around 32,000 farm work jobs.

But robotics companies claim they’re helping solve the farming labor shortage, which has resulted in part from stricter immigration rules and demands for higher wages. Some projects currently in the works could skirt these issues by requiring zero human employees out in the field.

This could be a good thing: Some of these emerging technologies could eliminate the need for people to do back-breaking, often dangerous work that perhaps shouldn’t be done by people in the first place, Sparrow says. “Farming is quite a dangerous profession,” he explains. “Taking people out of farming has obvious advantages in terms of safety.”

Automating farms could also (theoretically) create new jobs, according to some bot manufacturers. Robots will always require human maintenance, Adamson says, because even “smart” machines will still break down, just as cars have always needed fixes. Adamson even ended up hiring an employee from one of the farms he works with. He says his new colleague never thought he’d end up in the robotics field — now, he’s now learning how to maintain them.

Overall, this type of transition can help farm laborers end up in higher-paying jobs, according to Adamson. “Co-robotics means opportunities for everybody and a better farm life for everybody.”

Some of the new products are specifically designed to work alongside humans, like the Burro. This wagon-like device with chunky wheels uses computer vision, GPS, and AI to follow people around and haul produce, tow carts of plants, and scout for crops. Burro is already zipping around California vineyards and is currently working on bringing more than 500 robots into the world to meet customer demand.

Before we see automatons take over farms, there’s still plenty of technical progress to be made. For example, today’s robots struggle in unstructured environments, Sparrow says, which currently includes the majority of agricultural businesses — though new types of greenhouses and vertical farms are extremely orderly, making them a lot easier for bots to navigate. Researchers also need to improve aspects like battery life and robots’ ability to grasp various objects.

As things improve, Sparrow worries that the flurry of robots and AI moving into farms could put growers under corporate surveillance from tech companies. They’ll be amassing plenty of information that can make or break a farm, including soil moisture. “That information is valuable, so people have concerns over who has access,” he says.

And it isn’t yet clear who will own all of this data. The price of a farm’s soil or crops could be affected if certain information is sold or leaked. If this data makes its way to banks, farmers may be denied loans based on their soil or crop quality, Nansen points out.

If tech giants monopolize this market, it could become easier for hackers, political enemies, or even the agtech companies themselves to take down the large swaths of farms they serve, Sparrow adds.

Moving forward, Sparrow worries that robots and AI may not be the best solution to manage our food supply in a warming world. Industrial agriculture is already a major driver of climate change, and some experts think supporting small farms that produce a diversity of crops will prove more resilient than massive monoculture operations.

“There’s always going to be uncertainty.”

He also notes that wealthier countries could more easily automate than developing nations, which could worsen existing inequalities and leave many of the world’s farmers behind.

“If you think that we should be moving toward a small-scale, biodiverse, resilient agriculture, robotics and automation are probably a step in the wrong direction,” he says.

Despite the numerous unknowns, Adamson predicts that there will always be some sort of human role needed to keep farms running. It’s helpful to automate tedious work and technology could help reduce farm size, but not all tasks can be performed by bots — especially in a future that will likely be riddled with unpredictable weather, droughts, conflicts, and pests that all put pressure on the food supply.

On farms, “there’s always going to be uncertainty in what’s going to happen in the next four to 24 weeks, but we may have better tools to react quickly to the big stressors,” Adamson says.

Growers only have so many years to get things right, and a spell of disease or drought can doom an entire season. But “if we have the ability to react more quickly on farm changes, then we also might unlock a lot of innovation.”

It may not sound like a very sexy invention by today’s standards, but after its debut in 1892, the gas-powered tractor had ripple effects that Silicon Valley startups could only dream of. Suddenly, farming became far quicker and more efficient, allowing growers to drastically increase their yields. But it also reduced the need for farm…

It may not sound like a very sexy invention by today’s standards, but after its debut in 1892, the gas-powered tractor had ripple effects that Silicon Valley startups could only dream of. Suddenly, farming became far quicker and more efficient, allowing growers to drastically increase their yields. But it also reduced the need for farm…

Inside the scientific quest to future-proof corn, America’s favorite side dish

The 9 best universal chargers for your laptop in 2022