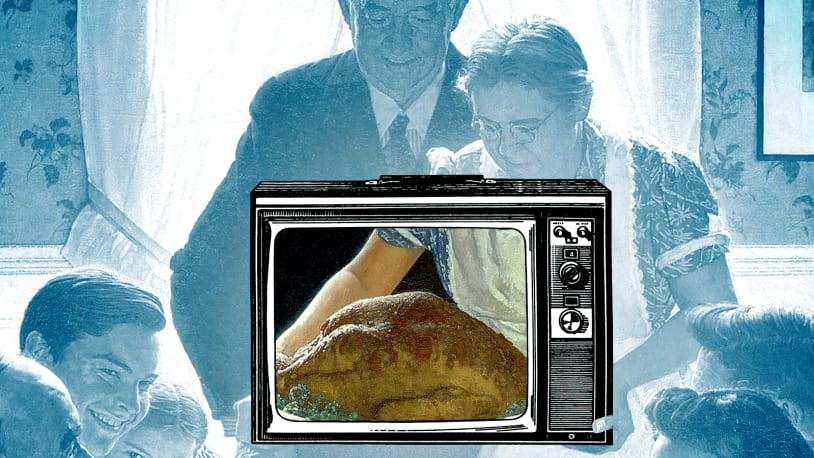 It’s that time of year to give thanks … to TV shows that still take the time to have a Thanksgiving episode. These days, episodes devoted to Thanksgiving have become a bit less common, in part due to the rise of entire seasons dropping at once. But there have been tons of classic Thanksgiving episodes throughout TV history, which should help put you in a festive mood in 42 minutes or less. Here are some of the best:

Friends Season 6 Episode 9: “The One Where Ross Got High” (HBO Max)

Friends is without a doubt the king of Thanksgiving episodes. Some sitcoms might have one or two during their run, but Friends celebrated the holiday almost every year, and the Thanksgiving episodes were arguably even better than the Christmas ones. The best is debatable, but our pick is season six’s “The One Where Ross Got High,” which sees Monica’s parents come over for Thanksgiving after she has started dating Chandler, whom they dislike thanks to a lie Ross told years ago. The highlight, though, is Rachel helping Monica cook Thanksgiving dinner, only to accidentally make a bizarre dessert concoction after combining the recipes for an English trifle and a shepherd’s pie. The group is forced to make it seem like nothing’s amiss, leading to some all-time great “struggling to pretend you like terrible food” acting.

You can’t go wrong with any Friends Thanksgiving episode, though. The rest are:

Six seasons and a Thanksgiving episode! With the Community movie finally on the way, now’s the perfect time to revisit the cult classic sitcom, which had one Thanksgiving episode in its fourth season. Unfortunately, it occurred in the so-called “gas leak year,” the season universally acknowledged as the weakest given creator Dan Harmon was absent. Despite that, “Cooperative Escapism in Familial Relations” is one of its more solid outings, and it’s crucial to Jeff’s character arc. The episode sees Britta join Jeff on his long-awaited reunion with his estranged father, played by James Brolin, while everyone else spends Thanksgiving with Shirley. They end up hiding out in the garage the entire time to get away from her family, turning the episode into a parody of prison break movies. Boot this one up while giving thanks to Peacock for saving us from the darkest timeline where a Community movie never happens.

Master of None‘s Thanksgiving outing also might just be the single best episode of the entire series. Breaking from the usual format, it focuses not on Aziz Ansari’s Dev but on his friend Denise, played by Lena Waithe, telling her coming-of-age story by looking at six different Thanksgivings from throughout her life. In a touching fashion, it explores Denise’s journey coming out to her mother and getting her family to accept her sexuality. But despite the dramatic weight, it’s not entirely free of laughs — as in a sequence with Denise’s absurdly annoying new girlfriend whose Instagram handle Dev can’t help but mock. Best of all, the episode tells a complete story with a beginning, middle, and end that can be appreciated without the context of the rest of the series — though if you like it, be sure to check out season three, in which Ansari again takes the backseat and focuses on Waithe’s character.

Guess who’s coming to dinner? Brooklyn Nine-Nine has a few strong Thanksgiving episodes to offer, but the funniest might be this one from season four, which is also the first to introduce Jimmy Smits as Victor Santiago, Amy’s father. Jake and Amy are dating at this point, so when her father comes out for Thanksgiving, Jake is desperate to impress. But he and Victor unexpectedly end up working together when Jake thinks he may have cracked one of Victor’s unsolved cases from when he was a cop. Meanwhile, the precinct gathers for Thanksgiving at Amy’s apartment and a live turkey gets loose. Come for all that, but stay for the subplot pairing Holt and Adrian after the former lends the latter money that he immediately goes and bets. Really, what more could you ask for from a sitcom than Andre Braugher providing sassy live commentary on a dog show?

Another fun outing is season one’s “Thanksgiving,” which has a solid arc about Jake coming to appreciate the holiday and the importance of found family — though since that’s early in the series, prepare for the weird moment you realize Stephanie Beatriz didn’t quite have the deep Rosa voice ironed out by that point. Also don’t forget “Two Turkeys” from season five, which features Smits’ return while throwing in Bradley Whitford as Jake’s father.

Why not spend Thanksgiving with characters so loathsome, they’ll make even your worst family members look like saints? In this season nine episode, the gang’s Thanksgiving plans run into roadblocks when they realize they’ve made enemies all over Philadelphia. So they use the holiday as an opportunity to end some of these feuds, inviting various people who hate them to dinner in an attempt to bury the hatchet. Picture the Seinfeld series finale, but over Thanksgiving dinner, starring an endless parade of characters the group has upset over the years — including Jimmi Simpson, having a lot of fun as one-eyed Liam McPoyle. Obviously, the gang isn’t interested in truly making things right but simply forcing everyone to sign a peace treaty for their own selfish purposes — and the episode ends with a shocking beat that’s dark even for this show’s standards. But really, what could feel more like Thanksgiving than a bunch of years-old grudges being thrown together with explosive results?

Cheers‘ “Thanksgiving Orphans” comes during a sweet spot for the show: After the introductions of Frasier and Woody but before Diane’s departure. From season five, the episode takes the group outside of the bar to Carla’s house for Thanksgiving after they realize many of them have nothing to do for the holiday. Like most Thanksgiving episodes, it descends into a series of arguments and insults, but it’s best remembered for culminating in a massive, hilarious food fight sequence — which reportedly sparked some outrage at the time, even before the age of Twitter, with some slamming the show for supposedly wasting food. The episode is often considered one of Cheers‘ best, with IGN ranking it at number four. The cherry on top is the final gag paying off the running joke of us never seeing Norm’s wife Vera; it almost feels like the food fight was reverse-engineered around this moment.

The West Wing Season 3 Episode 8: “The Indians in the Lobby” (HBO Max)

Most of the great Thanksgiving episodes come from sitcoms, and while this pick comes from a drama, it makes the list thanks to a subplot that might as well be from a comedy. In this season three episode of The West Wing which technically takes place the day before Thanksgiving, two Native Americans refuse to leave the White House lobby after having a meeting canceled, leading C.J. Cregg to get involved. “This is going to have something to do with us screwing you out of all your land, isn’t it?” she accurately assesses. The best reason to revisit the episode, though, is a subplot where President Bartlet becomes weirdly obsessed with Thanksgiving meal prep tips, even calling the “Butterball hotline” while attempting to disguise his voice. And yes, over 20 years after this episode aired, the real Butterball hotline is still in operation. Just don’t prank call as President Bartlet … they surely get that a lot.

An honorable mention would be the season two episode “Shibboleth,” which deals with everyone’s favorite White House tradition of the president pardoning a turkey.

If The West Wing got you in the mood for more characters who talk so quickly it’s hard to keep up, head over to Gilmore Girls for the show’s third-season Thanksgiving episode. It sees Lorelai and Rory go on a bit of a Thanksgiving tour around Stars Hollow after committing to attending four different dinners: At Lane’s, Sookie’s (who’s distraught after her husband decides to prepare their turkey by deep frying it), Luke’s diner, and finally Lorelai’s parents’ place. You better believe a big argument ensues there, in this case after Rory reveals she applied to colleges besides just Harvard. Variety ranked this as the eleventh-best episode of Gilmore Girls ever. The MVP award is a tie between Melissa McCarthy as a very drunk Sookie and Sean Gunn thanks to a running gag about Kirk’s disastrous experience getting a cat … who’s also named Kirk.

It’s only appropriate that the show about food service would have some of the best modern Thanksgiving episodes. There’s plenty to choose from in Bob’s Burgers‘ library, but a fan favorite is this one from season four, in which Bob grows furious when someone appears to be setting out to sabotage his Thanksgiving by placing his turkey in the toilet, so he buys more turkeys … that also mysteriously wind up in the toilet. This forces him to continuously and awkwardly return to the supermarket in a fun escalating bit that culminates with the man behind the counter assuming Bob is hitting on him. After Louise does her best Sherlock Holmes impression trying to unravel the mystery, the reveal of who’s behind it all is actually genuinely sweet. Plus, the show does its best to finally give Thanksgiving its own iconic song, which may end up stuck in your head whether you like it or not.

How I Met Your Mother Season 3 Episode 9: “Slapsgiving” (Hulu)

It’s been eight years since How I Met Your Mother had one of the most controversial endings in television history, perhaps just long enough that fans can start revisiting some older episodes without feeling quite so bitter. From season three, “Slapsgiving” is not only a great Thanksgiving episode but arguably one of How I Met Your Mother‘s better episodes in general. A season earlier, the show began one of its longest-running gags after Barney lost a bet to Marshall that gave the latter the ability to slap him five times. The first two slaps were surprises, but for the third, Marshall tells him it will occur on Thanksgiving — forcing Barney to spend the entire holiday wracked with dread. It all culminates in Jason Segel getting to show off his singing abilities with a hilarious slap-themed song, but fair warning: The Ted and Robin-heavy plot in this episode might lead frustrations over the series’ ending to come rushing back.

Those are our picks for some of the best Thanksgiving episodes, but if your favorite shows are missing, here’s an incomplete guide to some others:

November 24, 2022 November 24, 2022 It’s that time of year to give thanks … to TV shows that still take the time to have a Thanksgiving episode. These days, episodes devoted to Thanksgiving have become a bit less common, in part due to the rise of entire seasons dropping at once. But there have been tons…

November 24, 2022 November 24, 2022 It’s that time of year to give thanks … to TV shows that still take the time to have a Thanksgiving episode. These days, episodes devoted to Thanksgiving have become a bit less common, in part due to the rise of entire seasons dropping at once. But there have been tons…

Did James Gunn just dunk on Marvel’s worst movie of 2022? An investigation