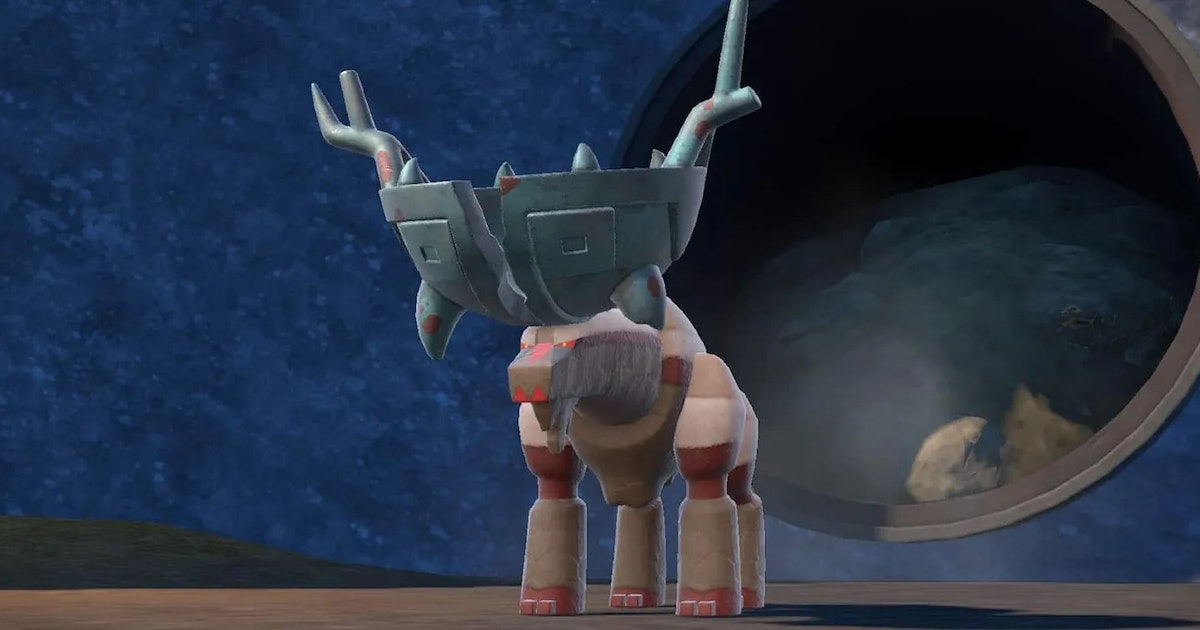 Green Shrine location and how to catch

Koraidon and Miraidon aren’t the only legendaries in Pokémon Scarlet and Violet. After the games were officially released last week, trainers quickly discovered four legendary shrines, each with its own Legendary Pokémon to help complete your Paldean Pokedex. Ting-Lu is just one of these four legendary Pokémon hidden in Scarlet and Violet’s shrines. It’s a Dark/Ground dual-type Pokémon that looks like a deer with a metal bowl on its head and rocks for its body. If the rumors are true, it’s also supposed to be a fairly powerful Pokémon. Here’s how to find and capture Ting-Lu.

Each legendary Pokémon has eight stakes associated with it based on color. Ting-Lu needs green stakes to unlock its door. The color of these stakes should match the color of the shrine door.

At least half of these stakes need swimming or climbing abilities to reach. If you haven’t maxed out your Koraidon or Miraidon’s abilities, now’s the time. The final Titan should unlock climb, which will make finding entering places like Alfornado and uprooting black stakes easy.

These are the locations for all 8 green stakes, which you can collect in any order.

Teleport to Porto Marinada again, but this time pivot toward the beach. Don’t go all the way down to the beach, though. Stay at the top of the hill and nearby the river. Leap across the river toward the edge of the cliff on the next strip of land as seen above. The next stake should be there.

The next stake is on the biggest island in Casseroya Lake. Teleport to either the Glaseado Mountain teleport point or the one on Porto Marinada, and then head straight to the lake. Swim into the lake and toward the island, searching the platform above for the glowing green stake.

There’s another stake on one of the Casseroya Lake islands. Just swim there from the one before (or teleport to either Glaseado Mountain or Porto Marinada again) and search for the glowing green stake on the tiniest island toward the western part of the lake (under the largest island).

You won’t be able to reach this stake without climbing. Once you have that ability ready, teleport to the northern Cascarrafa Pokémon Center and travel all the way to the top of the desert. Climb over the wall and search for the green stake in the land on the other side.

Teleport to any of the waypoints on the light blue portion of the map and travel down toward the river next to West Province (Area Three). There’s a small pocket of land between two mountainous areas marked on the map above, where you should be able to climb and find one more stake.

Unfortunately, there isn’t a teleportation point near the stake north of Casseroya Lake. Teleport to Porto Marinada, which is the closest, and hop all the way across the river and the next couple “islands” toward the edge of the map until you reach the northwestern corner. There’s a platform-ridden section toward the top (marked above) where you need to climb to find the next stake.

This last stake is nearest the shrine where Ting-Lu is. Teleport to either Glaseado Mountain or North Province (Area Three) and travel north toward Socorrat Trail — the brown island-looking thing above Casseroya Lake. At the end of the light blue part of the map, there should be a wall to climb with the final stake on top of it.

Now, it’s time to actually confront Ting-Lu. Its home, the Groundblight Shrine, is tucked away at the center of Socarrat Trail. You’ll know you’re at Socarrat when you’re traveling along the edge of Casseroya Lake and see yellow-orange grass emerge on the mountainside. See the below image for the exact point you can expect to see the shrine door. Look down, not up.

Once all the stakes have been removed, you can challenge Ting-Lu by walking up to the shrine door and interacting with it. Come prepared! Ting-Lu is a Level 60 Dark/Ground dual-type Legendary Pokémon. These few tips should help prepare for the battle.